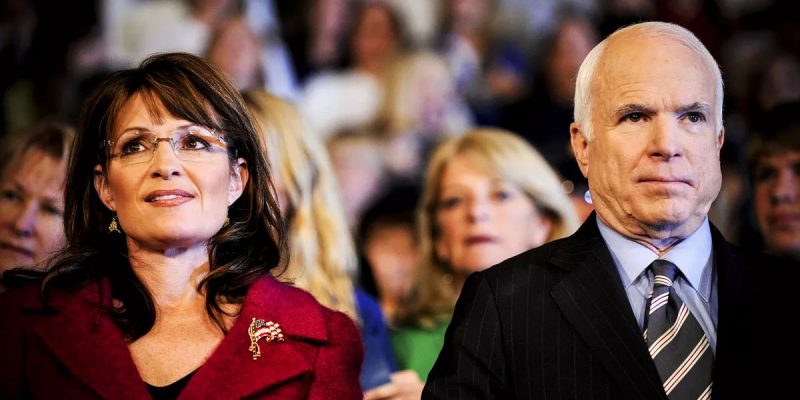 Last week I penned a column expressing appreciation for two things John McCain the politician did, one of which was selecting Sarah Palin for the veep slot.

Many conservatives in 2008 joked, only half-seriously, that they were not so much voting for president but really voting for vice-president.

After this past week, I now regret that the Arizona senator invited the Alaska governor to be his running mate.

It’s not that Palin failed McCain or was a drag on the ticket, as her many detractors in the media, entertainment circles, and most virulently within the GOP establishment claimed.

Polling data from the general election show that Palin was practically a defibrillator for a McCain candidacy that had at best a weak pulse going into the Republican National Convention.

My reason for wishing McCain had chosen someone else is that she didn’t deserve to be subjected to the constant disrespect and backstabbing that came from his campaign operation, and in a final display of classlessness by the senator himself.

McCain owed Palin dignity that was denied to her by the press and his own operatives and instead was shunned from being invited to any of the memorial services held in Washington and Arizona (where Palin owns a home).

Instead McCain chose to be eulogized by the men who defeated him: former presidents George W. Bush and Barack Obama, both of whom expressed surprise that they were asked to play such a prominent role in his funeral. The presidential invitations belie not so much McCain’s familiarity with the two ex-presidents but a craving for status, rank, and prominence.

McCain even had the temerity to have the running mate on the other party’s ticket speak while his own was burdened with yet another cruel humiliation of having to bite her lip while expressing kind words in the midst of what had to be tremendous personal anguish.

Within moments of being introduced to America, the tabloids went after Palin and her family, exposing that her eldest daughter Bristol was pregnant out of wedlock. Rather than properly preparing Palin to engage a hostile media the sloppy McCain campaign acquiesced to the press pushing her before the cameras too early, making a capable reform governor who had booted a fixture in Alaska machine politics out of office into a dimwit.

The caricature of Palin was solidified by mean-spirited hyper-partisan Saturday Night Live talent and it would define her for the rest of her life.

All sorts of nasty rumors (her Down Syndrome son Trig wasn’t really hers, went one fanciful story) and frivolous accusations were made as the left-wing establishment media went on an archaeological dig of Palin and her family while taking Obama at his word about his own exotic life story and his association with radical figures, including the Reverend Jeremiah Wright.

The only way McCain and Family could have insulted Palin worse is if they had sat Levi Johnston in one of the front pews at the National Cathedral.

Yes Palin became a national figure because of McCain but one has to wonder if she would subject herself through the inferno all over again. And in a bit of irony, it was Palin who used her national stature to save McCain’s political career when he was challenged by JD Hayworth in the 2010 GOP primary for his senate seat.

The McCain family had no reservations about inviting Palin to those events.

What the senator, who was very involved with the meticulous planning of his anticipated send-off, and his family did to Palin was not just shameful; it was an unforgivable betrayal more befitting of the lead villain of the Keating Five cabal than this mythical titan of integrity and statesmanship who has been celebrated ad nauseam for over a week.

McCain was no giant of the senate but a political thespian who dressed people down for the television cameras, his list of signature legislative accomplishments not gutted by the courts being paper thin.

If the powers that be insist some kind of tribute should be made, then it should be attached to a new naval vessel. After all, McCain made his name in national politics from his time in Vietnam and not the US Senate.

Sarah Palin deserved better than John McCain, as did the Republican Party.

Interested in more national news? We've got you covered! See More National News
Previous Article Colin Kaepernick To Be The Face Of Nike “Just Do It” 30 Year Reunion Campaign
Next Article Egyptian media: John McCain was beloved leader of the Muslim Brotherhood