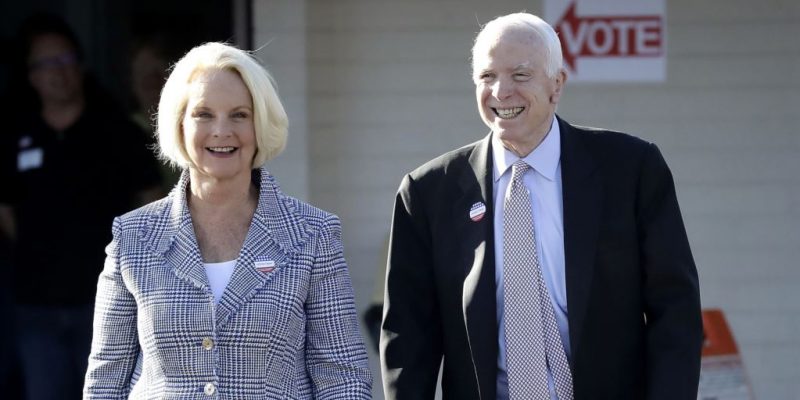 “Mike I need a favor on the quick,” said the political operative’s voice on the other end of the line.

“I need you to throw together a quick speech for McCain.”

Stunned by the sudden request and feeling unqualified to the task on behalf of the de facto GOP presidential nominee, I queried who was the Arizona Senator speaking to and what was the topic.

“We got a two minute window in the opening of WWE Monday Night Raw to make a pitch to pro wrestling fans and our guys don’t know what to write,” said the McCain consultant.

And so the Washington-centric Straight Talk Express had to outsource its appeal to fly-over land to one of its denizens.

To McCain’s credit, he spoke to the hoi polloi with gusto, working in many of the lines I penned in a matter of minutes, particularly my favorite that “he wanted to introduce Osama bin Laden to The Undertaker.”

Several months later when the McCain general election operation was “building” its coalitions groups, I was red-lined out for blogs I had written during the primaries, when I backed ex-Arkansas governor Mike Huckabee.

Apparently pro wrestling wasn’t the only thing the McCain operation didn’t “get” as they wanted only McCain “originalists” on a team that was spiraling towards a landslide defeat.

John McCain was many things- a decorated war hero who endured years of tortures and agony that very few people in this country could possibly comprehend.

And the occupant of the US Senate seat that had once been held by the venerated Barry Goldwater possessed sincere conservative instincts.  There is no confusing McCain’s voting record with that of Arlen Specter.

But there was another side to McCain that infuriated conservative Republican activists – he was as much Washingtonian as he was Arizonan.  And he savored the adulation by the media, and after they kicked him to the curb in 2008, he went running back to their arms like they were an unfaithful paramour he had forgiven.

Throughout his two runs for the White House, McCain came off as he felt that the biggest problem with the Republican Party was that it was full of Republicans.  And McCain seemed to particularly enjoy antagonizing conservative grassroots activists more so the ones on the other side of the political spectrum.

It’s likely that McCain would have loathed Donald Trump just the same even if Trump had not blurted his obnoxious and flippant comment about “captured heroes.”

WWE Hall of Fame inductee Trump literally represented “those people” who McCain had to appease through primary posturing before taking a shower and jetting back to the friendlier confines of the 202 area code.

Trump’s success as a candidate was a greater repudiation of McCain than Barack Obama’s triumph eight years before.

He literally spent his dying days plotting not so subtle jabs at Trump, leaking the president’s disinvitation to his funeral and writing a farewell to America that his “base” in the media would promulgate as his final insult to the president.

To nobody’s surprise Trump made sure to respond to unkind with unkind, sending out an uncharacteristically blasé tweet concerning McCain’s passing and perhaps not letting the flag over his residence flap at half-staff one second longer than spelled out in the US Flag Code.

Though it should be noted that the Trump Administration authorized military transportation for his coffin in addition to providing special military funerary trappings.

This conservative Republican will close with two laudatory recognitions of McCain the politician (as there should be no debate about the valor of McCain the veteran).

First, he inadvertently let the TEA Party genie out the bottle by tapping Alaska governor Sarah Palin as his running mate.  Universally loathed by the Georgetown cocktail party circuit further, it marked the one move that demonstrated that McCain was actually trying to win the election.  Palin energized the conservative wing that had been stifled under the second Bush Administration.  The Palin pick gave McCain his lone opportunity to win, though that was squandered after his suspension of his campaign, a fatal gambit from which he would not recover.

Secondly, the Surge.  Arguably it would be his finest moment as a politician.  With the occupation of Iraq going badly and many voices calling for “cut and run,” he fronted the push by President George W. Bush.  McCain did so knowing that if it didn’t work that it would come to define his presidential candidacy if not end it.  Yet McCain persisted and the increase in boots on the ground stabilized Iraq and kept it from becoming a speed bump in Iranian expansion.

If you think the Mideast is a complicated problem now, imagine if Iran had effective control of a contiguous area stretching from its eastern border with Afghanistan to the Mediterranean shoreline of Syria.

Understanding how the politicians in Washington lost Saigon three decades before, the Arizona senator helped block the Democrats best efforts to transform Iraq into Vietnam 2.0.