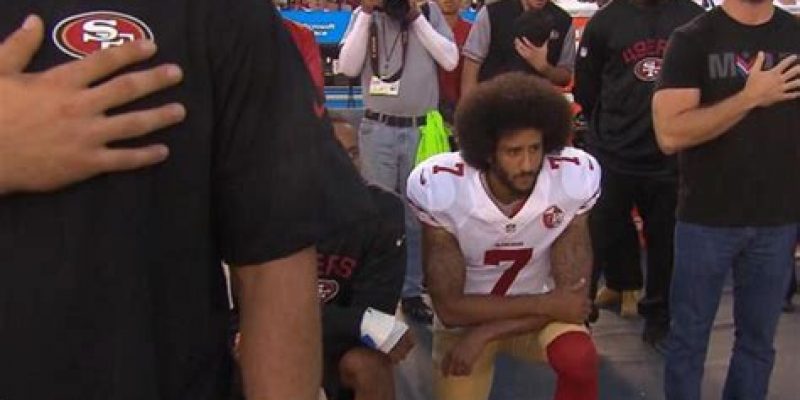 To kick off its 30th anniversary “Just Do It” campaign, Nike selected former San Francisco 49ers quarterback Colin Kaepernick to be the face of it all. Nike could choose any number of elite athletes to represent the Nike swoop. Many alternative candidates are likely much more representative of peak athletic success in 2018 than Mr. Kaepernick, someone who hasn’t seen the field in years.

The only thing that makes Mr. Kaepernick still remotely relevant in the realm of sports is how he started kneeling during the national anthem in preseason of 2016. Since then, kneeling during the country’s most patriotic song while the flag is raised has become quite the fad in the NFL. By choosing this athlete, Nike is knowingly aligning with this movement among professional football players.

Supposedly, Kaepernick is to be held as a great political hero. It is odd then how whenever this entire kneeling controversy began in 2016, Television ratings that showed NFL games began to tank. In the 2016-2017 season, ratings declined nearly 10 percent according to Nielsen. ESPN tracked that an average NFL game earned 1.6 million fewer televised viewers in 2017 compared to the previous year.

If Kaepernick’s movement really had the political backing of the American people, the opposite effect on ratings should be suspected if anything. Despite the evidence that suggests Americans are not pleased with millionaires kneeling during their national anthem, Nike has declared a political allegiance to this agenda.

Afterall, according to Kaepernick’s own tweet, he has sacrificed much in the wake of his actions.

Believe in something, even if it means sacrificing everything. #JustDoIt pic.twitter.com/SRWkMIDdaO

It is difficult to know exactly what Kaepernick thinks he has sacrificed. His football career was pretty much non-existent whenever he became a political activist. He was benched before the first knee hit the ground. Since then, he has acquired stardom through cultural praise from the liberal community. Now, he is even to headline the Nike 30 year reunion “Just Do It” campaign. To be the face of arguably the largest sports brand is an incredible honor. Yet, he is not even on the field.