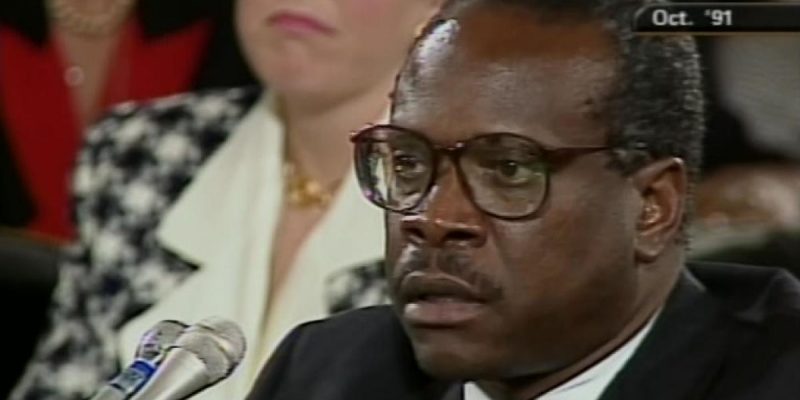 In 1991, Clarence Thomas, nominated for the Supreme Court by President George H. W. Bush, was facing unfair and unprecedented attacks from partisan Democrats.

A former co-worker, Anita Hill, had accused Thomas of making unwanted sexual advances, discussing pornography at work and making a crude reference to a pubic hair on a can of coke. Once her allegations were revealed to the Senate Judiciary Committee, Hill was invited to give her testimony. The nation was riveted as Hill, the alleged victim, totally trashed the good name of a man who had spent a lifetime building his reputation.

In an emotional address to the committee, Thomas denied all of Hill’s claims and said there was no sordid dialogue or romantic interest. He totally rejected the narrative that Hill presented and said he certainly did not pursue her in a sexualized manner.

Judge Thomas lashed out at the “circus” that the Senate had created. He declared that “The Supreme Court is not worth it. No job is worth it. I am not here for that. I am here for my name, my family, my life, and my integrity. I think something is dreadfully wrong with this country when any person, any person in this free country would be subjected to this.”

Thomas decried the “gossip” and the “sleaze” that had been discussed in the Senate Judiciary Committee. He likened the process to a “high tech lynching by a “committee of the U.S. Senate.”

This impassioned defense saved the nomination of Clarence Thomas and he was confirmed by a vote of 52-48. Thank goodness he survived the horrific process and the unfair treatment from the Democrats. Throughout his career on the Supreme Court, Judge Thomas has distinguished himself as an originalist, holding firm to the constitutional views of our Founding Fathers not the judicial whims of the day.

If Judge Brett Kavanaugh also hopes to become a member of the Supreme Court, he must emulate Clarence Thomas when he appears again before the Senate Judiciary Committee. Like Thomas, Kavanaugh has been slimed by unproven and scandalous charges of sexual misconduct. His accuser, Dr. Christine Blasey Ford, claims that Kavanaugh groped her, put his hand over her mouth and tried to remove her clothing. She said the incident happened when they were teenagers at a friend’s party. Ford also maintains that she was worried that Kavanaugh might have “inadvertently” killed her during the attack.

Ford does not remember the exact location or date of the party, nor does she remember how she arrived at the party or how she left. Nevertheless, she claims to be positive that her attacker was a 17-year old Brett Kavanaugh.

In response, Kavanaugh “categorically and unequivocally” denies the accusations and said he wants to testify before the committee to “clear my name.” When he does testify, Kavanaugh should not be reserved or docile. Instead, he needs to follow the example set by Clarence Thomas and forcefully deny the charges.

Just like Thomas, he will have to fight for his position on the Supreme Court. Reminiscent of the Thomas confirmation battle, Democrats have set many traps for Kavanaugh. He has been subjected to days of hearings and thousands of questions, but the charges from Dr. Ford were revealed after the hearings were finished. In fact, U.S. Senate Diane Feinstein (D-CA) held on to this information for almost two months before releasing it to the public.

After Dr. Ford’s accusations have been made, Kavanaugh’s reputation has been totally slimed.  Even though Kavanaugh has an unblemished judicial record and has served his country with distinction for decades, he will forever be associated with these charges. Never mind that he is a volunteer basketball coach or helps feed the homeless, some people will only view him as an accused rapist.

Democrats know how to play this tawdry political game. Their alleged victim, Dr. Ford, scrubbed her social media accounts, hired a left-wing attorney and took a lie detector test. Clearly, she knew that her name was going to be revealed. It looks like it was completely orchestrated.

In another connection to the Judge Thomas confirmation battle, Dr. Ford is being represented by Ricki Seidman, a “communications strategist,” who advised Anita Hill in 1991. Thus, this whole soap opera, created by Democrats, has come full circle.

Republicans must stand firm, schedule the hearings and take a vote. Prior to that critical decision, Judge Kavanaugh will be given the opportunity of a lifetime to clear his name and secure his seat on the Supreme Court. Let’s hope he studies how Clarence Thomas so effectively accomplished those goals 27 years ago.