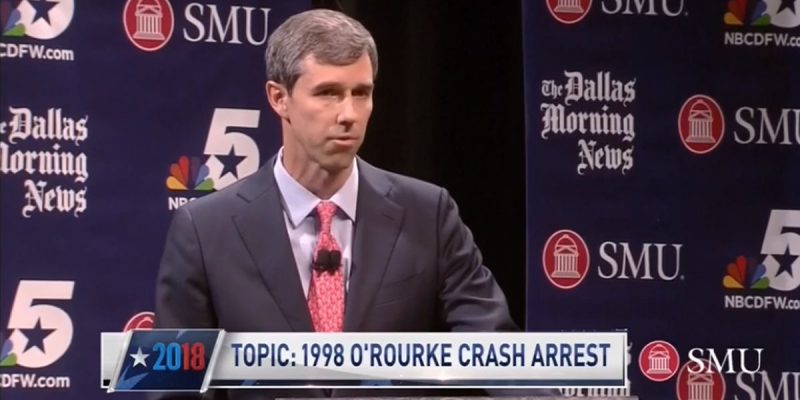 Watching O’Rourke take on Ted Cruz in Friday’s U.S. Senate debate held at SMU, it was hard to notice much other than the rather bizarre way the veins in his awkwardly protrusive neck kept bulging out when he spoke. But as to substance it was quite obvious O’Rourke has had some catastrophically bad campaign advice, and he appeared to follow it religiously.

O’Rourke took every opportunity to run to the far left during the debate, which made Cruz’ job easy. All he had to do was to keep pointing out things O’Rourke said which put him far outside Texas’ political mainstream – on socialized medicine, on taxes, on the impeachment of the president, on the Brett Kavanaugh appointment, on the border and on other questions.

But the worst moment for O’Rourke most certainly came when he was asked about an event in his past which likely disqualifies him as a U.S. Senator – a DWI arrest in 1998 in which not only was his blood-alcohol level a sky-high 0.136, but that he’d caused a traffic accident and had attempted to leave the scene. O’Rourke spent most of his answer blathering about how fortunate he was to have a second chance because people of color without his white privilege don’t get one and this is a great wrong in American society, or some such iteration of the usual Democrat Party narrative.

Except O’Rourke denied he’d tried to leave the scene of the accident. And that, it turns out, was enough of a gaffe to get the national press involved.

The Washington Post, which slapped Four Pinocchios on O’Rourke for what it says was an out-and-out lie. Here’s how the Post treated the facts of O’Rourke’s DWI arrest…

About 3 a.m. Sept. 27, 1998, in Anthony, Tex., a suburb 20 miles north of El Paso, police officer Richard Carrera was dispatched to the scene of a motor vehicle collision on Interstate 10 about a mile from the border with New Mexico.

He met with the driver, identified as Robert Francis O’Rourke, and asked him what happened: “The defendant advised in a slurred speech that he had caused an accident,” Carrera wrote in his complaint charging O’Rourke with driving while intoxicated.

In another report in the records, filed with the Texas Department of Public Safety, Carrera wrote that the “defendant was unable to be understood due to slurred speech” and that he had “glossy eyes” and “breath that smelled of an alcohol beverage.” When Carrera asked O’Rourke to step out of the vehicle, he “almost fell to the floor” and was repeatedly unable to complete a test of standing on one leg. He “failed by totally losing his balance.”

When O’Rourke blew into a breathalyzer, the results were a blood alcohol content of 0.136 and 0.134. The legal state limit in Texas at the time was 0.10; a year later, it was lowered to 0.08. With a blood alcohol level of between 0.130 and 0.159, a person experiences “gross motor impairment and lack of physical control. Blurred vision and major loss of balance. Euphoria is reducing and beginning dysphoria (a state of feeling unwell).” For a male of 190 pounds, O’Rourke’s weight as listed in the police report, that blood alcohol concentration is reached after six drinks.

O’Rourke’s crashed on the night of his 26th birthday. He listed his occupation as salesman. (He had just moved back to El Paso from New York and was starting an Internet service company.)

In his DWI interview, O’Rourke said he last ate at 7 p.m. — pasta — and consumed two beers. He also mentioned that he had a cold.

The incident was observed by a witness. He told Carrera that O’Rourke, driving a Volvo, passed him at high speed through a 70 mph zone and then lost control and “struck a truck traveling the same direction.” O’Rourke’s car then crossed the large grassy center median and came to a stop. (This video depicts Interstate 10 near the location of the crash.)

“The defendant/driver then attempted to leave the scene,” Carrera reported. “The reporter then turned on his overhead lights to warn oncoming traffic and try to get the defendant to stop.”

Similar information appears in another document, the incident and crime report: “The driver attempted to leave the accident but was stopped by the reporter.”

There are some inconsistencies in the police records — O’Rourke’s Volvo is described as both black and green, and he’s traveling either west or east — but the witness to the crash is twice described as saying O’Rourke tried to leave the scene of the crash. The witness is not identified. We could not locate Carrera for further comment.

The charges were dismissed after O’Rourke completed a court-approved diversion program, the Chronicle said. His father had been El Paso County Judge, an elected position, from 1982-1986 and was running for the position again in 1998 after switching parties from Democrat to Republican. (He lost.) There is no indication his father’s political prominence played a role in the outcome of the case.

At The Fact Checker, we place a high value on contemporaneous records. The police reports show not only that O’Rourke was highly intoxicated but that a witness to the crash said he tried to leave the scene.

O’Rourke was so drunk that he could barely get out of the car without falling, so perhaps he would not have gotten far — or he was simply confused. Perhaps in his memory, O’Rourke believes he did not try to leave. But, given his blood alcohol content at the time of the crash, O’Rourke’s memory 20 years after the fact is not nearly as credible as the police reports written just hours after the crash.

O’Rourke could have dodged the question during the debate or he could have said his memory of the night is not clear. Instead, he chose to dispute the factual record. We also believe in second chances, and O’Rourke should revise his answer if given another opportunity. In the meantime, he earns Four Pinocchios.

O’Rourke’s backers are screaming about the four-Pinocchio rating, noting that he wasn’t charged with leaving the scene. Except anybody knows that if you’re the son of a judge you don’t get charged for everything they could get you on – that’s how it works. The fact he’s attempting to dodge responsibility for his actions, when at this point it doesn’t matter and the value proposition he’s offering is that he’s not the same guy he was when he was 26, makes this a colossal gaffe.

Like the Post said, the easy and correct answer is to disavow the entire incident and to say it was a humiliating and disgraceful mistake which stands as the lowlight of his life, and that all he can do is learn from it – and on the question of leaving the scene the proper way to address it is to say he can’t remember with any specificity exactly what he was thinking or doing that night, so it’s pointless to contest the police report now.

To bog yourself down in a lie even the left-wing Washington Post can’t abide? Over something that wouldn’t make you look good in the best of all possible lights? Why on earth would he do that?

Cruz, for his part, didn’t try to take advantage of O’Rourke’s statement. There’s a time-honored maxim that during a debate when your opponent is stabbing himself in the throat you do nothing – and Cruz kept to that strategy. Which is why all everybody is talking about now is how O’Rourke hurt himself badly in that debate performance.