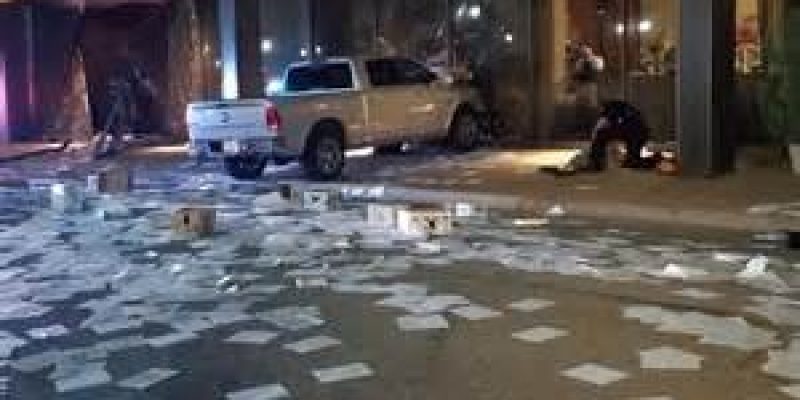 Wednesday morning saw a vehicular attack on a conservative news station, when a man drove his truck into the Dallas Fox affiliate KDFW studio. This comes in the wake of the left cultural and political figures stoking rebellion amongst their followers against the establishment and conservative outlets. The car ramming took place just two days after Chuck Todd published an article that attacked Fox News and suggesting it is time to “start fighting back.”

The culprit was arrested shortly after the incident, with his truck smashed up against “the side of the FOX4 building in downtown Dallas,” PJ Media reports. Before he was apprehended, his actions following the crash showed that the event was no accident. He got out of his car and began ranting about “high treason,” clearly motivated to target this specific location. While, “personnel were inside the building at the time, no one from the station was injured.”

This is just the latest outburst against the administration or anyone that may be seen as affiliated with conservative politics. As progressive figures and news outlets continue to heat up their rhetoric against the right, it is little surprise that such drastic actions are beginning to take place. Todd Chuck’s latest attack on Fox News is not new, but took place just two days before the truck ramming.

In the very title of his Fox News hit piece, Chuck suggests it is time for his colleagues to “start fighting back.” Chuck accuses the sitting President with surrounding himself, “with aides who argue for ‘alternative facts,’ and announce that ‘truth isn’t truth.’” He rips into the integrity of the administration, suggesting that the President is a source of ceaseless falsehoods and lies to the American people.

Chuck digs a little deeper than the current administration though, and infers that Trump is just the latest effect of a decades long attack on honest journalism. According to Chuck, Fox News is the epitome of a half century log targeting of corporate media. Chuck concludes that, “Fox intended to build its brand…by making the public hate the other choice more.”

Routine readers who are caught within this web of thought are understandably prone to fostering some distaste and possibly even animosity towards Fox News. If these viewers believe that this segment of the nation is as vile and full of hate as is suggested, there are bound to emerge some willing to act against what they perceive to be evil forces.

There is no direct link between Chuck’s article and call to action with the latest attack on KDFW studio. However, as more of this kind of material gets published and the overall message persists, this kind of aggression may only become the norm.

Interested in more news from Texas? We've got you covered! See More Texas News
Previous Article Beto Is The No. 1 Democratic Fundraiser In The Country
Next Article BREAKING: Dallas Cop Who Killed A Man In His Apartment Has Been Charged With Manslaughter