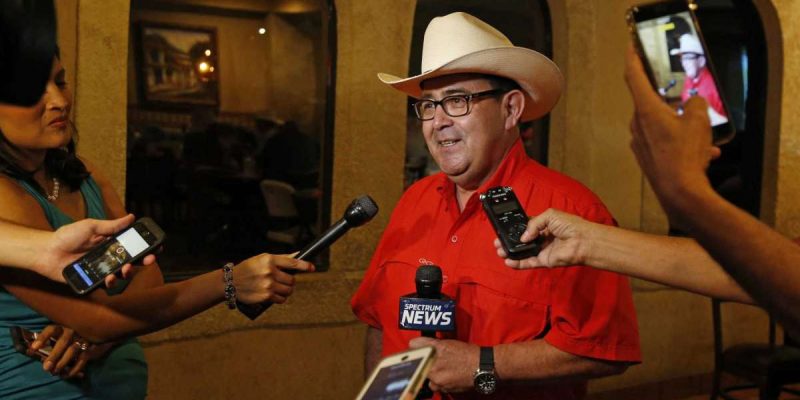 Coming on the heels of a Quinnipiac poll showing a widening U.S. Senate race between Republican incumbent Ted Cruz and Democrat challenger Beto O’Rourke, another Texas development Tuesday pushed a knife into the narrative of a burgeoning Democrat surge in this fall’s midterm elections.

The race in question is a special election for the vacant District 19 state senate seat, which came open in June when Carlos Uresti, the Democrat holder of the seat, was convicted on 11 felony counts including money laundering and fraud and sentenced to 12 years in prison. Uresti was involved in an oilfield services company which was essentially a Ponzi scheme set up to defraud investors.

And the seat, which hadn’t been in Republican hands since Reconstruction, went Republican Tuesday, in a race which wasn’t particularly close.

Voters elected political newcomer Pete Flores to the Texas Senate on Tuesday, flipping a Democratic district red for the first time in 139 years and bolstering Republicans’ supermajority in the chamber ahead of the November elections.

“We conservatives are conservative in the way we make approaches. The gunfight’s not over until the last shot’s fired,” Flores told the Express-News after Gallego conceded in a phone call just before 9 p.m. “The last shot’s been fired.”

According the Secretary of State’s website, Flores won with 53 percent of the vote to Gallego’s 47 percent with 44,487 ballots cast.

Flores and Gallego competed in Tuesday’s runoff after emerging from an eight-candidate field in first- and second-place, respectively, in July’s special election to replace former Sen. Carlos Uresti. The longtime lawmaker vacated his seat in June after being convicted of 11 felony charges.

Flores’ victory wasn’t supposed to happen, and its victims were left dazed and confused.

Christian Archer, Gallego’s campaign strategist, said he was shocked by the results, adding that they weren’t able to generate as much excitement as the Republicans.

“I don’t have any regrets, but I have a lot of disappointment,” Archer said.

Flores’ win marked an incredible upset in a district that political observers said shouldn’t have been competitive for Republicans. Low turnout in special elections and high-level GOP interests in preserving a Senate supermajority helped push Flores across the line, they said.

“It will provide a completely unexpected gift for Republicans for the next legislative session,” said Mark Jones, a professor of political science at Rice University.

Wait – Republican voters were more engaged and excited than Democrats?

Yes, you can say that Uresti’s conviction was a decisive factor in the differing levels of engagement, but when you consider the implication of District 19 flipping to red that isn’t an explanation…

Jones said Flores’ victory all but assured a Republican supermajority next year, which would allow Senate Republicans to bring bills to the floor without any Democratic support

“Tonight, I doubt anyone other than Pete Flores is happier than Lt. Gov. Dan Patrick,” Jones said.

Patrick, who spent around $175,000 on Flores’ campaign, said the supermajority was secured Tuesday night.

“This guy gives us a two-thirds majority,” he said.

A Republican Senate supermajority has policy implications Democrats obviously won’t like, though the Texas House isn’t quite as conservative as the Senate is.

With Flores’ victory, over a former congressman, no less, in a Senate district the map of which contains much of the U.S. House district in which Republican Will Hurd is locked in a tough re-election battle, it’s a major development casting a doubtful light on the narrative of a Blue Wave building in Texas this fall. The fact is Texas isn’t looking blue at all, but instead appears to be an area of GOP strength this year.