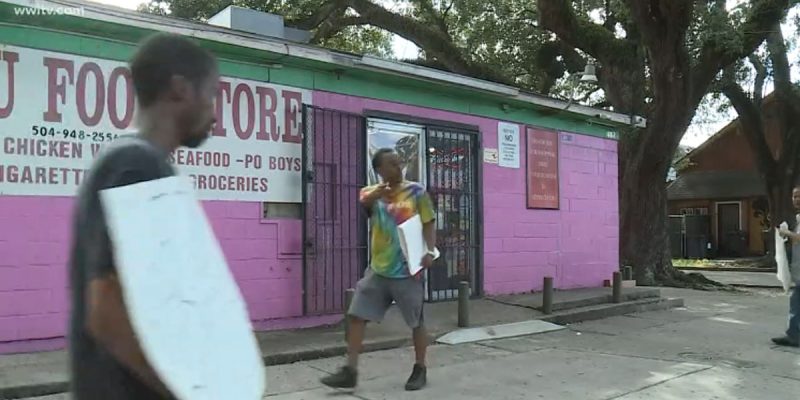 Two stories out of New Orleans yesterday highlight the reason why bad neighborhoods in urban areas end up as “food deserts” and half-empty strip malls populated by bail bondsmen and payday lenders.

First, here’s a story from WDSU-TV about a beauty store in the Lower 9th Ward which got hit by a couple of thugs who made off with a sizable chunk of its inventory…

New Orleans police are looking for two suspects accused of stealing thousands of dollars in merchandise from a beauty store in the Lower 9th Ward.

Police said the theft happened at Aby African Hair Braiding and Beauty store in the 6300 block of St. Claude Avenue.

Police said a total of 50 wigs were taken. Police released video from last Sunday at around 4 a.m., showing the suspects.

In the video, two suspects are seen entering the business.

Khady Thiam, the owner of the store, said they got in by breaking the window.

The two suspects are seen with their faces covered, going in and out of the store, taking wigs and boxes.

“Can you bring it back please, because it is really hard for me I always try to make it,” Thiam said. “It is very hard for me. I am not from here I just tried to come here to make some money to take care of my business and my family.”

What stands out in both of these stories? Well, first you’ll notice that the business owners in both cases are immigrants – the beauty store folks are from West Africa and the Manuch Food Store people are Chinese. And their reception in the neighborhood is to be victims of theft. In the case of the food store, their efforts at protecting themselves – namely, enlisting a friendly member of the community against a thief – have earned them protests.

Neither of these stories are at all uncommon. Frankly, it’s a bit of a surprise that either one made the news. And what’s the effect of this kind of tale playing out again and again in those neighborhoods?

Nothing, that’s what. Eventually, those business owners give up and move away, if they can. Certainly their kids, who more often than not are the hardest-working students at their schools, will go on to college and get jobs having nothing to do with the family business. And when the store owners pick up and leave, or go out of business after being victims of one crime too many, then that’s it. The building sits vacant.

You’ll hear a ton about “community investment” from urban Democrats, and that’s rhetoric aimed at convincing people in bad urban neighborhoods that some politician is going to make sure their slum will soon be overflowing with commercial activity thanks to government dollars. But that’s a fantasy; everybody knows sooner or later those government dollars will dry up and any business which accepts them to move into a blighted neighborhood will eventually have to rely on the support of the community.

And the same people who created the blight in the first place are hardly going to keep the “community-invested” businesses going with their patronage and support. Instead you have shoplifting, burglary and stabbings in the parking lot, which will drive a business away in no time flat.

The issue here is behavior, and culture. It takes a community of people willing to work together in following some basic rules on how to act in public in order to have a neighborhood with thriving businesses. As in, don’t steal. Don’t leave trash on other people’s property. Don’t fight in public. Don’t use foul or abusive language in someone’s place of business. Be polite.

Some people in the Seventh or Lower Ninth Wards get that, and they’re obviously not the problem. But not enough do. And that’s why nobody wants to do business there.