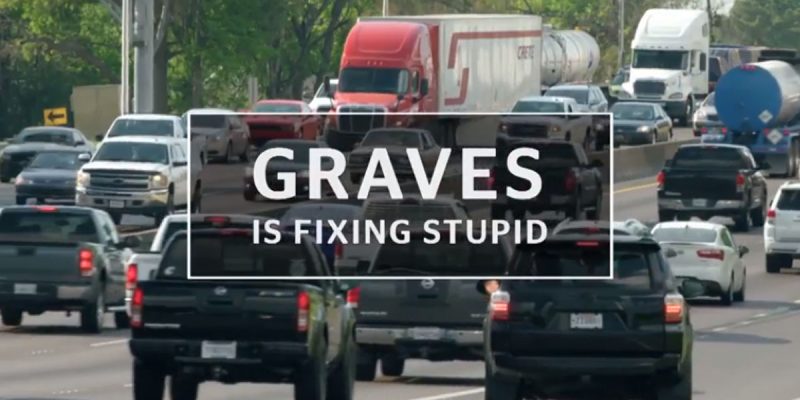 In case you’ve missed the ad incumbent Republican congressman Garret Graves, who represents Louisiana’s 6th congressional district covering most of the Baton Rouge area and picking up much of south central Louisiana, is now running on the local airwaves, here’s a video clip of the ad…

“Fixing Stupid” is one of the all-time great electoral tag lines and we’ve got to give Graves credit for that one. It’s almost unfortunate that Graves is the one using it since he’s going to coast to re-election and some other House Republican who’s in a tougher fight might need it more.

But the ad in question, where Graves touts the fact that he managed to secure some federal funding to do something about the unconscionably ridiculous I-10/110 split coming into Baton Rouge from the “new” bridge, where as he notes the Capitol City has the distinction of being the only place where an interstate highway is restricted to just one lane of traffic, has the state’s Department of Transportation and Development reaching for the Pepto Bismol.

Shawn Wilson, secretary for the state Department of Transportation and Development, said Friday he was surprised, to put it mildly, when he saw the ad with Graves standing on I-10.

Wilson noted that it is illegal for pedestrians to be on the interstate.

“I would hope he would not do that,” the DOTD chief said of Graves. “I would say officially my hope is others don’t try it.”

Wilson also said he conveyed his views to the congressman.

When the ad was done and how long it took for camera crews and others is unclear.

The spot was reportedly filmed during the height of afternoon rush hour to help make a point.

Graves appears to be standing near speed bumps that separate I-10 from the exit lane.

The exit is notorious for being the source of daily traffic jams.

The two lanes of eastbound traffic leaving the Mississippi River bridge regularly includes cars and trucks whose drivers suddenly find themselves headed to Washington Street unless they can quickly wedge their way into the adjacent eastbound lane.

The retort to Wilson, to the extent one is needed, is that hey – the thing was shot in the middle of afternoon rush hour traffic on I-10 there, and that traffic usually moves so slowly there’s little danger of getting hit by a car.

Besides, this isn’t the first time Graves decided to shoot video on Louisiana’s highways. There was his publicity stunt on the almost-abandoned Audubon Bridge south of St. Francisville a couple of years ago, in which he used Louisiana’s Bridge (From Nowhere) To Nowhere to illustrate how dysfunctional and useless Louisiana’s infrastructure program is. That ruffled some feathers at DOTD, as did Graves’ contention that only 11 percent of the money given to the agency actually gets spent on roads – a contention which was never effectively rebutted, by the way.

That said, DOTD didn’t have anything else to complain about where Graves’ current TV spot is concerned. For one thing, they didn’t do well when they challenged him previously. And for another, thanks to Graves’ work in DC they’ve got federal money to do some highway projects they wouldn’t otherwise have – so while Wilson and his boss Gov. John Bel Edwards are Democrats who might fantasize about Justin DeWitt or Andie Saizan pulling an upset and turning the seat blue, they’re not going to do anything to irritate the Congressman in the knowledge he’s probably going to be in his seat longer than they’ll be in theirs.

You don’t pull on Superman’s cape.

On a slightly different topic but still involving DOTD, we’re hearing two things – first, there will be yet another run made at a gas tax increase in next year’s legislative session, and the people backing it actually believe they’re going to get a two-thirds vote in both houses in an election year, which is patently insane. Perhaps less insane, if only slightly less so, is those same folks are saying that if the gas tax hike doesn’t pass next year it’ll definitely pass when Edwards is re-elected and calls a special session in January 2020 to pass it.

Keep this in mind, because by this time next year John Bel Edwards will be swearing up and down that he’s not going to raise your taxes. Hell, he swore up and down in 2015 he wouldn’t need to raise taxes and he’s inflicted billions of dollars in tax hikes on the people of this state. There’s little question about his lack of credibility on this question; at issue is the coming denial of something that is already being planned behind the scenes.

Of course, there’s an easy way to avoid such unpleasantness, which is not to re-elect Edwards next year.

Interested in more national news? We've got you covered! See More National News
Previous Article Hilarious: all of the Fauxahontas memes
Next Article VIDEO: Who Is Ralph Abraham? Well, He’s Here To Tell You