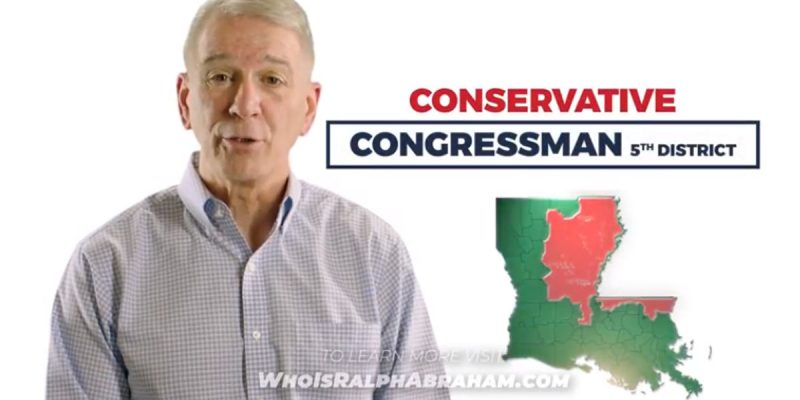 By now it’s common knowledge among our readers that Rep. Ralph Abraham, who like the rest of Louisiana’s congressional delegation is running for re-election with no particular threat of losing his race – Abraham faces a Democrat, a Libertarian and an Independent who between them haven’t raised more than $12,000 or so as of the September 30 campaign finance reports – is thinking about running for governor in 2019. We reported as much quite some time ago, and nothing much has changed other than Eddie Rispone has gotten in and the indications are that Sen. John Kennedy – who has long been rumored as a likely for the race – will join him.

Abraham’s chances of winning that race next year, should he enter it, will hinge on people outside of his mostly-rural congressional district getting to know him. He’s got very little name ID outside of his district – in September, when the Hayride/Remington Research poll was released, it showed Abraham with a statewide approval rating of 17 percent, with 19 percent disapproval and a whopping 64 percent expressing no opinion. What that means is outside of Abraham’s district nobody knows who the heck he is.

That’s why Abraham is only catching 8 percent in a four-way governor’s race matchup with John Bel Edwards, Kennedy and Rispone, and why he’s down 48-35 in a head-to-head ballot with Edwards. Nobody knows him. In his district, where they actually do know him, he’s 53 percent favorable against just 19 percent unfavorable (undecideds are 28 in LA-05; they’re at least 63 percent everywhere else).

So here he is running all but unopposed for re-election, and the $400,000 or so he’s got in the bank is federal money he can’t use in a state race next year if he wants to run for governor, and he’s got this problem of name recognition. What to do?

Well, the first obvious thing is to cut a spot like this. It’s a 60-second ad, which is still TV-capable but a bit longer than the usual 30-second ad most candidates will purchase (and therefore a bit more expensive than those :30 spots to buy airtime for), and it seeks to answer the “Who is Ralph Abraham?” question with a host of items that make him out to be a quite attractive candidate indeed…

And the second obvious thing is to take advantage of Abraham’s congressional district’s otherwise-disadvantageous geography. You see, for the most part Abraham’s district covers the parts of the state nobody else has been to or cares about; it’s the northern reaches of the Florida Parishes, it’s the Mississippi Delta, it’s the central part of the state and it’s North Louisiana not including Shreveport. We could say that Olla, Red Fish, Acme, Jigger, Saranac, Logtown, Mudville and Urania are all in Abraham’s district and your likely response would be “Ummm, what?”

You wouldn’t be wrong in that response.

But the one advantage that district does have is that along with Crowville, Mer Rouge and Tallulah, the district also includes St. Francisville, which means Abraham can justify buying TV time in the Baton Rouge market, and it includes Bogalusa and Franklinton which are in the outside fringes of the New Orleans TV market as well.

So look for that ad in both Baton Rouge and New Orleans over the next couple of weeks in advance of the Nov. 6 election as Abraham seeks to eliminate the “Who is Ralph Abraham?” problem.