The economy is booming. No matter what metric is examined, the U.S. economy is better off today than it was two years ago. Still, the housing crisis and a near decade of economic stagnation left a stain on the minds of Americans. While records are being broken in other regards, economic optimism has lagged behind seemingly due to the long lasting impression of where America just came from. Even so, optimism is finally starting to catch up, and Americans are clearing cobwebs of a stale economy. Economic optimism has now reached a near two decade high.

The severity of the 2008 depression understandably has made Americans reserved in their outlook. However, this is gradually being cracked, and hope is taking hold of the nation. Past concerns can only so long hold off an awakening to where the nation has come in just two short years. This is especially the case for those millions of Americans now gainfully employed who once felt forgotten. 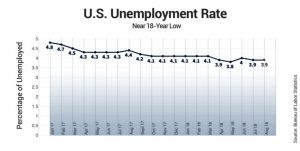 The unemployment rate has dropped so low that is difficult to conceive of it dropping any lower. With so many people employed, the labor supply is now restricted. Employers are thus having to compete with one another for workers, and thus offering more enticing incentives, including higher wages. 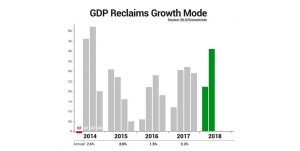 GDP growth is on the rise. Every since Trump got through a rough 1st quarter in office, the growth rate has been respectable. Now that legislation and deregulation has had time to kick in, GDP growth could just be getting started. This last quarter hit a four year high at 4.2 percent. There is reason to speculate that the third quarter of 2018 could see an even higher growth rate.

Americans are still having to breath in this new economic reality. With every breath, more and more citizens are realizing just how rich is the air. Economic optimism is near a two decade high today. However, this could likely be like every other metric, in which optimism has just begun to rise.

Interested in more national news? We've got you covered! See More National News
Previous Article Pope Francis Approval Rating Among U.S. Adults Is In A Free Fall
Next Article BAYHAM: When Is “Enough” Enough Of The Brett Kavanaugh Smears?