Two months ago we covered Rispone’s initial foray into the 2019 gubernatorial election, not completely sure how serious he was about running.

We’re a little surer now. The paperwork is in, and the founder and CEO of ISC Constructors is going to run. 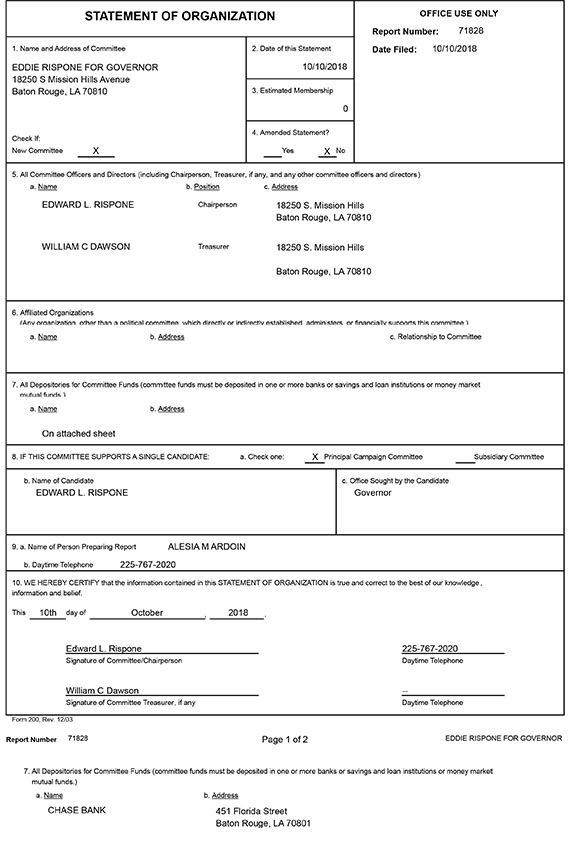 Rispone told us he’s dropping $5 million of his own money into the campaign and he’ll be trying to match that through regular fundraising, which if he met that goal would put him in a competitive position with the $10-12 million John Bel Edwards will have to spend as the incumbent next year. And he’s hired some high-profile consultants – among them Blake Harris, who is currently handling the Bill Lee campaign for governor of Tennessee which could very well be a template for what Rispone will want his race to look like…

My first ad for the General Election is on the air today. I’ve never run for office before and it’s an interesting experience. You learn some things, like politics isn’t the solution, it’s generally the problem. People are the solution. pic.twitter.com/lZysIdHkOt

Rispone is a lot like Lee, who currently holds a sizable 13 point lead over Democrat Kevin Dean according to the RealClear Politics polling average. Both are first-time candidates who come to their respective races as successful businessmen from Christian perspectives with conservative bona fides but not especially doctrinaire ideological messages. So far that’s been a great fit for Lee in Tennessee, who seems poised for a huge win on Nov. 6. Rispone’s prospects are quite a bit more uncertain, for a number of reasons – perhaps most prominently the fact Louisiana’s politics aren’t much like Tennessee’s other than both are generally red states which will occasionally elect a Democrat to statewide office.

Most notably, here there’s a jungle primary while Tennessee has a more traditional party primary system. That could be significant; Lee caught an opponent in the Tennessee GOP primary, Rep. Dianne Black, who was considerably better known and had been a figure on that state’s political scene for quite some time, and survived a rather brutal internecine fight in order to win. In Rispone’s case it would be perhaps an even higher mountain to climb; he’s likely going to be up against a senator in John Kennedy even better known in Louisiana than Black was in Tennessee, and he won’t be able to focus on mobilizing hard-core Republican voters not married to Kennedy in a smaller primary electorate.

Plus, an additional headwind might come from the sentiment within the Louisiana GOP that multiple candidates beating each other up is the reason the party lost the governor’s mansion in 2015 and to repeat that process next year is a mistake. If Kennedy does get in, Rispone will have to fight that perception.

But there’s lots of time for all of that to play out, and nobody quite knows yet what the field will look like. Rispone could be one of many Republican candidates against Edwards, or he could be one of only two. What we do know is he should be taken seriously with the resources he has available, and also given Louisiana’s history of gubernatorial elections. It’s a fact that in competitive gubernatorial races throughout recent history, more often than not it’s an underdog (Dave Treen, Buddy Roemer, Mike Foster, Kathleen Blanco, John Bel Edwards) who wins.

Interested in more national news? We've got you covered! See More National News
Previous Article Senate Votes Today On Major Corps Of Engineers Reform Bill, Could Result In Major Louisiana Activity
Next Article It Looks Like The GOP Is Out Of Danger In The Texas And Tennessee Senate Races