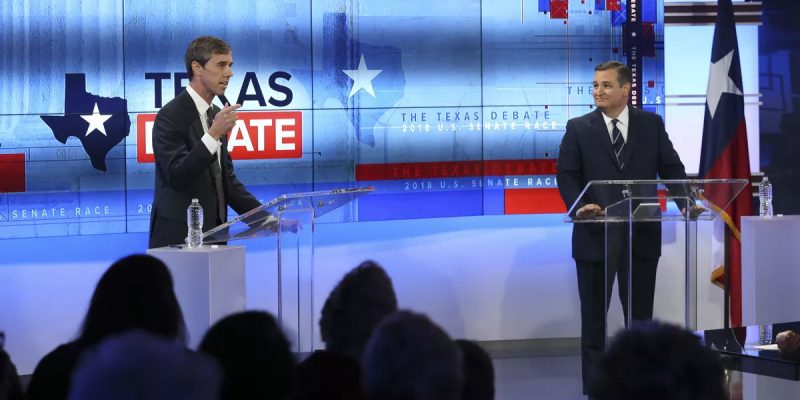 When the Democrat partisans at Slate concede defeat for Beto against Cruz, then you know defeat it is…

Rep. Beto O’Rourke made it about 13 minutes into the debate before he attempted to throw the aggressive punch at Sen. Ted Cruz that he’d been expected to throw.

“Sen. Cruz is not going to be honest with you,” O’Rourke said, after Cruz suggested that the El Paso congressman’s concern over climate change was really a plot to seize “the power to control the economy.”

“He’s going to make up positions and votes that I never held or have never taken,” O’Rourke said. “He’s dishonest. It’s why the president called him Lyin’ Ted, and it’s why the nickname stuck. Because it’s true.”

Cruz laughed as O’Rourke said this. He laughed at just about every attack from O’Rourke all night, probably because he was ready for them. Just as O’Rourke had planned to call Cruz “Lyin’ Ted,” Cruz had a planned his response.

“It’s clear Congressman O’Rourke’s pollsters have told him to come out on the attack,” Cruz said, in response to a question about whether Exxon-Mobil was correct in its view that policymakers should address the issue of climate change. “So if he wants to insult me and call me a liar, that’s fine. But as John Adams famously said, facts are stubborn things.” Returning to the facts, Cruz expanded on his view that “of course the climate is changing” as it has been “since the dawn of time.”

Ted Cruz “won” the debate, the second and final of the much-watched campaign that was never all that close. Cruz won in the sense that O’Rourke needed to use the debate to change the trajectory of the race, and he couldn’t. O’Rourke always starts at a handicap: He is running as a liberal Democrat in Texas, which, despite oft-repeated rumors of turning blue, remains a blood-red state. All Cruz has to do is use combinations of “radical,” “liberal,” “socialist,” “illegal immigrant,” and “extremist,” over and over, and leave O’Rourke to negotiate the proper way to address direct questions about securing the borders or paying for Medicare for All. (On the former, it means talking about his work on enhancing data collection at ports of entry; on the latter, suggesting that he’ll settle for a Medicare buy-in on the insurance exchanges instead of going for the straight stuff.)

President Trump agreed with Slate. On Twitter, he said “Watched the debate last night & Beto O’Rourke, who wants higher taxes and far more regulations, is not in the same league with Ted Cruz & what the great people of Texas stand for & want. Ted is strong on Crime, Border & 2nd A, loves our Military, Vets, Low Taxes. Beto is a Flake!”

O’Rourke kept trying to cast Cruz as a liar, but the Senator’s bruising presidential primary campaign against Trump left him prepared for such attacks. Cruz just laughed at O’Rourke, and then talked about his voluminous record as a garden-variety leftist in Congress and on the El Paso city council.

Behind in the polls anywhere from five to 10 points (CNN now has it 52-45 for Cruz), and very likely to lose in a margin on the larger side of that range despite raising more money than any Senate candidate in American history (more than $60 million has been poured into O’Rourke’s campaign, most of it from outside Texas and some even from outside the country), O’Rourke’s campaign is taking on the look of a sinking ship with the bow rising in the air. Last night’s debate was probably his last real opportunity to shake loose votes which have been coming home to Cruz, and he failed, miserably, to score any significant blows on the incumbent.

With just less than three weeks to go in the race, O’Rourke’s real problem will be to fight off despondency among his supporters and to keep his loss from wiping out more competitive Democrats in down-ballot races as Democrat turnout wanes. Texas could well be a Waterloo for the Democrats after all that money has been spent.


Interested in more news from Texas? We've got you covered! See More Texas News
Previous Article This is what Malcolm X had to say about Negroes and Democrats [audio]
Next Article Now Elizabeth Warren is not only Native American– she’s a French plagiarist!