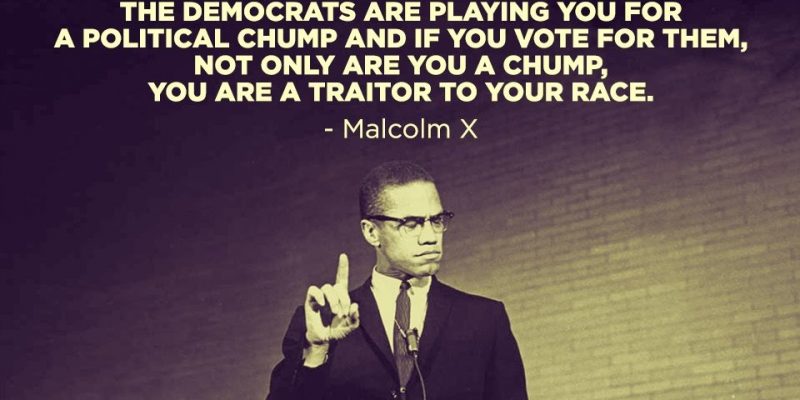 For bigots and willful ignorants like Don Lemon, it might be helpful to hear what Malcolm X had to say about Negroes and the Democratic Party.

When blacks gave 80 percent of their vote to the Democratic Party in 1964, black leader Malcolm X called them “political chumps.”

He said that white voters “are so evenly divided that every time they vote, the race is so close they have to go back and count the votes all over again. Which means that any bloc, any minority that has a bloc that sticks together is in a strategic position. Either way you go, that’s who gets it.”

Democrats didn’t keep the promises they made to blacks, yet still thought they could depend on the black vote in the next election. Malcolm X said this was wrong, and stupid.

“You put them first,” said Malcolm X, “and they put you last. ‘Cause you’re a chump. A political chump! … Any time you throw your weight behind a political party that controls two-thirds of the government, and that party can’t keep the promise that it made to you during election time, and you are dumb enough to walk around continuing to identify yourself with that party — you’re not only a chump but you’re a traitor to your race.”

Since we talking about “negroes” this week, let’s see what Malcolm had to say about negroes and Democrats in the country… pic.twitter.com/3xuQ404a56

What would Malcolm X say about today’s 95 percent black vote?