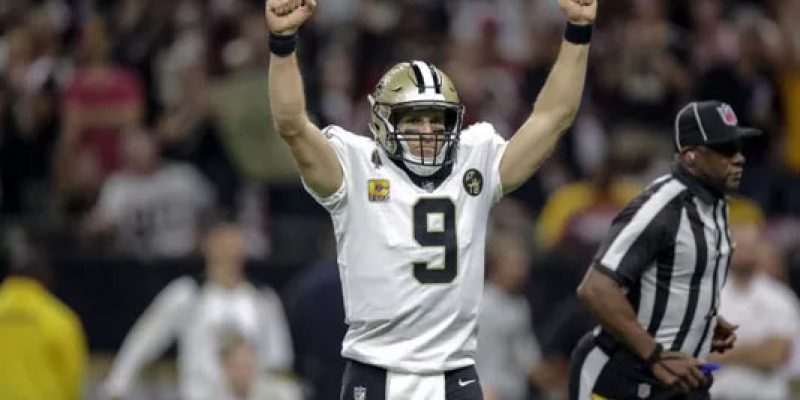 And this was less of a problem than people thought it would be, because Brees wiped out Manning’s record just before halftime tonight…

You can’t beat that for how to break such a significant record. And after Brees broke it, he matriculated to the Saints sideline where his three young sons were and was caught saying…

“You can accomplish anything in life if you’re willing to work for it. I love you boys.”

Nothing is more inspiring, or more American, than that.

Drew Brees might be the most American male in existence today. The level of excellence and class with which he’s operated is unmatched in pro sports and he’s playing at a level no other NFL quarterback can match so far. Brees actually completed 26 of 29 passes – 89.7 percent – for 363 yards, three touchdowns and no interceptions. If it’s possible to have a better game as a quarterback against an NFL defense we’ve not seen it; this was the apex of a quarterback dissecting a pro defense, and Brees did it with ease.

Can this be replicated? Well, Brees’ favorite target was rookie wide receiver Tre’Quan Smith, who had 111 yards and two touchdowns on three catches – a breakout game which dwarfed the one catch for 18 yards he’d posted in the first four games of the season. If Smith is going to emerge as a deep threat to go with Ted Ginn, Jr., who held that role in the Saints’ first four games before missing the Redskins game with an injury, New Orleans’ passing game is frighteningly diverse.

Add to that the debut of running back Mark Ingram, who missed the first four games of the season with an NFL suspension for testing positive for performance-enhancing drugs. Ingram was a somewhat pedestrian 16-for-53 rushing, but he scored two touchdowns and caught a couple of passes for 20 yards – a solid debut. With Ingram and Alvin Kamara, not to mention wildcat QB and H-Back Tayson Hill the Saints have the most dangerous backfield in the NFL, and with Smith coming on as a receiver to go with one of the league’s most productive pass catchers in Michael Thomas, Ginn, Smith and Cameron Meredith, as well as Josh Hill and Ben Watson at tight end there is nobody in the NFL offering more quality skill position options than the Saints have.

But it’s not just that offense, which rolled up 447 yards on 61 offensive snaps tonight. The Saints’ defense, despite losing all-pro cornerback Marshon Lattimore to what looked like a concussion early in the game, held Washington to 2843 yards on 57 offensive plays – a dominating performance indicating the unit has begun to come into its own after struggling in the first part of the season.

But it was Brees’ night, and a showing which indicates that the Saints could be in position – if the defense can hold up – to run through a tough schedule into a strong playoff position and perhaps the franchise’s second Super Bowl appearance. Going 3-1 without Ingram was an excellent sign, but the big performance under the Monday Night lights against Washington is even better.

UPDATE: Here’s Brees in the postgame press conference, explaining one of the greatest moments in NFL history…