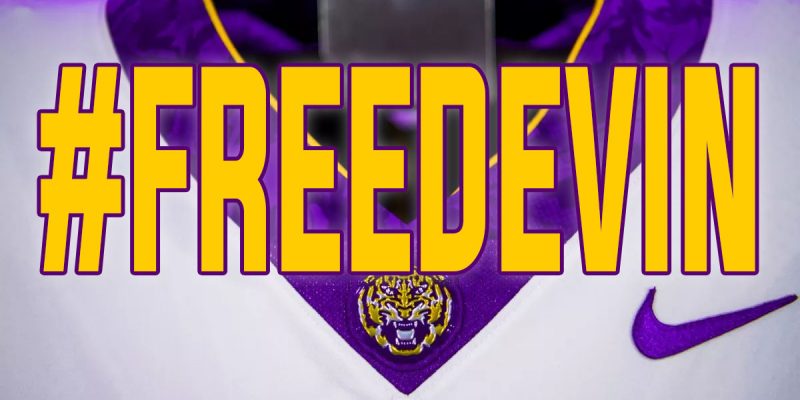 Seems like nobody cares about anything other than the latest example o’ The Man keepin’ a brotha down. Y’all know what I’m talkin’ about – that outrage that happened in the fourth quarter Saturday night. #FreeDevin, dammit.

By now everybody done seen that hit Devin White put on Mississippi State’s Nick Fitzgerald as he threw another one of his famous interceptions (there were four of them officially, but this one got called back). White hit him in the chest, he led with his hands shovin’ the dude, and more or less grazed his facemask with his helmet as Fitztragic kinda crouched down after throwin’ the ball.

And the refs went discobiscuits. Not only rang White up for targeting but then called not one but TWO unsportsmanlike conduct penalties on Kristian Fulton and John Battle for a lil’ celebration they had after Fulton picked off Fitzragarm’s pass and ran it damn near into the end zone.

Two unsportsmanlike conduct penalties for the same action. All told they gave LSU 45 yards in penalties instead of an interception and the ball deep in the red zone. Damnedest thing you ever saw. LSU’s defense responded to that by pickin’ off Fitzgerald yet again, as if out of pure spite.

But the damage was done, because with that targeting call White has to, by rule, miss the first half of the Alabama game in two weeks.

So here’s the hit one more time.

And another really good angle…

My handheld angle of the #DevinWhite hit from the Videoboard. My feeling is #LSU shouldn't lose #40 for this tackle. Not a malicious hit. Your thoughts? pic.twitter.com/Fua0K5LHIn

After the hit, the referee showed up and chased Fitzgerald off the field, as though he was to hurt to play. Fitzgerald was lookin’ at him like “Whatcha mean, ref? I’m fine.”

It looked like a bullshit CYA move by the ref, tryin’ to sell that call as justified – oh, the kid’s hurt so that’s why we threw the flag.

Didn’t wash. The crowd wouldn’t stop booin’ the refs the rest of the game even though LSU cruised home to a 19-3 win. Everybody was that pissed off, because everybody knew the effect of that call.

We got Alabama in here in two weeks and the refs just took out our best defensive player for the first half on a weak-sauce targeting call. Like Gordy Rush said on the radio, three retired refs livin’ in Birmingham Freakin’ Alabama did the review and you’re not supposed to smell a rat.

Saw Alabama play Tennessee Saturday? They had the CBS game. And this happened…

That got called targeting on the field. And then the review crew in Birmingham said nah. That kid Thompson’s gonna play against LSU. He’s also got a felony indictment for aggravated assault hangin’ over his head and was supposed to have a court date earlier this month but the judge said nah, and postponed it for him. He’s gonna play in the LSU game.

Yeah. Not targeting. Led with his helmet and not his hands. And so on.

That kid Wilson who made that hit? He’s gonna play against LSU. The quarterback he hit got put out of the game with a collarbone injury. But Wilson’s gonna play.

Player safety, and all.

This is now a legitimate thing. In fact it’s such a legitimate thing that all the politicos in Louisiana are actually unified for once. It feels like right after 9/11 or something. So here was John Bells Edwards after that call on White…

Someone is going to have to explain the definition of “targeting” to me. From what I know, that wasn’t it. #GeauxTigers

As much as I try and forget 2016 for a number of reasons, today, a light bulb went off in my bald head. Let’s go back to 2016, after Hurricane Matthew moved the LSU-Florida football game and, more importantly, revealed the latest evidence of the Southeastern Conference’s love affair with Alabama.

As I said then, “Every LSU fan knows that the SEC has literally been in the tank for Alabama the whole time, and now add Florida to the list.”

If there was any doubt, the SEC crew in zebra stripes made it clear Saturday night. The league is in cahoots with the Crimson Tide. Yes, it appears there is collusion.

After the botched targeting call on LSU linebacker Devin White, the SEC is presented with a rare moment to atone for past sins and put to rest its prior affairs. It has an opportunity to take a stand for fairness and democracy.

These moments in history are fleeting.

I have to think back to June 12, 1987, when President Ronald Reagan stood in West Berlin and declared “tear down this wall” to find a similar moment in time of our history. (OK, I realize that LSU football is not as important as people living under tyranny — but it’s close.)

Rip up this suspension. It was a botched call, a botched review and could forever cement the SEC’s love affair with Alabama.

Commissioner Greg Sankey — I repeat, rip up this suspension. Don’t taint SEC football history with this skid mark of a decision.

We don’t need a recount. We don’t need an appeal. We need a old-fashioned showdown on Nov. 3 in Tiger Stadium between two of the country’s top teams.

In the name of all that is right, holy and just in this world, I beg SEC Commissioner Greg Sankey— tear this abomination of a decision down now.

Meanwhile here’s the guy who runs the Chamber of Commerce in Baton Rouge, agreein’…

All those movers & shakers even lit a fire under Joe Alleva’s butt, though his track record of gettin’ stuff done with the SEC is, well…

#LSU AD Joe Alleva contacted the league office immediately after the game Saturday in reference to the targeting call against Devin White. He has expressed his displeasure and is fighting against the ruling.

A reminder, there is no league appeals process for this.

So far, ain’t no response from the SEC. This was their initial thing they had to say…

Statement from the #SEC on Devin White’s targeting call. pic.twitter.com/UenqJ3Aqr6

Well, that’s as weak as the call was. The guess here is nobody in Louisiana’s gonna take it lyin’ down, seein’ as though people here are damn tired of Alabama and their BS anyway. It’s gonna be a fun two weeks, unless you work in the SEC office.