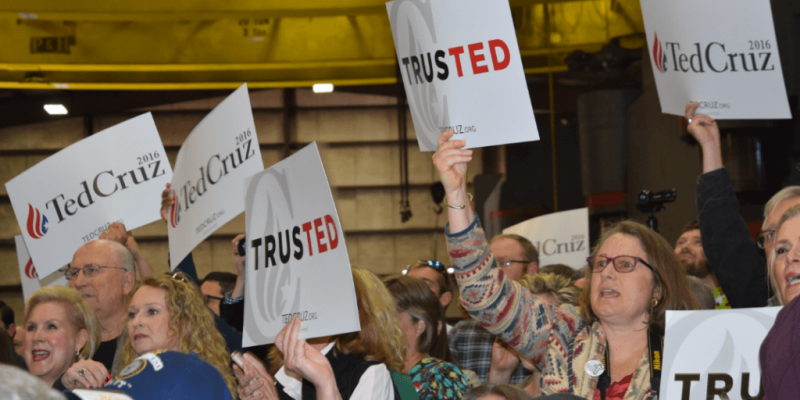 “I’m going to make a prediction to every person here: In 2020, Donald Trump will be overwhelmingly re-elected as president of the United States,” Cruz said. “I am honored that President Trump is here endorsing and supporting my campaign and I look forward to campaigning alongside him in 2020.”

Cruz went on to talk about tax cuts, border security, job creation, and his commitment to conservative principles.

Of Cruz, President Trump said, “You know we had our little difficulties. I tell you what, nobody has helped me more … than Senator Ted Cruz.”

He added, “About a month ago, they were talking about this ‘blue wave.’ We’re not hearing that anymore. The blue wave is being dissipated a little.”

Trump then went on to characterize Cruz’s opponent, who is trailing Cruz in the polls. He said:

“Ted’s opponent in this race is a stone-cold phony named Robert Francis O’Rourke, sometimes referred to as Beto. And he pretends to be a moderate, but he’s actually a radical open borders left-winger. O’Rourke voted against your tax cuts and he went against oil workers. … O’Rourke supports a socialist takeover of health care. You’re going to triple your taxes and it won’t be enough.”

Trump also mentioned O’Rourke’s “F” rating from the National Rifle Association, saying, “An F means he wants to take away your guns.”

Trump said of the Midterm Election:

“This will be the election of the caravan, Kavanaugh, tax cuts, law and order and common sense. The choice in November could not be more clear. Democrats produce mobs, Republicans produce jobs.”