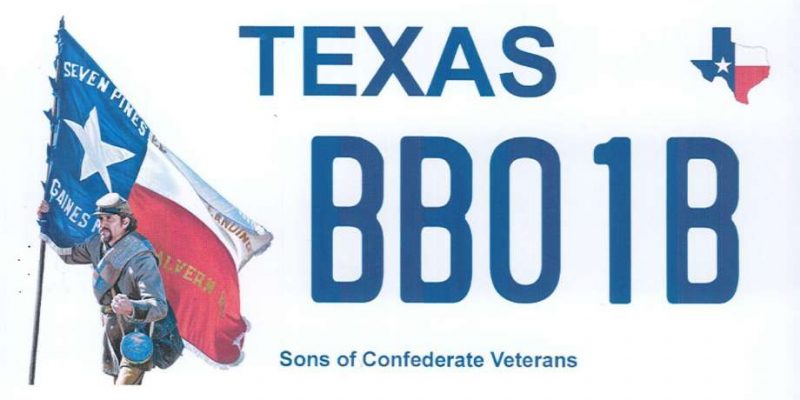 The Commissioner of Agriculture, Sid Miller, who is running for reelection, is backing a new speciality license plate that would help raise money for the Sons of Confederate Veterans, according to news reports, which depicts a Confederate soldier carrying a flag from the Texas regiment. The license plate design does not include the Confederate battle flag.

The license plate design was inspired by a painting created by Fort Worth historical artist John Paul “Jack” Strain. This painting, in particular, depicts a Confederate soldier from the 1st Texas Regiment carrying what became known as the Texas Wigfall Flag at the Battle of Antietam in Maryland in September 1862.

The Sons of Confederate Veterans has sought to establish a license plate since 2007. Its first design featured the Confederate battle flag and sparked criticism from people who said the plate was offensive and loaded with racial undertones. The state rejected that design in 2011, a decision the U.S. Supreme Court upheld in 2015. The court ruled that government agencies do not have to approve messages “with which they do not wish to be associated.”

The Sons of Confederate Veterans claims about 3,200 members in Texas in its March application for the specialty license plate. The group estimates about 1,000 such plates would be sold in the first year. Of the $30 fee collected for the specialty plates, $22 would go to the Department of Agriculture as the sponsoring agency. The department would give that money back to the Sons of Confederate Veterans in the form of grants “for supporting charitable causes and related activities,” Miller told the DMV in a letter.

Miller wrote a letter supporting the license plate, stating he “couldn’t see anything offensive about it.”

His opponent, Kim Olson, a retired lieutenant colonel, said, “This is not something I want to go to the mat for. I want to represent folks in agriculture,” Olson told the Chronicle. “We have bigger fish to fry.”

“The Confederate flag is one of the six flags that flew over the state,” Miller told the Morning News. “There’s no profit in hiding our history and trying to rewrite history.”

Olson’s campaign manager told told the Morning News, “Kids are hungry, farmers are struggling, rural communities are suffering, and this is his focus? Kim Olson is working to reach all voters, because the Texas Department of Agriculture must represent all Texans.”

Paul Gramling Jr., Commander in Chief of the Sons of Confederate Veterans, said he hopes the plate is approved, telling the Chronicle that the Supreme Court’s 2015 decision was based on “prejudices.”

The Texas Department of Agriculture has sponsored license plates for the American Quarter Horse Association, the Order of the Eastern Star,k and the Grand Lodge of Texas, the Chronicle reports.

According to The Sons of Confederate Veterans, their specialty license plates are in use in Louisiana, Tennessee and Alabama.