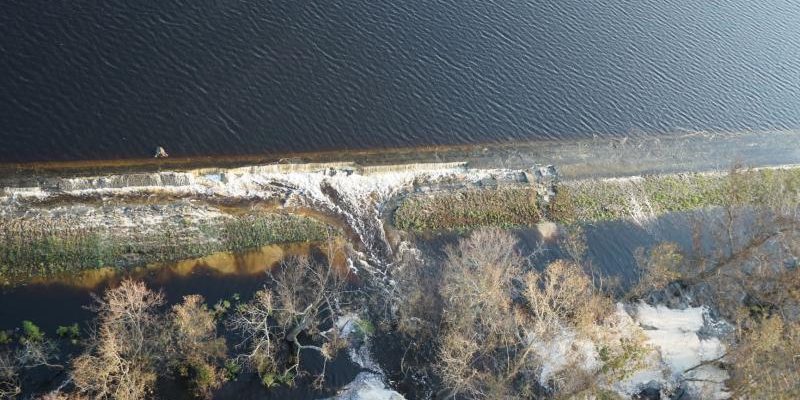 After a dam breach, coal ash is in North Carolina waters.

Duke Energy has said its water tests show they are within permitted standards for arsenic and other contaminants– but pictures and video of the pollution tell a different story.

Duke Energy said that floodwaters continued to spill over a dike at the north side of Sutton Lake, a 1,100-acre (445-hectare) reservoir at the L.V. Sutton Power Station. The water caused several breaches in the dam on the south end of the lake. Gray material, which Duke refers to as lightweight coal combustion byproducts, were recorded in the water.

And here’s a video. Photos and video courtesy of Donna Lisenby with the Waterkeeper Alliance who was on the river today pic.twitter.com/lS5uFFy2Yk

Coal ash is what’s left over after coal is burned to generate electricity. It includes mercury, lead, arsenic and other toxic heavy metals. The inundated basin contains at the plant 400,000 cubic yards (305,820 cubic meters) of ash, WUNC News reported.

Duke Energy has caused a number of environmental contamination incidents even after it retired a coal-fire plant in 2013 that used Sutton Lake as its coaling pond. A week prior to the dam breaking, there was a breach at a nearby coal ash landfill that spilled “enough material to fill 180 dump trucks.” WUNC reported.

In 2014, a Duke drainage pipe collapsed under a waste pit at an old plant in Eden, which caused a massive spill coating “70 miles (110 kilometers) of the Dan River in gray sludge.”

Three old coal-ash dumps capped with soil were underwater at a Goldsboro plant after the Neuse River flooded.

Waterkeepers Carolina, in its “Swimming upstream: the state of North Carolina’s Waters” report, states, “2016 was a year of vast devastation and increased pollution, from storms, the burgeoning hog and chicken industries, coal ash and other chemicals and abuses. Contributing to the problem were environmental officials who turned a blind eye to the problems and were slow to respond to issues. Combine this with State government that attempted to roll back protections.”

It points out that the Catawba River, upstream of Charlotte, is the “coal ash capital of North Carolina.”

Coal ash and drinking water “go hand-in-hand” from this river with “tens of millions of tons of this toxic industrial waste are stored in leaking, unlined pits held back only by leaking earthen dams along the banks of the lakes that supply the city’s water.”

It adds, “Duke Energy has 14 coal ash sites in North Carolina, and for years, monitoring wells at all 14 have revealed violations of state groundwater standards for metals associated with coal ash. For years, state regulators took no action. With Duke refusing to clean up its mess, Riverkeepers brought litigation to force clean up two years prior to the February 2014 Dan River coal ash spill.”

As a result, Duke Energy plead guilty to nine Clean Water Act violations and paid $102 million in fines and restitution for illegally discharging pollution from ash dumps at five North Carolina power plants. It plans to close all its ash dumps by 2029.

Yet the pollution continues, and Duke Energy has “fought coal ash cleanup at every turn,” Waterkeepers North Carolina maintains.