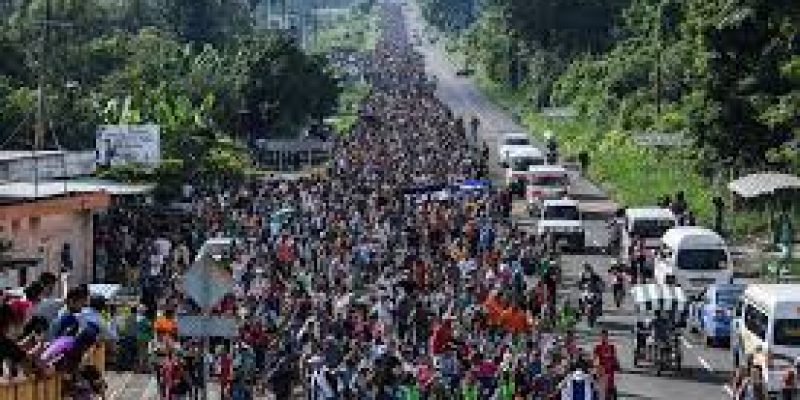 Migrants in the caravan heading towards the U.S. border have made their intentions quite plain. They are on a journey to cross over the American border, plain and simple. They do not respond to incentives to stray from this path, it has now been learned. For thousands of migrants in the approaching caravan have rejected the offer of government benefits to stay in Mexico.

“Under the ‘You are at home’ plan, [migrants] would have received benefits if they applied for refugee status and stayed in the country’s two southernmost states,” NBC reports. Welfare benefits were thus awaiting any member of the caravan who decided to cut the journey short, and stay in Mexico. However, this offer did not sway the migrants.

NBC reports, “Several thousand Central American migrants turned down a Mexican offer of benefits if they applied for refugee status and stayed in the country’s two southernmost states, vowing to set out before dawn Saturday to continue their long trek toward the U.S. border.”

The “You are at home” plan offers a wide range of provisions. Migrants would receive shelter, medical attention, schooling and jobs. The Mexican President even referred to the plan as but the first step to a permanent refugee status. However, thousands of migrants refused “to accept anything less than safe passage to the U.S. border,” according to NBC.

One migrant from Honduras, Oscar Sosa, explained the objective of the caravan. “Or goal is not to remain in Mexico,” Sosa said. “Our goal is to make it to the (U.S.). We want passage, that’s all.”

If the intention of these migrants was not fully understood before, their refusal of benefits to stay in Mexico makes the situation quite straight forward. Ultimately, they are not fleeing violence or oppression. These people are not looking to simply escape the trials of their home country and find the first safe place to establish themselves. They are in route to cross over into the United States. This is their objective and their driving force behind why they have left their home country.

How they obtain entry is evidently of little concern. These migrants are not patiently waiting in line like the millions of people around the world properly seeking legal entry into America. The caravan plans on just walking over the border and forcing their presence into a country whether they are welcomed or not.

“On Friday, the Pentagon approved a request for additional troops at the southern border, likely to total several hundred, to help the U.S. Border Patrol,” NBC reports. It remains to be seen what range of action is available to these troops and U.S. Border Patrol to prevent the inevitable crossing of the caravan.