You’ve probably heard morsels of news about the state of Louisiana’s contract – voided this week – to purchase 10,000 new voting machines. It’s become an issue in the otherwise-moribund Secretary of State race, with the incumbent Kyle Ardoin under fire given accusations of bid-rigging made by the losing bidder.

There are two companies involved here. The one which won the contract which has now been voided is Dominion Voting Systems, whose machines, as we understand it, spit out a paper receipt which can be stored and checked against electronic records in the event of controversy over someone “hacking” an election. The losing company is Election Systems & Software (ES&S), whose voting machines have been in the news as being problematic because they allow remote access – making them vulnerable to hacking – and when their bid was rejected in favor of Dominion’s bid they immediately accused Ardoin as the Secretary of State of bid-rigging.

Courson Nickel, if you’re not aware, is THE Democrat lobbying firm in Louisiana at present. If you want to get close to John Bel Edwards and gain influence with the governor, you want to hire Courson Nickel.

In fact, Bud Courson was the organizer of John Bel Edwards’ inauguration back in January of 2016. Jim Nickel is the former executive director of the Louisiana Democrat Party.

ES&S didn’t hire these guys to lose a $95 million contract.

The problem is, ES&S didn’t make a good enough bid for the voting machine contract. Not even close.

The thing to understand is that the Secretary of State wasn’t even on the committee evaluating the bids. Ardoin had been on a committee evaluating bids when he was the deputy Secretary of State earlier this year, but he came off it before the bid selection was made – he says he pulled himself off, and the Director of the Office of State Procurement says she pulled him off and he didn’t object; it really doesn’t matter. Point is, this is an Office of State Procurement show. Meaning it’s a Division of Administration show.

Who’s the Commissioner of Administration? That would be Jay Dardenne, the former Republican lieutenant governor who became John Bel Edwards’ pet poodle when he endorsed the governor during the 2015 runoff in exchange for his current job. Dardenne is the guy Edwards trots out to give bipartisan credibility to those threats to put seniors out of the nursing homes, etc., if your taxes don’t get raised. That Jay Dardenne has sold his soul for a fat pension is no longer in doubt. And when Jay Dardenne does something, you are quite safe in assuming he’s doing it on John Bel Edwards’ command.

Meaning that this is John Bel Edwards’ show. He’s the man behind the curtain here.

The letter that Paula Tregre, the bureaucrat running the Office of State Procurement, wrote yesterday blowing up the voting machine bid reads like 17 pages of washing machine instructions. It’s gibberish. What it does offer, though, is some pretty mind-blowing information.

For example, here are the scores for the three companies bidding on these voting machines…

Got that? This was not a close call. It’s pretty obvious Dominion’s bid was the best of the three.

So who was on the committee handling these bids? There were five people:

The committee was under the supervision of Austin Bachman, who works for the Division of Administration.

So the accusation is that Kyle Ardoin rigged the bids against ES&S using a pair of technocrats in his office making up a minority of a committee supervised by one of Dardenne’s guys. And they must have REALLY rigged those bids to generate that difference in scoring.

The committee came back with the scoring on July 11 and recommended Dominion get the contract. On July 30, Ardoin’s office said they concurred. On August 2, OSP approved the recommendation and a week later sent a congratulatory letter to Dominion letting them know they’d won the contract.

And on August 16, Ardoin was the deciding vote at the State Bond Commission banning a pair of anti-gun Wall Street banks, Citigroup and Bank of America, from getting work financing state debt. Why is that significant? Well, as Ardoin was the swing vote on the Bond Commission he was the subject of a major arm-twisting campaign from a lot of the governor’s allies. Threats were made, and personal ruin was promised. There is even a story going around that we heard earlier this week to the tune that Edwards had made guarantees to those banks he’d insure the Bond Commission wouldn’t make trouble for them, in return for some major support for his re-election next year.

Ardoin voted with the conservatives and against the governor.

And on August 23, ES&S filed their protest against the award of that voting machine contract.

Again, here’s a link to Tregre’s letter. She actually shoots down as invalid practically everything ES&S alleged in their protest. Except for one thing which apparently is the reason she dumped the contract. And you’re not going to believe it.

Well, yes you will.

Here’s the part where she throws out Dominion’s bid… 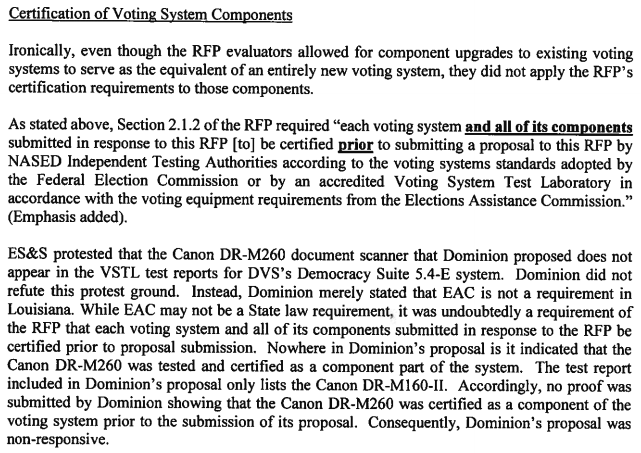 In case that made your eyes glaze over, there’s a component in the voting system Dominion is using in their bid which is a Canon document scanner.

Specifically, this, which is the Canon DR-M260. A screenshot of its page on Canon’s website…

ES&S is complaining that this thing hasn’t been tested by the Elections Assistance Commission. But what has been tested is the Canon DR-M160-II, which is this…

They’re the same machine. They even sell for the exact same price.

The correct inference to draw here is that Tregre was told she’d better find some justification to kill that bid as an October surprise to use against Ardoin, and this was all she could come up with.

This is, by the way, remarkably similar to the way the 2016 flood recovery program manager contract was blown up by the State Licensing Board of Contractors last year. We covered the heck out of that mess; our readers should be pretty familiar with it. It seems pretty clear that’s this administration’s modus operandi.

What’s really unfortunate about this is there are Republican candidates for Ardoin’s job who are parroting the line that Ardoin rigged those bids, which is John Bel Edwards’ line. It’s disconcerting to see Republicans allowing themselves to be used as Useful Idiots because they’re trying to be relevant. News flash, guys – you’re not relevant; you’re pawns. And it might be time to ask your political consultants you’re paying so much money to that you can’t even afford to buy television time in the last month of the race if they even know who Bud Courson and Jim Nickel are, much less are doing what they can to make millionaires out of them.

And here you thought the Secretary of State race was boring. Not so fast.

UPDATE: The Louisiana Republican Party came to a similar conclusion, via its Facebook page…

The decision by the Edwards’ administration to reverse its previous decision awarding the $95M voting machine contract to Dominion Voting Systems, Inc. is suspicious in the extreme. In fact, it reeks of the dirty old Louisiana politics that Gov. Edwards promised would never blot his administration- remember his oft-repeated “Honor Code” comments during the campaign?

The voting machine procurement process was conducted by a methodically thorough independent evaluation committee over a period of several months. The winner, Dominion, was rated as having the clearly superior system. At the conclusion of this process, the Governor’s own Office of State Procurement approved the independent committee’s recommendation and issued a notice of intent to award the contract to Dominion on August 9, 2018. That award has suddenly been reversed on a minor technicality by one of the Governor’s minions in the same Office of State Procurement which had previously recommended awarding the contract to the clear winner.

Why the reversal of a decision made only two months earlier by the same administration department? Why now, just weeks before the mid-term election? And most importantly, why further delay the purchase of badly needed voting machines equipped with the latest hack-proof hardware and software?