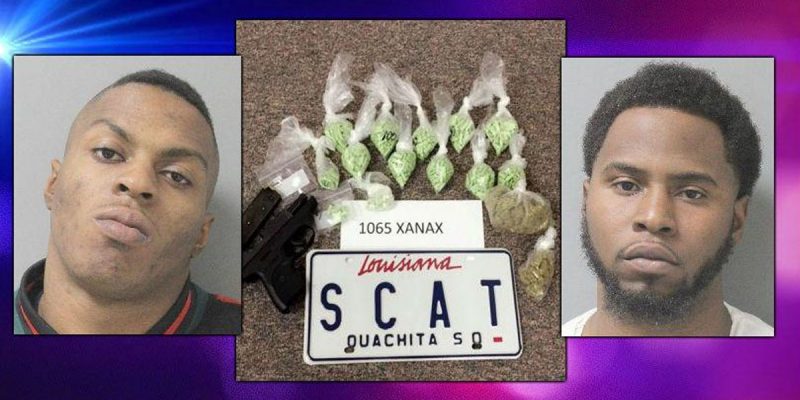 Two men have been arrested after allegedly being caught with over a thousand Xanax.

The Ouachita Parish Sheriff’s Office says SCAT officers pulled over Adidas Nike Brown and Lamere Turner on Highway 594. During the traffic stop, they allegedly found 32 grams of marijuana, 4 ecstasy tablets, 1 Oxycodone tablet, and 1,065 Xanax. They also had a handgun in the vehicle.

You read that correctly – 26 years ago a woman went to the hospital and delivered a baby she named Adidas Nike Brown.

His name is Adidas Nike Brown.

Again: Adidas Nike Brown. He’s the one on the left in the photo above.

In the annals of bad names that has to be among the biggest fails ever. Exactly how is Adidas Nike Brown going to emerge from poverty and ignorance and become a pillar of his community? Who could expect that to happen?

In the wake of last week’s midterm elections, with Democrats in the House of Representatives attempting to consolidate power under their new rules of intersectionality – and busily chastising white women in the suburbs for not sufficiently voting against the white male oppressors of the Republican Party – it might not quite be fashionable to consider this a teachable moment on how a community fails.

But it is definitely that.

You are not doing your children any favors by naming them after brands of athletic shoes, and particularly when you give them two different competing shoe brand names as given names. It is readily apparent this is the case to people who live in functional communities – and in fact, in such functional communities a new mother attempting to abuse her children in such a fashion would immediately be set upon by relatives and peers not to make such a mistake.

But in the poor community in Monroe – we assume Adidas Nike Brown isn’t a transplant from somewhere else – it’s clear the standards and support present in other communities which would prevent such idiocy are not in place.

The result being that Adidas Nike Brown, who was doomed from birth by virtue of his comically inappropriate name, not to mention the circumstances which underlay that comic and tragic appellation, was busted with over 1,000 Xanax pills he sought to purvey to others. And Adidas Nike Brown is destined for a life of moral, intellectual and economic poverty – because who is ever going to take someone with such a name seriously?

It takes self-respect and a desire for social mobility in order to better oneself. And there are few surprises in this world. Nothing about the Xanax bust story in Ouachita Parish is a surprise, as ludicrous as it is that the perpetrator’s name might be Adidas Nike Brown.