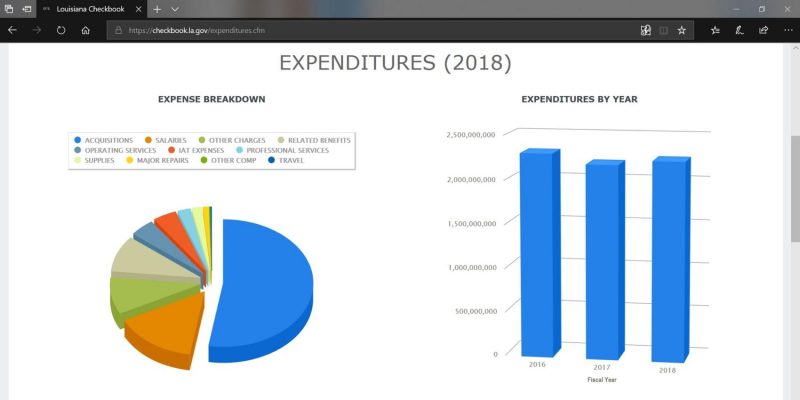 More than one third of state governments are doing a great job with fiscal transparency, a new report released by the non-partisan, non-profit organization, Truth in Accounting (TIA) indicates. Louisiana is not one of them.

The Pelican State ranked ninth-last with a score of 62 out of 100.

To encourage the publication of transparent and accurate government ﬁnancial information, TIA created a “Financial Transparency Score” for ﬁnancial reporting. It evaluates several factors ranging from whether a state used an independent auditor to examine its annual financial report to how accessible reports were online.

Bergman added that Louisiana’s score was “somewhat lower than average” for two reasons.

“Two interesting reasons why included the fact that the state’s financial statements are not audited by an independent accountant, and that the state didn’t receive a clean opinion on the latest audit,” he said.

No state earned a perfect score of 100. However, 19 states scored well on a curved grade, receiving A’s (scores between 80 and 85), with Utah earning an 85 for being the most fiscally transparent. Twenty-one states received B’s; three states received C’s; six received D’s (including Louisiana). Connecticut received the lowest failing grade of 44, less than half of Utah’s grade.

This past summer, a successful statewide movement to make state government more fiscally transparent launched with the signing of legislation to upgrade the site LouisianaCheckbook.com. The law passed on unanimous votes in both chambers on the final day of the second special session.

A coalition of community and business leaders urged lawmakers to update the antiquated site.

“The best way for government to win back the trust of the people is to shine a little light into how they are spending the people’s money,” the coalition said in a statement.

The purpose behind fiscal transparency, the Checkbook coalition argues, is ”Taxpayers have a right to know how government is spending our money. It’s basic common sense that if government is going to ask us to pay taxes that we should be able to see how those funds are spent, in real time without having to navigate complicated processes.

“This should be true in any state, but it’s particularly important here in Louisiana, given our history of corruption and wasteful spending,” the coalition said. “After all, sunlight is the best disinfectant, and providing this level of transparency is the next, critical step to rebuilding trust in government.”

The Lafayette Parish School System was the first local government entity in Louisiana to provide financial transparency to the public online. It launched a new website, LafayetteCheckbook.com, in September.

“It’s hard to conceive who would be against [transparency],” Justin Centanni of Lafayete, a school board member from District 6, told Watchdog.org.

“While there is a great deal of focus on state governments’ budgets, the results of those budgets are found in a government’s comprehensive annual ﬁnancial report (CAFR),” TIA notes. The CAFR is produced annually and is audited by a certiﬁed public accountant.

TIA’s analysis found that all 50 states produced CAFRs that are in a searchable PDF format; 46 states received a clean opinion.

Louisiana, Missouri and Nebraska received qualiﬁed opinions, meaning the auditors found the ﬁnancial statements were fairly presented, except for a few speciﬁed issues. New Mexico received a disclaimer of opinion, meaning “it in essence ﬂunked its audit.”

State governments should report all retirement liabilities on their balance sheets, including a net pension liability measured on the same date as the CAFR that is “not distorted by misleading and confusing deferred items,” TIA says.

TIA notes that no state reported its current pension liability amounts and none accurately reported their net position. Instead, they “used confusing accounts called deferred outﬂows and inﬂows,” according to the report.

“Surprisingly, only 15 states used outside certiﬁed public accounting (CPA) ﬁrms to audit the state CAFR,” the report says. “The other states used auditors who work for the state, which brings into question their ability to provide an independent opinion.”

The ten states with the most fiscal transparency, according to TIA, are Utah, Washington, West Virginia, Virginia, South Dakota, Idaho, North Dakota, Alaska, Georgia, and Indiana.