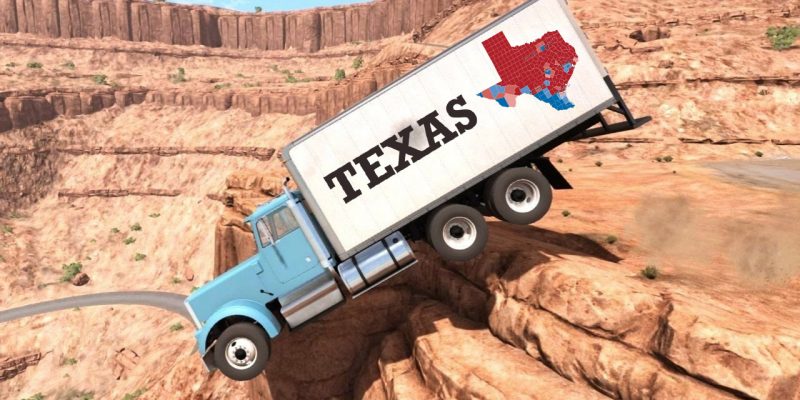 As Texas goes so goes the rest of the nation:

This according to the venerable talk show icon Rush Limbaugh, who devoted a portion of his postmortem election episode on the Lone Star State. And he sounded worried for the future of not only Texas but the other 49.

All eyes are now on Texas as Democrats hope to seize Texas in addition to California, New York, and Illinois, to secure a lock on the future of Congressional power for the foreseeable future, according to Rush’s analysis.

Anxiously camped out at an El Paso watch party (closer to California than the easternmost parts of Texas, it should be added) the typically liberal press were practically salivating over the possibility of heretofore obscure Democratic U.S. Rep. Robert Francis “Beto” O’Rourke of El Paso (TX-16) unseating Republican firebrand Sen. Ted Cruz. It ended up a narrow victory for Cruz, who pulled off a 51-49 percent win and even eliciting an F-bomb from O’Rourke.

Cruz’s margin of victory should have been a more comfy margin of 6-8 percent according to reliable polling. Instead, he was trounced in Texas’ top-five largest counties and saved only by the conservatism of rural and suburban counties.

O’Rourke was the focal point for Texas Democrats this cycle. A yard sign for gubernatorial contender Lupe Valdez or Attorney General candidate Justin Nelson could rarely be found in Democrat lawns. Yet even along seldom-traveled rural gravel roads the austere black “BETO” yard signs were common, greatly outflanking Cruz signs (the campaign was reluctant to distribute many yard signs early on). Roughly $80 million in campaign cash mostly from outside sources helped, too.

O’Rourke also benefited from sustained enthusiasm from the 2016 presidential election year. The entirety of 2014’s turnout (the last gubernatorial election year) was exceeded by Day 2 of early voting this year. Many of these new 2016-18 voters were (and are) swing voters and formerly inactive voters. And no small number of them were upset with Donald Trump and looking for a liberal champion.

This dynamic fed in to the defeat of many-a Republican on election night — but mostly in geographically small, urban jurisdictions. O’Rourke’s coat-tails mixed with liberal disdain for President Donald Trump made for a difficult night for conservatives in these districts. The Texas Freedom Caucus lost three of its legislative members. Even longtime incumbents closer to the moderate side of the GOP teetered dangerously off the cliff or were replaced by largely unknown Democratic challengers. Republicans still hold both legislative chambers and all statewide offices (including Governor and Lieutenant Governor). But statewide victories now seem within grasp with nine out of their 13 statewide Democrat candidates racking up over 45 percent of the vote in their respective races.

So how did Texas, perceived to be a standard-bearer for conservative governance and the rugged individualist ideal, end up taking such a shellacking Tuesday night?

Limbaugh chalked it up to discouragement on the part of Republicans and pure vitriol by voters angry enough at Trump to support a relatively obscure Congressman (in the form of O’Rourke) against Cruz.

Turnout for this election topped 52 percent of registered Texas voters — the highest since 1970 in Texas.

Compare this to 2014 when pro-abortion rights state Sen. Wendy Davis was the Democratic nominee for Governor (and the focal point for Texas Democrats as O’Rourke was this season) and beloved Texas Attorney General Greg Abbott was considered a shoe-in. The total Texas turnout in 2014 was around 34 percent. Truthfully, it hasn’t been over 50 percent since 1994, which was the last time Texas was truly in play on a statewide level (since then Republicans have dominated in all statewide elections).

Roughly seven out of every 10 ballots cast were straight-party votes — up from about six in 10 during the last gubernatorial election. Taking Travis County (home to Austin, the state’s capital) as a case study: out of 483,050 votes, 297,461 were straight-party. In Travis County, the Dems outnumber the Republicans nearly 3-to-1 in most contests. That means almost automatic wins for down-ballot Democrats who were (presumably) not vetted by the newly minted hordes of straight-ticket voters.

That spelled big trouble for otherwise conservative districts which cut into Travis County and rely on suburban, exurban, and rural areas to carry Republican candidates. The Third Court of Appeals, a bastion of the GOP which takes in a swath of the Central Texas Hill Country and Austin, saw all of its members up for election wiped out due to the juggernaut of straight-Democrat votes. All four candidates — each incumbents (one only technically due to a recent appointment) — lost handily. And it wasn’t only the Third Court of Appeals, but also the Fifth Court of Appeals which is now majority Democrat. In total, Republicans lost 32 of the 33 appellate court six-year terms up for election.

Speaking of other heavily populated Texas counties (O’Rourke took the top 5) Harris (home to Texas’ largest city, Houston), 60 Republicans lost to Democrats up and down the ballot. One of their representatives, embattled Democratic Rep. Ron Reynolds, won out of his jail cell. In all fairness he was unopposed, but the lack of Republican opposition may lend credit to Limbaugh’s discouragement hypothesis and fears of a “blue wave” holding back candidates and even prospective candidates.

In North Texas, Dallas County will soon see its least Republican representation since 1971. In typically conservative Tarrant County, the third-most populous county in Texas and home to Fort Worth, the margin for Cruz was smaller than expected with only 49.3 percent to O’Rourke’s 49.9.

A President’s party losing seats, even in friendly states, is nothing new. Trump and Ronald Reagan each lost 26 U.S. House seats in the middle of their first terms. Barack Obama, by comparison, lost 63 and Bill Clinton 52. To put that into a Texas perspective, Texas lost two of its GOP Congressional delegation among other tight races on election night.

The coat-tails may not be as easy to ride on in the next Texas election season. Straight-ticket voting is set to end in 2020, joining a majority of states in ditching the practice.

Whether the momentum of motivated Democrats will continue in Texas depends on two things: 1) sustained outrage over Donald Trump into 2020, and 2) liberal voters taking the time to check off every individual race as they go down the ballot (and past whoever the next sacrificial lamb of the Texas Democratic Party will be in two years).

Interested in more news from Texas? We've got you covered! See More Texas News
Previous Article Should There Be A Blacklist Of Bad-Actor Political Consultants In Louisiana?
Next Article Here are 11 examples of Jim “Accost”a’s outrageous unhinged behavior [videos]