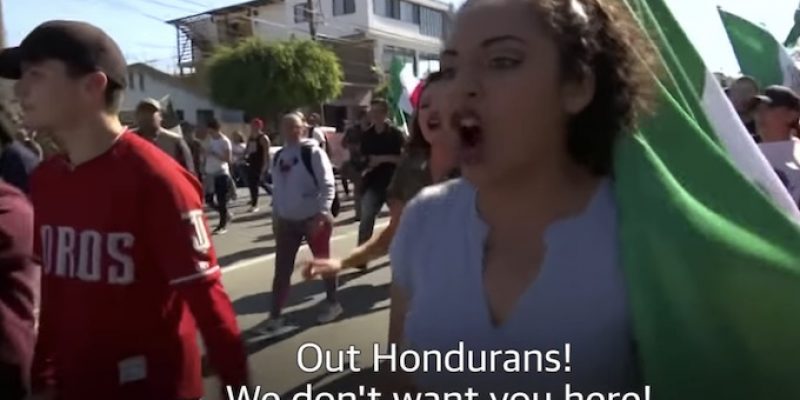 A group of 100 migrants went to the U.S. Consulate in Tijuana and demanded that President Donald Trump either allow them entry into the U.S.– or oust the Honduran president, Juan Orlando Hernandez, from office– and pay every migrant $50,000 to return to Honduras.

He refers the $50,000 as reparations for U.S. intervention in Central American governments.

The group gave the U.S. a 72-hour deadline to respond. (If this weren’t true, it would be comical.)

The Department of Homeland Security did respond, however, saying:

“In case you haven’t seen, some of the so-called ‘asylum seekers’ at our Southern border are now demanding the United States pay them $50,000 to return to their home countries. As we’ve said all along, based on historic data and open source reporting, the overwhelming majority of caravan members are not legitimate asylum-seekers — if they were they would seek refuge in the first safe country they entered.”

The statement, from DHS assistant press secretary Katie Waldman, added that being in a migrant caravan does not give them special rights to enter the United States.

Guerrero Ulloa, a suspected terrorist, left Honduras in 1987, after he was accused of planting a bomb in a Chinese restaurant that injured six U.S. soldiers in Honduras. Guerrero Ulloa rejected the claims made against him and sought asylum in Mexico, despite protests made by U.S. government officials. At the time, Mexican diplomats called him a “freedom fighter” while U.S. officials called him a “terrorist.”

Despite this, this year, Guerrero started an online petition requesting that the U.S. government exonerate him.

For the last 31 years Guerrero has been living in Mexico City with no bank account, selling jewelry. He joined the caravan of Central Americans migrants on Nov. 4, saying “It’s a joy to be able to serve my country again. Sleeping here in the cold, eating what everyone else is eating, brings me joy.”

Guerrero said he joined the caravan to express his opposition to Honduras’ president, Juan Orlando Hernandez.