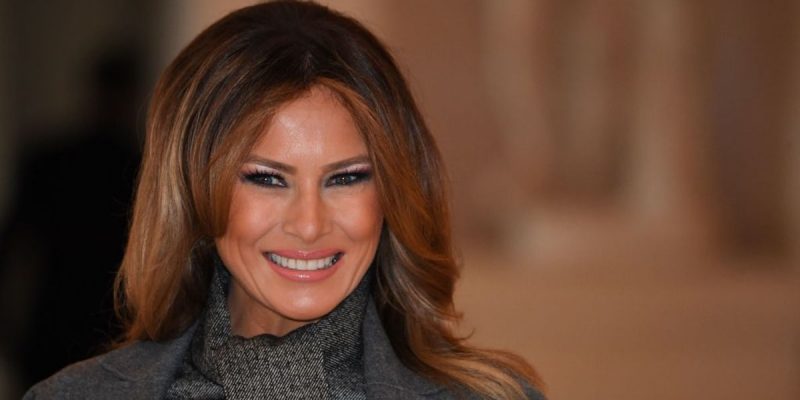 Every year on the Ringside Politics program, we award our “Turkey” of the year during Thanksgiving and our “Champion” of the year in late December. This year, the “winner” of our turkey award was House Speaker Paul Ryan, a fitting choice for such a failed leader. However, our “Champion” award was a more difficult selection. During the past year, many fine people distinguished themselves in a positive way Finally, after input from our great listening audience, our decision was clear. For many reasons, including her grace and style under unrelenting criticism and pressure, First Lady Melania Trump was chosen as our Ringside Politics Champion of the Year.

The latest example of critics abusing the First Lady occurred earlier this week. Leaving on Christmas night, President and Mrs. Trump made a surprise visit to American troops serving in Iraq. It was a trip that made a very positive impact on the troops, who warmly greeted the President and the First Lady.

Not surprisingly, the visit drew criticism from the liberal media because some of the troops displayed “Make America Great Again” hats and asked the President to sign them. Of course, the same liberal media said nothing when then President Barack Obama signed his picture and military gear for our troops in Kuwait and at Fort Stewart, Georgia.

On social media, nasty critics reserved some of their venom for the First Lady, criticizing her wardrobe, especially her choice of “Timberland boots.” On Twitter, she was blasted as “the biggest idiot in the room” for her sensible choice of footwear. In reality, Mrs. Trump looked fabulous as usual, but those who hate her husband also regularly insult her for everything from her fashion to her accent.

Since Mrs. Trump was born in Slovenia, English is not her native language. Thus, she is the first non-native speaker of English to hold the position of First Lady. In fact, she is so accomplished that she is fluent in six languages. None of this stopped untalented leftist late-night talk show host Jimmy Kimmel from mocking her accent.

While Mrs. Trump is regularly criticized, and lampooned, former First Lady Michelle Obama received constant praise during her tenure for “courage” and “beauty” and “intelligence.” She was celebrated on 12 magazine covers and is still a regular guest on the late-night “comedy” programs. In contrast, Melania Trump has not been invited to grace magazine covers nor be a guest on the network talk shows.

This nasty treatment is another indication of the unbelievable media bias that is heaped on the First Family on a regular basis. Mrs. Trump is a former fashion model who would be a perfect fit for a magazine cover and an accompanying feature.  She is not only beautiful, but she is also a successful businesswoman who launched a jewelry line and introduced a brand of caviar-based skincare products. Certainly, she has a fascinating story to share with fellow Americans, but few media outlets seem to have an interest.

In another indication of the bias directed toward Mrs. Trump, several fashion designers, including Tom Ford, Marc Jacobs, Christian Siriano, Zac Posen, and Sophie Theallet, refused to provide outfits for her to wear. Of course, Mrs. Obama faced no such discrimination from fashion designers.

The abuse of Mrs. Trump was noted by “Wheel of Fortune” host Pat Sajak, who tweeted “If she were married to someone the media approved of, it would be all Melania all the time. Every move would be breathlessly recorded, and every outfit would be featured in multiple publications. Her intelligence and beauty would be highlighted 24/7.”

When not boycotting Mrs. Trump, the media is heaping abuse upon her. In response to Mrs. Trump’s beautiful Christmas decorations at the White House this year, lifestyle magazine House Beautiful was anything but complimentary. Instead, the magazine claimed it was reminiscent of the horror movie “The Shining.”

If there was any real journalism left in our country today, reporters would be trying to learn more about our appealing First Lady. Melania Trump is a woman of many attributes, including tremendous courage. As the only First Lady to fly in a V-22 osprey aircraft, it should surprise no one that she accompanied her husband on his trip to Iraq. Thus, it became the first time since 1969 that a First Lady had visited our troops in a combat zone.

Melania Trump epitomizes the qualities that Americans should admire in our First Ladies. While clearly both fashionable and beautiful, Mrs. Trump’s most impressive qualities are her toughness and determination in the face of a hostile media environment. For the first two years in the White House, Melania Trump has represented this country well, displaying both class and dignity.

Thank goodness she is now our First Lady, a tremendous improvement from the previous occupant of that position. She is a worthy recipient of our Ringside Politics Champion of the Year award.

Interested in more national news? We've got you covered! See More National News
Previous Article VIDEO: We’re So Old We Can Remember When Chuck Schumer Was A Border Hawk
Next Article APPEL: What’s Coming To Louisiana In 2019?