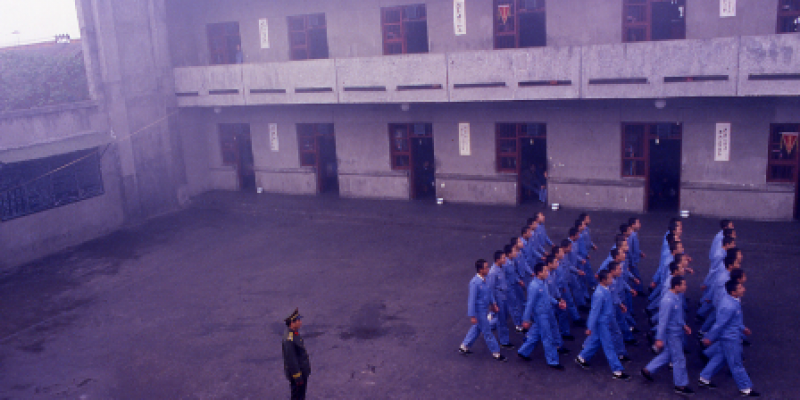 More than 1 million Chinese men and women have been imprisoned in a mass detention camp because of their “religious” beliefs, mostly Muslims and Christians. Authorities from the Xinjiang Propaganda Department claim they are “re-educating” mostly “ethnic minorities” and denies that they are being held in internment camps. They claim the inmates signed agreements to receive vocational training.

The Associated Press reported that those held in the camps have been “sewing clothes that have been imported all year by a U.S. sportswear company.”

The camp, in Hotan, China, is one of a growing number of internment camps in the Xinjiang region, “where by some estimates 1 million Muslims are detained, forced to give up their language and their religion and subject to political indoctrination,” the Post reports.

The Chinese government is forcing some detainees to work in manufacturing and food industries.

The Associated Press (AP) tracked recent, ongoing shipments from one internment factory — Hetian Taida Apparel —  to Badger Sportswear, a leading supplier in Statesville, North Carolina. Badger’s clothes are sold on college campuses and to sports teams across the country.

Such imports are illegal in the U.S., Badger CEO John Anton told the AP. He said the company would stop imports and shipments while it investigates.

Hetian Taida’s chairman Wu Hongbo confirmed that the company has a factory inside a “re-education compound,” and said they employ trainees whom the government identifies as “unproblematic.”

“We’re making our contribution to eradicating poverty,” Wu told the AP over the phone.

Chinese authorities say the camps offer free vocational training for Uighurs, Kazakhs and other minorities, mostly Muslims, as part of a plan to bring them into “a modern civilized” world and eliminate poverty in the region.

A Chinese Foreign Ministry spokeswoman accused the foreign media Monday of making “many untrue reports” about the training centers. Spokeswoman Hua Chunying said, “Those reports are completely based on hearsay evidence or made out of thin air.”

The Associate Press reports otherwise– after interviewing 12 people who either had been in a camp or had friends or family in one. They said that detainees were given no choice. Most of the Uighurs and Kazakhs, who were interviewed in exile, told the AP that many held professional jobs and were retrained to perform menial labor.

Some workers were paid nothing; some earned up to several hundred dollars a month. One person estimated that in one county more than 10,000 detainees — or 10 to 20 percent of the internment population — is working in factories. And some are earning roughly one tenth of what they earned before.

A former reporter for Xinjiang TV in exile said that during his month-long detention last year, young people in his camp were taken away in the mornings to work without compensation in carpentry and a cement factory.

“The camp didn’t pay any money, not a single cent,” he said, asking to be identified only by his first name, Elyar, because he has relatives still in Xinjiang. “Even for necessities, such as things to shower with or sleep at night, they would call our families outside to get them to pay for it.”

Rushan Abbas, a Uighur in Washington, D.C., said her sister is among those detained. She told the AP: “American companies importing from those places should know those products are made by people being treated like slaves. What are they going to do, train a doctor to be a seamstress?”

Another told the AP: “They say it’s a factory, but it’s an excuse for detention. They don’t have freedom, there’s no time for him to talk with me,” she said. “They say they found a job for him. I think it’s a concentration camp.”

“Not only is the Chinese government detaining over a million Uyghurs and other Muslims, forcing them to revoke their faith and profess loyalty to the Communist Party, they are now profiting from their labor,” said Smith. “U.S. consumers should not be buying and U.S. businesses should not importing goods made in modern-day concentration camps.”