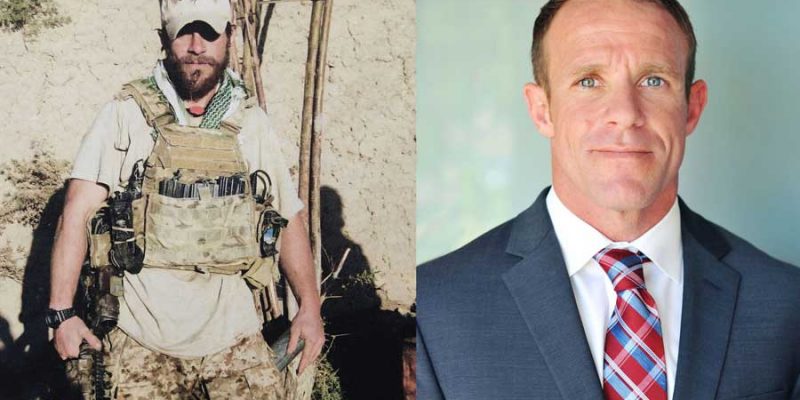 “Navy SEAL Chief Edward “Eddie” Gallagher allegedly texted a photo of himself cradling a dead ISIS fighter’s head in one hand while holding a knife in the other and boasted that he ‘got him with my hunting knife,’ Navy prosecutors said,” Task and Purpose reports.

Isn’t the point of killing ISIS– to kill ISIS?

According to a lengthy report published by Task and Purpose, it appears that Gallagher is being referred to court-martial after a Navy judge held an Article 32 hearing. The hearing only requires probable cause of a crime in order to determine recommendation for a full trial.

Gallagher, a 19-year veteran of the Navy, has been charged with four counts of violating military law, the most serious of which is premeditated murder. On or about May 3, 2017, according to the charge sheet, Gallagher allegedly murdered a wounded ISIS fighter by stabbing him in the neck and body with a knife.

Again– isn’t the purpose of killing ISIS to kill ISIS?

Warpinski, who has been investigating the case since April, told the hearing officer he had taken sworn testimony from 9 members of Gallagher’s unit, SEAL Team 7 Alpha Platoon. According to Warpinski, the platoon was operating in Mosul alongside the Iraqi Emergency Response Division when the alleged murder occurred.

Doesn’t the Navy have anything better to do with its time?

Why is it going after a 19-year Navy SEAL

The Iraqis called in an airstrike on a building and then subsequently captured a wounded ISIS fighter, who Warpinski approximated to be about 15 years old. After the fighter was taken prisoner and medics began treating him, a SEAL medic, C.S. told NCIS that Gallagher “walked up without saying anything at all” and started stabbing the prisoner.

The medic told investigators that what he witnessed left him in “complete disbelief.”

There were three eyewitnesses to “the alleged murder” according to NCIS.

AGAIN– why is this murder– when the point of killing ISIS is to KILL ISIS?

To quote Hillary Clinton, “What difference does it make?” Isn’t the point to kill the enemy before the enemy kills U.S. military members and civilians?

Task & Purpose also reported: “There were four EOD technicians assigned to Alpha Platoon, none of whom have made any statements, formal or informal, to NCIS regarding this matter.”

How is Gallagher holding up a dead ISIS member’s head any different than U.S. troops taking photos of the dead Saddam Hussein?

In one photo saved on Gallagher’s phone, he is shown holding up the dead fighter’s head still attached to the body in one hand, and holding his knife in the other.

During cross-examination, Gallagher’s civilian defense attorney Philip Stackhouse seemed to imply that other SEALs had engaged in similar behavior and posed with bodies: “Did you ask whether every person took a picture with that ISIS fighter that day?” he asked (Warpinski said no). Stackhouse also asked why NCIS did not seize the entire SEAL platoon’s phones for evidence.

Gallagher, a trained sniper, was one of the “most experienced sniper[s] in the platoon.”

Gallagher began his Navy career as a corpsman attached to the Marines, and later became the first non-Marine to graduate from the Corps’ Scout/Sniper school shortly after Sep. 11, Task & Purpose reports. Gallagher deployed for nine months to Iraq and Africa in 2003 as a corpsman and sniper with a Marine infantry unit.

Gallagher became a SEAL in 2005, served as a lead sniper, lead platoon medic, and lead petty officer, among other leadership roles with the teams. He earned the Sailor of the Year distinction from the Navy in 2014, and was awarded two Bronze Star awards for combat valor; the first for bravery in Afghanistan when he was with SEAL Team 1, the second for actions in Iraq during his last deployment with SEAL Team 7.