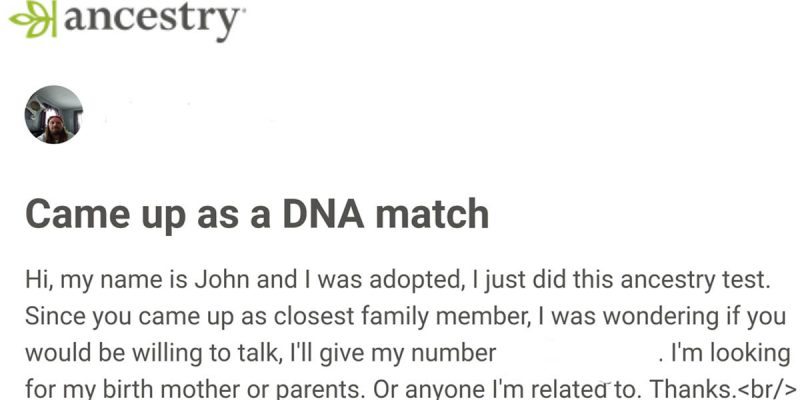 Editor’s Note: Another in this week’s series of reposts of Hayride Best Of items from 2018 is this gem from Matt Howerton from April of this year…

I mainly wanted to know my ethnic background so I made the decision to buy an Ancestry DNA kit during their holiday promotion. My mom took the time to tell me about my brother a couple years before the tragic car accident that took her life. She was forced to give up through adoption at age 17.

“I think about him every day, I just want to know that he’s okay, that he’s alive.” she said with tears in her eyes.

“No we can’t, it was a private adoption,” she shook her head in hopelessness.

I insisted, “I’ll find him one day.” I jotted down his birth name on a Fedex business card along with any other details I could gather and put it by my bed where it sits to this day.

In the back of my mind, I hoped he might have done the DNA test as well. The kit sat on my nightstand for a couple of weeks, waiting for the right moment when I didn’t “eat or drink for 30 minutes” per the instructions. Once using, activating and returning the kit, the processing takes several weeks. On the fifth week, I had been checking the website regularly with no luck. Then one morning, I was blindsided due to the fact that I either didn’t receive or didn’t see an email that the results were in. I received a message from an ancestry user named John:

“Hi, my name is John and I was adopted, I just did this ancestry test. Since you came up as closest family member, I was wondering if you would be willing to talk, I’ll give my number… I’m looking for my birth mother or parents. Or anyone I’m related to. Thanks.”

The message hit me like a ton of bricks, could this be the son my mom always wanted to meet?

I opened the link to his profile and upon seeing his photo, I immediately began crying almost hysterically.

He had her long, strawberry-blonde hair and kind eyes. I could barely contain myself, it was a powerful mix of emotions; a kind of joyous grieving. I tried to compose myself because I was dying to hear his voice. Being that I was very close to my mom, it felt like I was channeling her emotions in her absence.

As soon as I could speak, I called him. “Hey, John?” I said in a shaky voice. Is it really you, I thought. “This is Matt, was your birth name Richard?” He replied, “Yes, I was born in Chicago.” I shamelessly broke down in tears. “Oh my God, we thought we couldn’t find you!”

The sentiment was mutual but I could tell he was in shock and I knew what he would ask next, “Is mom still alive?”
I paused. “I have some bad news, mom was killed in a car accident less than a year ago. I’m sorry.”

He responded, “Oh.. I figured she might not be. I wish I would’ve been able to meet her.”

I went on to explain how she told me about him with tears in her eyes and clearly loved and missed him which meant the world to him.

“She wanted to know you were okay and that you had a good life.” I said, holding back tears. “Oh, I did. She gave me to a good family.”I took a sigh of relief, “She would be so happy to hear that.”

Since that day, we have spoken on almost a daily basis, sometimes for hours on end. He has a beautiful daughter, my niece. Mom always wanted grandchildren but just didn’t know she already had one. I speak to her through Facebook messenger quite often now. And just a few weeks before the 1 year anniversary of her death, my brother’s wife gave birth to a handsome baby boy. I believe she now knows her grandchildren through the eyes of God.

Incredibly, we did the test at the exact same time, the results were within 12 hours of each other. Upon realizing this, we both thanked God for reuniting us, it was divinely ordained. We don’t know why God chooses the times and events that he does but we trust in him wholeheartedly. After the tears, John wanted to know if I was a follower of Christ which I am. And I wanted to know if he was a conservative, haha, which he is.

Tears flowed as I wrote this. I thank God daily for helping me realize my beloved mother’s dream of finding her son and allowing me to honor her legacy. He has a flight to Houston later this month, stay tuned for the follow up story and photos/video of our being united. God is so good.

You can read the sequel to this story here.

Interested in more national news? We've got you covered! See More National News
Previous Article BATISTE: City Park’s Leftism Was On Holiday Display This Year
Next Article BAYHAM: A Festivus Miracle And Some Airing Of Grievances