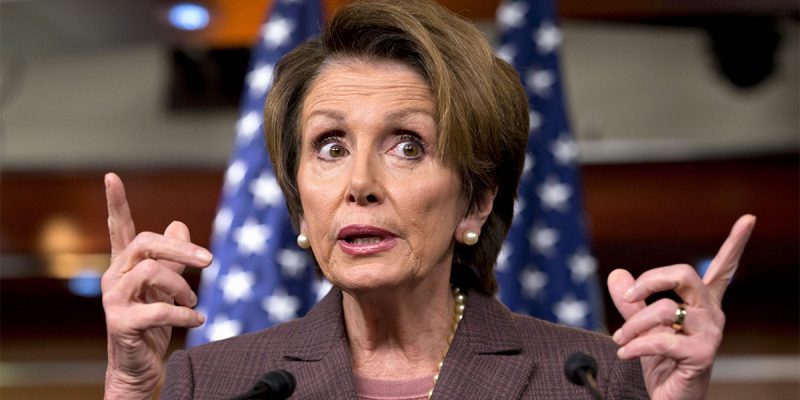 Does anyone wonder why Obama, Pelosi, Schumer, and the majority of Democrats so strongly supported a border control barrier before they flip-flopped and opposed the President’s attempts to install one?

The answer as to why they abruptly reversed their earlier position and in Pelosi’s case embraced the phony immorality claim seems on the surface to be very plain. To the media it can be stated in one word, Trump! But the true basis for their hypocritical cartwheel is buried in the politics of a Democrat Party leadership struggle.

We know that the media hates President Trump as much as Democrat leaders do and their clear intent is to use the power of the press to destroy a presidency that seeks to unravel closely held liberal policies. But in doing so they are carefully avoiding any hint of linkage to the underlying cause of the political reversal that in itself may portend the destruction of the traditional Democrat Party.

There is no evidence that Democrats ever cared much about controlling drug smuggling or the entry of a criminal element across our borders. So why were they once so strong in their near-uniform effort to limit illegal immigration? The answer embraced by the pre-Trump Democrats was purely economic.

The Democrat Party has long held itself out as the savior of low-income people. From the Progressives of the early 20th century, to the New Deal of FDR, to the Great Society of LBJ, and more currently to Obamacare, Democrats have slowly moved America’s political philosophy to the Left. By subtly tapping into the fundamental fairness of Americans, Democrats have slowly pushed the nation further and further toward a social welfare state.

Before the unexpected success of Bernie Sanders’ socialist campaign in 2016, those who led the Party held themselves out to be “uber” liberal but they still held on to a belief in the power of capitalism to improve lives. This principle was that the low income class could rise above poverty given a reasonably good-paying job.

Democrats fought hard through policy and the courts to create life-altering jobs for this important element of their Party’s base. Significantly they recognized accurately that unfettered illegal immigration was a direct threat to those jobs and also to the middle class, many of whom were union members. So in order to protect their constituent base they were almost unanimous in their support of border control, including barriers.

But now those established Democrat leaders, under siege from the far Left, have surrendered their authority to the overwhelming power of a foolish philosophy. They fear the loss of their own influence and so they are willing to abandon their own long-suffering supporters in order not to be left behind by what they perceive as a groundswell for socialism within the Democrat Party and beyond.

The Left long ago recognized that the American people would never accept a sudden political upheaval and so they developed a strategy of long term, incremental political change. But now the current political rhetoric of the emerging leaders of the Democrat Party promote a strategy that would destroy a century of carefully implemented social change. By trying to impose a rejection of our nation’s fundamental economic and social underpinnings through their goal of ending capitalism as we have known it, the newcomers have made clear to the American people that the result would be a concurrent conversion into a full blown socialist state. This will not end well for Democrats and the liberal Establishment knows it.

The hurried elevation of national socialism as Party policy violates all the tactics that Democrats had utilized so successfully. More frightening to the liberal Establishment, the newcomers seem to be building a strong following within the traditional Democrat base. A slow, incremental effort toward a socialist state may have been the unspoken goal of traditional Democrat politicians but the batch of up-and-comers are throwing all of that under the bus. They want full blown socialism and they want it now. A hundred years of effort should not stand in the way of their ambitions.

How does all that relate to the sudden flip-flop by Democrats on the a border barrier? We must remember that a basic tenet of the socialist psyche is that there are no economic class distinctions. Therefore, all people, no matter where they come from or what their previous circumstances were deserve the same acceptance and social standing as everyone else; in effect they believe that we are all citizens of the world and there should be no class barriers, economic or social, and especially no border barriers.

And who pays for this folly? Two groups of American people will carry that burden – in fact, two groups who form the base of the Democrat Party will pay for it. Because of their vast numbers, the traditional middle class will pay for it. They pay for it in taxes, in lost prosperity, in everything that has made America great. The low-income class will also pay for it. Though they may enjoy early perceived gains through government handouts, Venezuela tells us that it is the poor that will suffer the most due to an economy that does not create any opportunity for prosperity.

But inconvenient facts don’t matter to modern Democrat socialists; their concept is to lower the bar to the lowest common denominator so that anyone who makes it across our border will be entitled to everything that citizens had been entitled to. The cry is “fairness,” though socialism disdains any concern about fairness to legal citizens. To the new Democrats that’s it; whatever illegal immigrants make it in are entitled to be swallowed up into the great American social support system. Any wonder that illegally entering aliens leave their homes by the thousands with the expectation that they will be embraced by the largesse of the American people?

The sovereignty of the United States and the economic security of millions of low income Americans has fallen prey to the perfect storm of a President that is hated because he is dismantling century-old liberal gains and an Establishment Democrat leadership who is paralyzed with fear over their intraparty rivals’ misguided trust in socialism.

This political catastrophe has forced the Democrat Party to literally abandon its most ardent support groups in favor of open borders and illegal immigrants; aliens who are happy to accept lower pay thereby displacing low and middle income citizens from the potential of economic prosperity. How cynical these national liberal politicians are.

Now history begs a pivotal question, will the traditional base of the Democrat party see through the abject fear of the socialist newcomers being exhibited by their liberal Establishment? Will they recognize that they are being sacrificed on the altar to the socialist gods?