If you didn’t notice it last week, that attack on Ralph Abraham signaled by partisan hack Advocate reporter Tyler Bridges was part of a coordinated assault on the Republican gubernatorial candidate by numerous elements within the John Bel Edwards camp.

No sooner did Bridges’ Advocate article surface making (unconvincingly) the case that Abraham was an Indian giver of sorts on a pledge not to take his Congressional salary – Abraham donated the salary from his first term in Congress to St. Jude and the Independence Fund, a charity which helps wounded veterans, but learned that Congressional rules prevent him from earning a profit at his medical practice and therefore it wasn’t feasible to renew that no-salary pledge following the 2016 election – than there was an immediate outpouring of “reaction” from all the usual suspects.

Starting with Democrat political consultant and JBE team member Trey Ourso, posting on Twitter under the handle of Gumbo PAC – the trial lawyer-funded surrogate for Edwards – who spared no hyperbole in attempting to turn the story into a something… 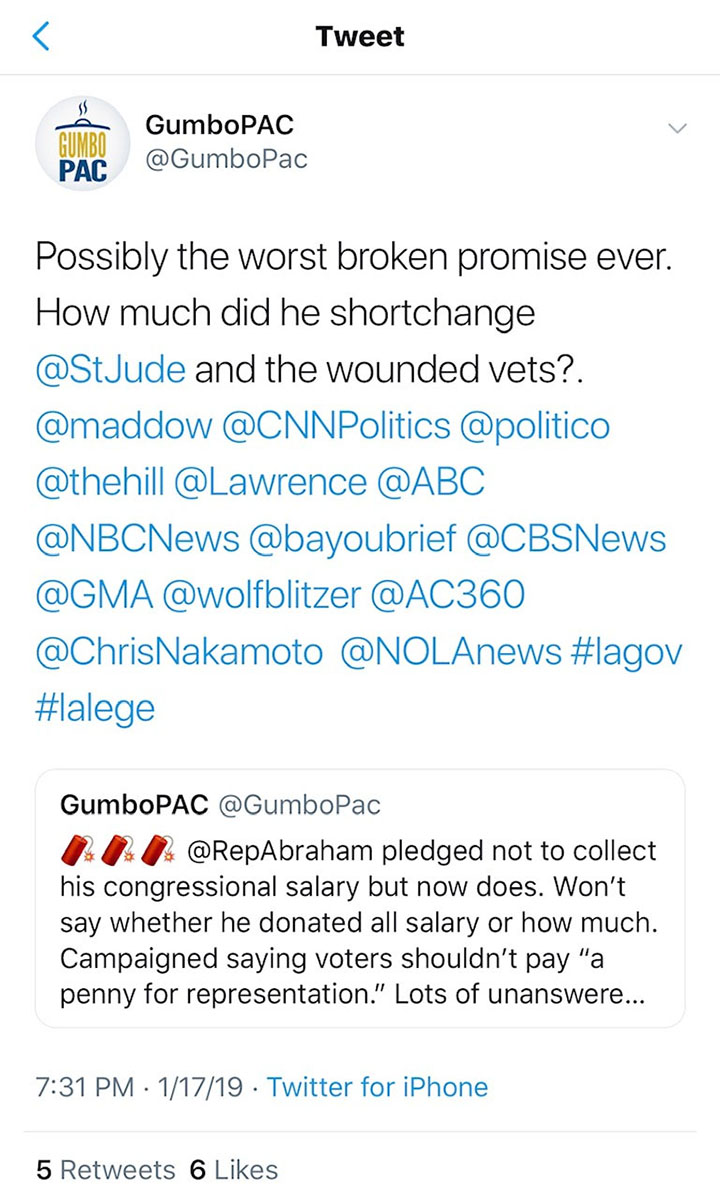 Then there was Edwards cat’s-paw Lamar White, who immediately posted a piece of invective at his site claiming that Abraham “owes” St. Jude and the Independence Fund “between $348K-696K” because he stopped donating his salary to charity. The post is an interminable 3,000 words, and it’s a screed full of cockamamie claims like, for example, the idea that Ralph Abraham was a puppet of the Bobby Jindal faction in the 2014 5th District congressional race – which is patently false, as to the extent Team Jindal had a candidate in that race it was Zack Dasher, not Abraham. 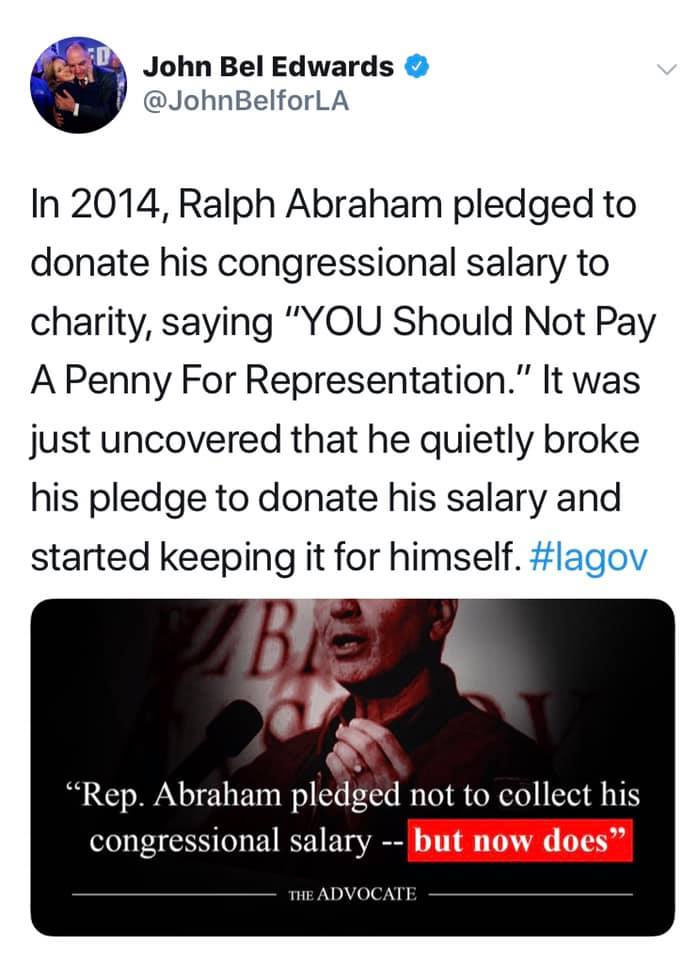 Lyin’ @Abraham_Ralph promised voters he would donate his salary to charities like St. Jude Children’s Hospital. Now, he admits he broke that promise. #LAGov pic.twitter.com/uBqUrLl4SY

Then over the weekend the Advocate’s partisan Democrat editorial writer Stephanie Grace chimed in with a column excoriating Abraham as a liar while also claiming that Donald Trump is somehow profiting from being president – a claim which says a lot more about Grace’s acumen as a financial analyst than it does about Abraham’s conduct.

None of these clearly-coordinated attacks appeared to generate a lot of buzz; most of what we saw by way of a response came from Abraham’s team shooting them down.

But one independent response we did see did a good deal of damage to the narrative of Ralph Abraham, Breaker Of Charitable Promises. It’s a letter to the editor of the Advocate by Brian Allen, a building contractor who works with St. Jude in building that charity’s Dream Homes in the Monroe area and its environs. Here’s what Allen had to say…

That letter was sent in to the Advocate on Friday, the day after the controversy over Abraham’s charitable donations was manufactured and rolled out for the public eye. Today is Tuesday, and the Advocate has yet to publish Allen’s letter – which appears to be a rather damning indictment of the Advocate’s media bias in assisting to promulgate it in the first place.

Sure, one can criticize Abraham for an awkward treatment of a promise he might have been naive in making. He quietly ceased promising to forego his congressional salary when running for re-election in 2016 and his opponents failed to make an issue of that. But what is puzzling is the idea this is a worthwhile political attack to make in the first place. What’s going on here is an attempt to demonize a man who gives large sums to charity because he’s not giving enough? How does such an attack not rebound into the face of the attacker?

Particularly when St. Jude’s own volunteers step up to defend Abraham.

What’s instructive about this, though, is not just the fact Edwards’ camp is knit together to launch coordinated attacks in both major and social media. That was expected. But it also proves something we’ve thought for quite some time – namely, that this will be the nastiest gubernatorial campaign that Louisiana has had in decades, if not its entire modern history. Edwards has some $8.4 million to burn in this campaign, and he has no record of achievement at all to run on. And the Democrat Party, which consists of nothing but demonization nowadays – when they’re not trying to smear the President of the United States as a Russian spy they’re publicly attacking Catholic high school students for wearing MAGA hats in public – is desperate to hold on to its only governorship in the Deep South. The only possible outcome from those circumstances is nonstop character assassination against the two Republicans running against Edwards.

The question is whether Abraham and his team have the fortitude not just to withstand the attacks from Edwards’ team but to meet them with equal force – not the vicious character assassination Edwards and his pals have on offer, but a thorough examination of the governor’s atrocious record in office. Do that and the public will see through garbage like the St. Jude blitzkreig the Edwards team unleashed late last week.

Interested in more national news? We've got you covered! See More National News
Previous Article After The 2019 Elections, It Might Be Very Difficult To Find WMD In Louisiana
Next Article Texas Senate Shakeup: Moderate Republican Now In Role Of Gatekeeper