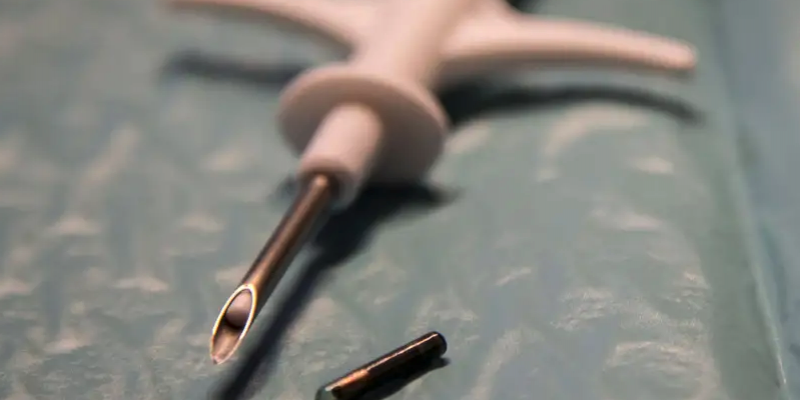 This is not a joke or fake news. This is actually happening right now.

The Independent reports that Swedish workers were implanted with microchips– the size of one grain of rice– to replace cash cards and ID passes.

Microchips are injected in between the thumb and index figure and injected with a syringe.

“What could pass for a dystopian vision of the workplace is almost routine at the Swedish startup hub Epicenter. The company offers to implant its workers and startup members with microchips the size of grains of rice that function as swipe cards: to open doors, operate printers, or buy smoothies with a wave of the hand.”

The injections have become so popular that workers at Epicenter hold parties for those willing to get implanted.

Could this be anymore insane? Or stupid?

Patrick Mesterton, co-founder and CEO of Epicenter, says the microchip basically “replaces a lot of things you have, other communication devices, whether it be credit cards or keys.”

The human microchip is similar to the one used for pets. Except these chips show how often an employee comes to work or what they buy at a store.

Epicenter oversees more than 100 companies and roughly 2,000 employees. It began implanting some employees with microchips four years ago, in January 2015.

A volunteer getting a chip implanted in his hand (EPA)

Microchips use near field communication (NFC) technology– the same used for contactless credit cards or mobile payments– to transfer a small amount of data between two devices through electromagnetic waves.

Imagine having your hand hacked– which is a huge possibility.

According to Ben Libberton, a microbiologist at Stockholm’s Karolinska Institute, he told the AP that hackers “could conceivably gain huge swathes of information from embedded microchips,” creating huge ethical dilemmas. (No kidding.)

Microchips throw privacy out the window. Imagine all of the data collected and stored in your hand– what happens to it, who uses it, for what and why– is completely out of the control of the user. People who willingly become chipped are quite literally giving their lives away.

This is truly sick: “The implants have become so popular that Epicenter workers stage monthly events where attendees have the option of being “chipped” for free.”