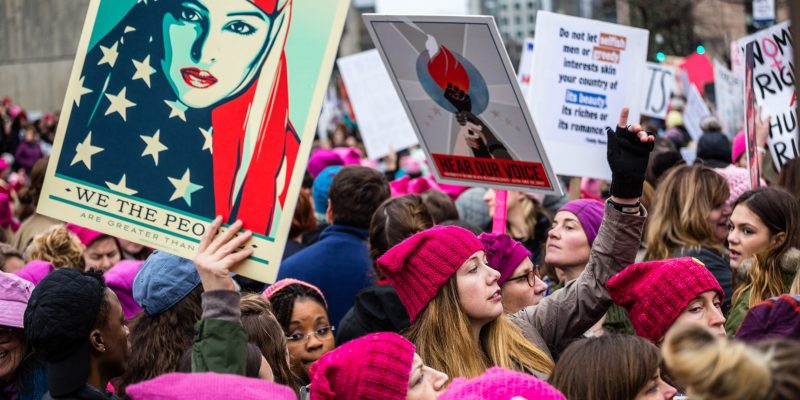 Women’s March co-chair Bob Bland went on a left-wing podcast, The Great Battlefield, to discuss her organization. One of the topics which came up was the allegations of anti-semitism among her fellow co-chairs. Instead of unequivocally denouncing anti-Semitism, she launched an attack on their critics.

The Great Battlefield host Nathaniel G. Pearlman asked, “One of the things that is unavoidably in the air is some controversy around the leadership and who they let in and who they don’t let out and who they censure and so on. What is the truth about that?”

Bob Bland first began talking about how instead of calling it the People’s March they called it the Women’s March. Then she talked about how terrible the system is.

At around the 48:00 minute mark, she finally began to address the anti-semitism allegations. “A lot of the people who are making the biggest claims against us as organizers and as leaders right now haven’t even done the very initial work on themselves when it comes to racism in particular,” said Bland. “But then also as Islamophobia and some of the other things we were very specific about in the Unity Principles.”

Bland then claimed they have spent “thousands of hours” talking to communities about racism and bigotry because “they really care” and “all women have a place for them in Women’s March.”

Bland then took aim at Jewish, and other women, that object to their anti-semitism who she says they “feel like their issues are more important.” She went on to describe how hard it was to run an “intersectional” movement because they had to spend a lot of time on one issue at a time. But they shouldn’t worry because they will “always mobilize for our communities.” They also talked about their role raising money for the relief efforts for the Pittsburgh Synagogue shooting.

Bland later suggested that her fellow Women’s March co-chairs were being demanded to do things she was never asked to do because they were people of color.

What her fellow co-chairs; Tamika Mallory, Carmen Perez, and Linda Sarsour are being asked to do is denounce well-known anti-semite and Nation of Islam leader Louis Farrakhan. All three women have ties to Farrakhan. The reason why Bland has never been asked to denounce Farrakhan is that she has no known ties to him.

Bland even suggested that it was good that Jews feel pain. “If you’re feeling pain, good. That means you’re actually doing the work. If you think you need to be comfortable to do this work, maybe you shouldn’t be in social justice.”

Basically, if you’re opposed to the anti-semitism of the Women’s March, they don’t want you around anyway. You’re probably really a racist and an Islamophobe as well. If the gaslighting by Bland was any indication, they have no plans to change course.

People who have supported the Women’s March have a choice to make this month. Do they march in support of an organization that is run by anti-semites and those who don’t think it’s a big deal? Or do they follow the example of the New Orleans chapter and not march?

If you participate in the Women’s March, you can shut up forever about racism because your hypocritical asses have no standing on this.