We’ve got some happy news to report in the case of Dr. Kevin Work, the abortionist at Delta Women’s Clinic in Baton Rouge who had, it appears, been practicing without a medical license in a pretty flagrant abuse of ethics and the law.

Our readers will remember the case from our post a week ago. Work, who has had his license suspended on four different occasions for various rather serious violations of medical ethics and standards, had been reinstated a bit more than a year ago for the very limited purpose of “wound care.” He took that inch and went a mile, turning up at the Baton Rouge facility to do abortions, something which came to the attention of the state Attorney General’s office and Louisiana Right To Life, who then sent a letter to the State Board of Medical Examiners complaining about the development.

Which led to this announcement from the LSBME yesterday afternoon… 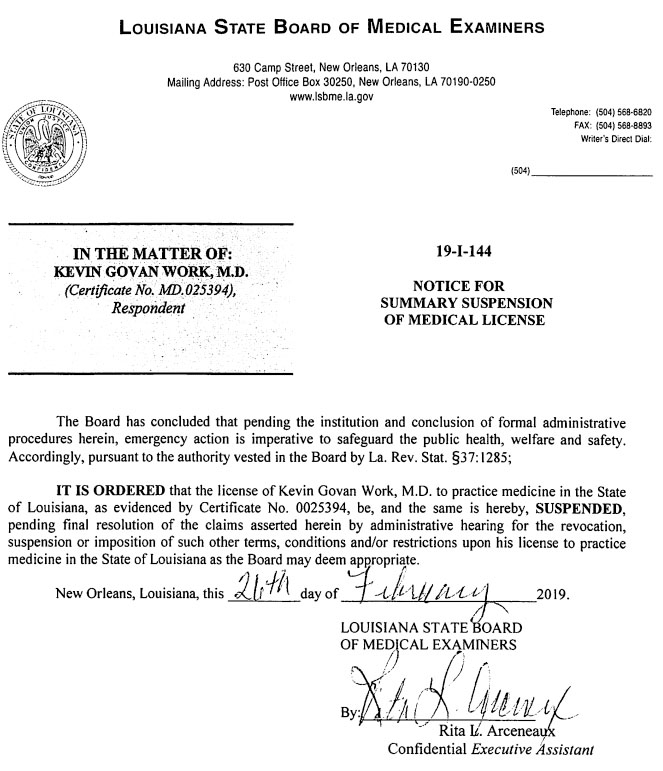 Louisiana Right To Life is, as you might imagine, elated.

Yesterday, the Louisiana State Board of Medical Examiners (LSBME) issued a “Notice for Summary Suspension of Medical License” on its website notifying the public that the medical license of Dr. Kevin Govan Work has been suspended pending “final resolution” in an administrative hearing. The notice states that “pending the institution and conclusion of formal administrative procedures herein, emergency action is imperative to safeguard the public health, welfare, and safety.”

Last week, Louisiana Right to Life sent a letter of concern for public safety to the Louisiana State Board of Medical Examiners about Dr. Kevin Work, the probation of his medical license, and his current practice at two outpatient abortion facilities, Delta Women’s Clinic in Baton Rouge and at Women’s Healthcare Center in New Orleans. Louisiana Right to Life also issued a press release on the matter.

Benjamin Clapper, Executive Director of Louisiana Right to Life, said the following: “We applaud the Louisiana State Board of Medical Examiners for their prompt action in investigating Dr. Kevin Work and taking emergency action to protect the safety of the public. We look forward to learning more about the LSMBE’s final action on this investigation.”

Clapper’s statement is spot on. The other item of interest here is what this case says about Louisiana’s admitting-privileges law, which will be the subject of a Supreme Court review in the legal case of June Medical Services v. Gee – that’s the lawsuit the state’s abortion industry filed alleging that Louisiana’s law requiring all outpatient medical facilities performing procedures requiring significant amounts of anaesthesia have someone on hand with admitting privileges to a local hospital would put its abortuaries out of business.

To say that the case of Kevin Work illuminates the need for such a law is an understatement, no? Now we know that the abortion industry in Louisiana is happy, or at least satisfied, with inflicting unlicensed quacks on women in crisis and putting the public in danger. Even if you’re “pro-choice” you have to see that as a breach of faith and an alarming development, and demand better.

Which is what the Louisiana legislature did when it passed that law – if abortion is to be legal in the state at least we can insure it’s being done by people who won’t kill the mother along with the child. And yet the abortion industry can’t even accept that small bit of regulation without taking it to court.