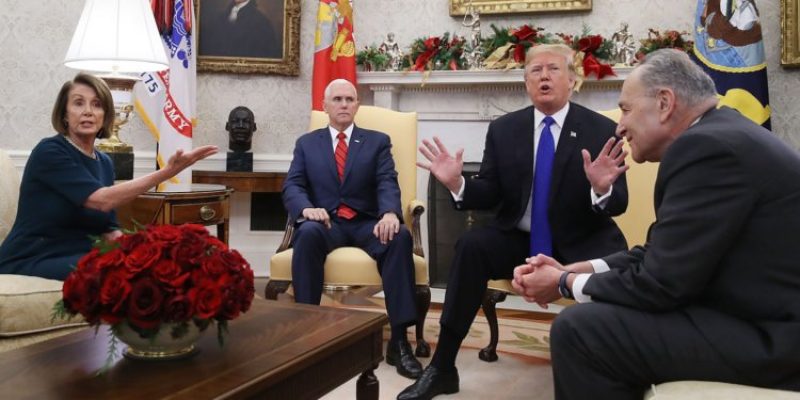 (Washington, D.C.) – President Trump will sign the bill to fund the government according to Senate Majority Leader Mitch McConnell (R-KY), the most powerful member of the U.S. Senate.

But he will also declare a national emergency “at the same time” in order to obtain the funds and authority needed to expand on current barriers at the US-Mexico border.

McConnell made the announcement on the Senate floor this afternoon, calming fears of another partial government shutdown that could be only be averted until Friday when the current temporary funding bill will expire.

“He has indicated he is prepared to sign the bill. He will also be issuing a national emergency declaration at the same time.” – Senate Majority Leader Mitch McConnell

Also today, Vice President Mike Pence told reporters that the President is taking a careful look at the bill before making a final decision:

“I think the President’s evaluating what’s in the bill. He’s also evaluating the authority he has and I know he’ll be making a decision before the deadline.”

The 1100+ page funding bill that the President will likely sign reportedly includes at least $1.3 billion for border security, far less than the $6 billion that President Trump previously requested.

Sen. Richard Shelby (R-AL), who is the Chairman of the House Appropriations Committee, said this week that he “prays” President Trump signs the bill.

Democrat leaders in Washington are scrambling to respond and prepare for an emergency declaration from the Trump White House. House Speaker Nancy Pelosi (D-CA) has already threatened legal action if the President follows through on the proposal.

Senate Minority Leader Sen. Chuck Schumer (D-NY) warned that Trump would be “making a huge mistake”. He and Speaker Pelosi issued a joint statement cautioning the President from going forward with an emergency declaration:

“Declaring a national emergency would be a lawless act, a gross abuse of the power of the presidency, and a desperate attempt to distract from the fact that President Trump broke his core promise to have Mexico pay for the wall.”

Interested in more national news? We've got you covered! See More National News
Previous Article More on Beto and his actual WALL [video]
Next Article GURVICH: What Is A “Moderate Democrat” These Days, Anyway?