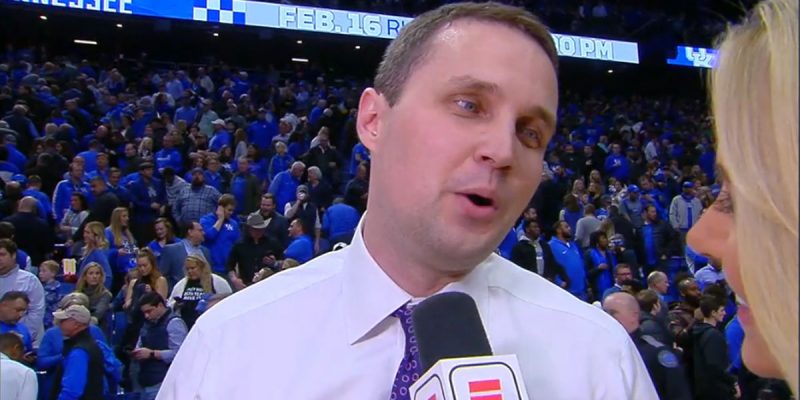 …which done got proved out tonight when Coach Wade went an’ pulled off a big upset 73-71 over Kentucky at dere place. My uncle T-Claude is on de Kayak makin’ reservations in Tahiti for havin’ put his fishin’ camp down on LSU and ‘dose 9 points dey was catchin’ at de tip.

Now, they got a lot of complainin’ goin’ on by not just the Kentuck-eee fans whinin’ that this was some kinda basket interference or dat goal-tendin’ or whatnot. But them same people got some splainin’ to do in an’ of demself, on account o’ this here…

That’s a pretty clear defensive goaltend on my boy Skylar Mays’ shot, an’ it’s not just that this cat’s hand is inside the rim. He’s touchin’ the rim, and when that other guy comes an’ slaps the backboard between ’em they shake the goal. Which the rules say you don’t get to do.

Not to mention with 8 seconds left in the game they let Kentuck-eee get away with an over-the-back on a rebound that was kinda hard to imagine anybody would let go. And at that point LSU was up two, so if they’d gotten that foul they’d have been at the foul line with a chance to make it a two point game and it’d have been over.

But that ain’t how Kentuck-eee’s coach John Calamari – er, Calipari – saw it…

“Do you remember when we lost in the Final Four?” Calipari asked in his news conference when asked about the final shot. “There was a shot-clock violation. They said it was not reviewable. And then they changed the rule to say why would you want to lose the game on a shot-clock violation and it’s easy to go check?

“Well this one’s easy to go check, too. Just go check it. Why would that not be reviewable?”

Nah, bro. The refs checked to see if Kavell Bigby-Williams tipped it in before the clock ran out, an’ he did. Offensive goaltendin’ and so on ain’t reviewable. An’ Calamari knows that.

Is what it is, padnuh.

So that was that. Things worked out pretty much like they shoulda, an’ nobody can say anything.

Especially not to people in Louisiana. This is where a Super Bowl got stolen away, y’know. And before that we had that Texas A&M football game which was ripped off from us back in November.

Leastways, we was due. I ain’t even sayin’ this was some sorta cosmic makeup call. If anything it was a makeup call for how the game got called Tuesday, because LSU had plenty to bitch about as it was goin’ on.

Forget all that. It was a helluva basketball game with two real good teams goin’ at it. It’s clear the SEC has three potential Final Four or suchlike type teams, between LSU and Kentucky and Tennessee, an’ the league’s gonna be heard from deep into the NCAA Dance.

An’ LSU is in that mix. Which is all right. Will Wade has made all this fun again. An’ Tennessee is comin’ in for a sold-out, knock-you-on-yo-ass war on the 23rd. So we got that to look forward to.

Will knows it. He’s tryin’ to tell everybody without braggin’ about it…