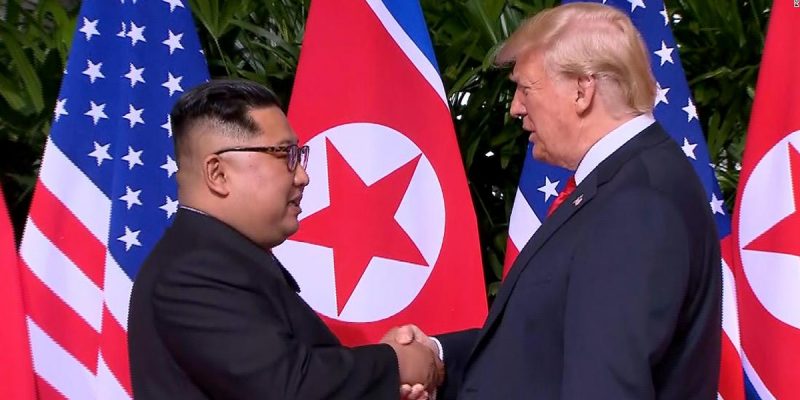 This past week, President Trump was in Hanoi, Vietnam negotiating with North Korean dictator Kim Jong-un. This was their second summit, which marked tremendous progress from previous administrations. Ultimately, the goal of these talks will be to remove of nuclear weapons from the Korean peninsula. Unfortunately, the North Koreans were not willing to commit to making serous strides toward the goal of denuclearization, so the President refused to ease any of our economic sanctions that have been placed on the country. The end result was no signing agreement, but the expectation is that talks will continue.

Having two summits with North Korea within a year after decades of intensifying threats signifies a significant improvement in relations between the two countries. It shows how an actual leader like President Trump can achieve real results in a short period of time.

Until recently, the North Korean dictator was testing nuclear weapons and building nuclear facilities. He was also holding Americans hostage. Today, the hostages have been released, the nuclear testing and expansion has stopped, and remains of American soldiers killed in the Korean War have been returned to the United States.

For decades, American President have failed miserably in altering the dangerous behavior of North Korea. In fact, the situation became worse with each succeeding administration. Under President Trump, it has been just the opposite as there has been significant progress in negotiations with North Korea. This improved relationship has led to a safer situation around the world, positively impacting hundreds of millions of people.

President Trump should receive a Nobel Peace Prize for his remarkable contributions to lowering the threat of nuclear war. Unfortunately, the Norwegian Nobel Committee, which selects the prize winners each year, will almost certainly overlook President Trump. This committee has a very progressive agenda, which can help explain why Barack Obama was nominated for a Nobel Peace Prize, which he eventually won, after just 11 days in office. Obama had done literally nothing to promote world peace, but he still received the award. He just represented “hope and change,” while President Trump has made real progress toward peace in this dangerous region of the world.

Not only are President Trump’s achievements being ignored by the Norwegian Nobel Committee, but these positive results are also being ignored by the American mainstream news media. While the summit with North Korea generated press headlines across the world, not surprisingly, in this country, the media focused on domestic politics.

The big story involved the congressional hearings featuring the President’s former attorney, Michael Cohen. He was a witness who should have never been given such an opportunity, especially since he was disbarred and can no longer practice law. He already lied to Congress and had been convicted for that crime and others, including lying about his taxes. Nonetheless, the media and congressional Democrats salivated about this prime opportunity to damage the President.

The hearings were extensively covered live by both cable and broadcast television networks. The Trump-hating media hoped that Cohen would be another John Dean, the White House attorney who turned against President Nixon in the throes of the Watergate scandal and helped force him to resign.

The media breathlessly hyped Cohen’s testimony and covered it with enthusiasm. Despite his history as a liar, Cohen was given tremendous credibility by the media. He was also conferred elevated status as the President’s top confidant and attorney. In reality, Cohen was one of many attorneys who worked for President Trump.

During his testimony, Cohen admitted he never visited Prague, Czechoslovakia, as alleged in the completely discredited Steele dossier. Interestingly, he was also forced to admit that his legal team spoke with Democratic members of congress, such as House Intelligence Committee Chair Adam Schiff (D-CA), prior to the hearing. Was such coordination collusion?

Regarding Trump colluding with the Russians, Cohen admitted that he had no proof, although he had “suspicions.” Overall, this spectacle achieved its objective of inflicting political damage on President Trump and distracting the nation from the North Korean summit. In Cohen’s testimony, there were no damaging revelations, instead it was just another reminder that the Democrats and the media will stop at nothing to destroy their hated enemy, President Donald Trump.