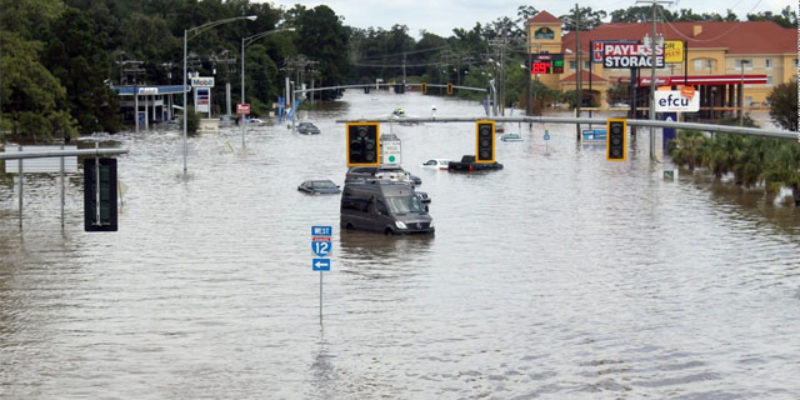 Yesterday a lawsuit was filed in federal court by a lawyer in Denham Springs on behalf of a pair of his family members who have gone through a significant rigamarole from the federal bureaucracy over duplication of benefits in flood recovery – and a legislative change made which should keep that federal doctrine from preventing flood victims from getting aid appropriated for them.

A Denham Springs couple whose home flooded in August 2016 sued the Trump administration on Monday, seeking to have a federal judge declare that a new law would allow the Livingston Parish residents to pay off part of their SBA loan using state recovery dollars.

The plaintiffs, Jeffry and Amanda Meyer, are among thousands of households caught in what’s become widely known as the “duplication of benefits trap” after the historic floods of 2016.

People who received, or even just applied for, U.S. Small Business Administration loans had their loan amount counted against them when they sought state recovery grant dollars later through the Restore Louisiana program.

Under U.S. Department of Housing and Urban Development guidance, the value of the SBA loan, even if it was never actually taken, was subtracted from the value of any state grant through Restore. Often the loan value was so large, it wiped out the value of any potential state grant offer, leaving homeowners with nothing to gain from the state recovery program.

Hundreds of residents and state and local officials fought HUD’s interpretation of the existing law and pushed for a change.

In October, President Donald Trump signed changes to the federal Stafford Act that proponents said would eliminate the old duplication of benefits interpretation.

“The law is clear and certainly Congress and the president thought the law was clear after it was passed and so we can’t let bureaucrats decide whether or not they want to implement a law passed by Congress and signed into law by the president,” said J.R. Whaley, one of the plaintiffs’ attorneys.

HUD, which funds the state recovery program, has viewed an SBA loan, which residents must pay back, plus a reduced interest rate, as a federal benefit on par with a free grant, so, the agency says, one can’t duplicate the other.

The state’s Congressional delegation has been all over this issue. Both Louisiana’s Senators, Bill Cassidy and John Kennedy, put holds on HUD appointments in order to pressure the administration to fix its treatment of duplication of benefits to comply with the change in the law last month.

And yesterday Garret Graves, the congressman representing the bulk of the areas flooded in the August 2016 event in and around Baton Rouge, had a fairly strong statement on the occasion of the lawsuit…

Congressman Garret Graves (South Louisiana) issued a statement today after victims of Louisiana’s Great Flood of 2016 filed a federal lawsuit against the U.S. Department of Housing and Urban Development to force payment for duplication of benefits claims. The lawsuit seeks a declaratory judgement that would force the federal government to comply with a law that Graves and Congressman Cedric Richmond (D-LA) authored and that the president signed into law on October 5, 2018 to fix the so-called duplication of benefits fiasco.

Graves said: “The word frustrating hardly conveys what our flood victims have had to endure, and this suit complements our ongoing efforts to get flood victims their money. We have been working with the attorneys and plaintiffs of this case while continuing to push the issue on our end through meetings and weekly calls with HUD and other administration officials. The bureaucrats at HUD are going to be held accountable for not doing their job.

Here’s the deal: our bill to eliminate the duplication of benefits provision – the flawed policy calling a loan and grant duplicative and that has prevented a host of Louisiana flood survivors from accessing Restore Louisiana grants – passed the House three times last Congress, the Senate finally passed it too and the president signed it into law in October last year. The law is fixed, and the $250 million we appropriated for duplication of benefits flood victims has been sitting there for two years. This is nothing more than bureaucracy at its worst, continuing to inflict additional harm to flood victims. And while the HUD bureaucracy has unlawfully dragged this out, homes have been foreclosed upon, people are struggling with medical bills, and other financial strains have further compounded the impact of this disaster.

The law we wrote and that HUD is breaking provided 45 days for them to issue the guidance they now cite as the final hurdle – that would have been the third week of November 2018. No more excuses. It’s time for an accountability check. We haven’t asked for a flight to Mars here; we’re simply asking them to follow the law.”