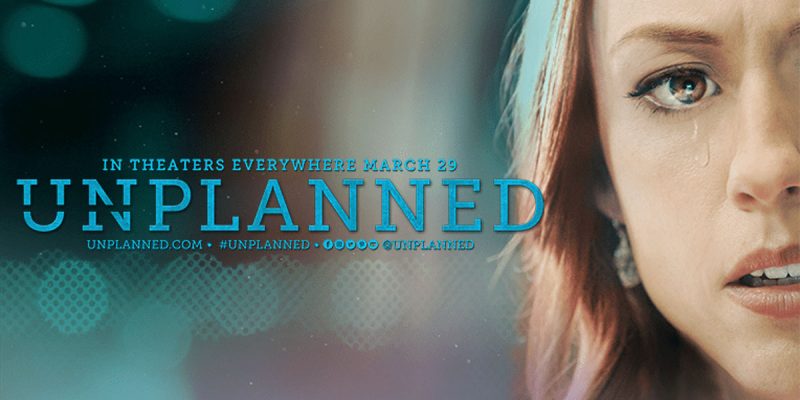 I’m going to be honest: I really didn’t want to see Unplanned.

There was no need for me to see it as I consider abortion abhorrent and a stain on American society, the most damning indication that despite our many blessings, freedoms, and prosperity that we live in a country where too many people look at our own flesh and blood as disposable “inconveniences” that could potentially get in the way of us living “our best selves”.

As a procedure, abortion is a violent medical practice that is so disgusting that Facebook slaps a warning cover over visuals of the act and the dismembered results.

I didn’t need to see the film to be any more Pro-Life than I already am.  And I dreaded the prospect of seeing the horrible act of abortion portrayed on the big screen.

But I’m glad I went.

Though I firmly believe that life begins at conception, I can appreciate how a reasonable person can be on the other side of the abortion debate, particularly since when I was a teenager I considered myself “pro-choice”.  Besides, I’m a guy, why should I care about what a pregnant woman does with part of her body?

Thusly abortion was not a big issue for me in politics.

But the nagging question that I blithely dismissed was if life did not begin at conception, then when?

As a kid I watched with fascination the 8-month along pregnant bellies of my mother and aunt move with the kicks of my unborn-but-very-much-alive brother and cousin.

At what point does the growing “clump of cells” assume baby status within the womb?

Apparently Mikey the seven year old had a much better grasp on this matter than Mike the teenager or for that matter, Andy (Cuomo) the New York governor.

Abortion is one of those very clear issues that confront a country, and it is because of that clarity that both sides tend to be deeply entrenched.  It is a debate between life versus liberty, though the rights of one of the responsible parties regarding the creation of a fetus may be ignored while that of the unborn are definitively disposed along with the body.

So why should a pro-life person watch a film that essentially preaches to the choir?

First, it promotes somewhat of an understanding of those individuals (that once included a younger me) who sincerely hold the contrary position. How can anyone hope to convince someone to think differently about a matter if you can’t appreciate where they are coming from?

In one-time Planned Parenthood director Abby Johnson we get a peek into the mind and life experiences that shaped her view.

We also get see what triggered her to walk away from her career and social vocation, as before she was a staffer Ms Johnson was a volunteer at Planned Parenthood.

Yes the film has graphic sequences, and one point people staggered out mid-film (I exited as well to provide assistance to one attendee who was overwhelmed by the results of Johnson’s use of RU-486).

But those disturbing scenes reflect what happens during pregnancy terminations.  And like any trip under a surgeon’s knife, including elective procedures, there is the risk of complications involved for the patient.

Those very hard scenes serve as a stout reminder of why those who champion the cause of life are willing to sacrifice political support and invite media belligerence for their stand.

Yes the Planned Parenthood executive is unfavorably portrayed but then again so are many of the men featured, including the doctor who works at the clinic, Johnson’s callous boyfriend who twice impregnated her (and stuck her with the abortion bill), and the more obnoxious elements of the anti-abortion protesters who can’t tell the difference between witnessing for life and attending a pro-wrestling match.

And yes the film has a cameo by Mike Lindell, aka the My Pillow guy, who helped finance the film’s production, though considering how bleak much of the movie is, it’s a welcome light-hearted moment.

The movie has been alternately savaged and mocked by the leftist political writers but I will say this: I’ve seen my fair share of terrible, poorly produced, and worse-acted conservative movies screened at CPAC and Unplanned isn’t one of those.

I’d say it’s no different in quality than what is offered by the Lifetime or Hallmark channels though neither would accept Unplanned’s advertising dollars.

Church groups and conservative activists have stepped up via social media to spread the word and fill the limited theaters where it has run.  With great success.

It was a full house when I saw it two weeks ago and Unplanned is still in select theaters.

Unplanned is a powerful film worth seeing.