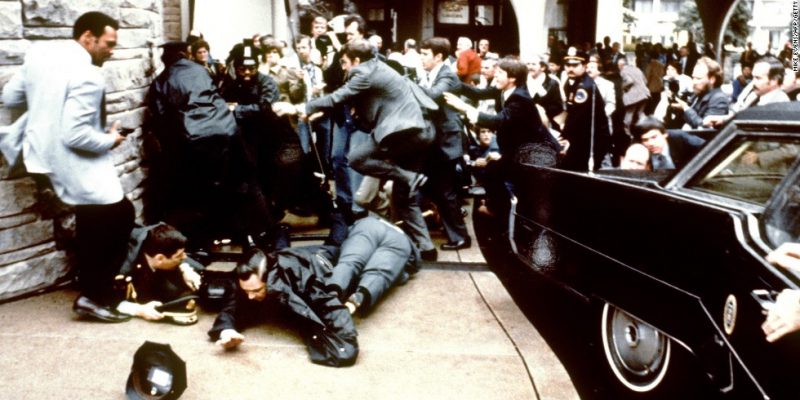 Today marks the 37th anniversary of the start of the John W. Hinckley Jr. trial. Hinckley was charged in the attempted murder of President Reagan and four others on March 30th, 1981.

President Ronald Reagan and three others were hurt after the shooting which took place near the Washington Hilton Hotel. President Reagan was hit by a bullet that ricocheted off the Presidential Limousine and hit him in the left lung, narrowly missing his heart. White House Press Secretary James Brady was shot in the eye and critically injured. D.C. Policeman Thomas Delahaney was shot in the neck.

Secret Service Agent Timothy McCarthy reportedly took a bullet to the chest for the President.

All four shooting victims survived the injuries sustained in the attack. President Reagan’s first term had only just begun and he went on to win re-election and solidify himself as one of the most popular Presidents in modern history. James Brady was permanently injured and remained partially paralyzed until his death in 2014.

Despite overwhelming evidence and witness accounts, Hinckley was acquitted of the attempted murders by reason of insanity. He was confined to the St. Elizabeth’s Mental Hospital in Washington, D.C. for more than 30 years.

In 2016, Hinckley was conditionally released to live at the home of his 90 year old mother in Virginia.

In 2018, a judge permitted Hinckley to move out of his mother’s house upon approval by his doctors.

President Reagan is known for his sense of humor even under stress. Before being wheeled in for surgery he quipped, “Please tell me you’re all Republicans.”