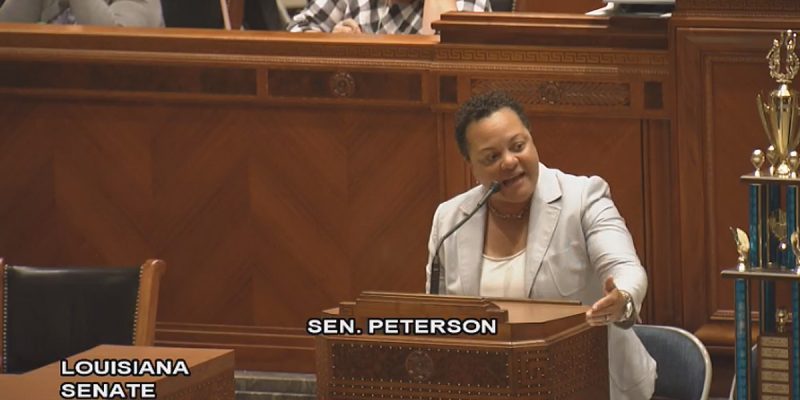 Yesterday there was a fairly anodyne bill which passed the Louisiana Senate with a 24-11 majority, and yet it was during debate on that bill where some of the ugliest and most ridiculous rhetoric of this year’s session spewed onto the floor. Thank Karen Carter Peterson, the chair of the Louisiana Democrat Party, for that.

The bill, SB 229 by Sen. Dan Claitor, is purely administrative. It creates a transition district allowing for sales tax collections in what would be the city of St. George in the event voters in that currently-unincorporated area in southern East Baton Rouge Parish choose to incorporate a new city in the ballot measure scheduled for a vote this October. The bill also puts the new city, should it be incorporated, on the hook for about $100 million in legacy costs run up by the city-parish government in East Baton Rouge.

Meaning that if you’re anti-St. George you probably still ought to be for the bill; if St. George is voted into being, not having the transition district wouldn’t give sales tax money not collected by the new city to the city-parish, at least arguably – it likely wouldn’t be collected at all. And the city-parish would be out that $100 million. Creating dysfunction in St. George doesn’t help function in East Baton Rouge.

Adults understand this. They understand there is no point in sabotaging the basic workings of a local government it isn’t within their purview to stop.

But Peterson isn’t an adult, despite the fact that by appearances and titles she appears as one. She lacks the basic maturity you would expect from an adult, much less a state senator and the chair of a state political party. This was obvious long before yesterday’s histrionics, which we’ll get to in just a minute. We knew it was true when she destroyed a fellow legislator’s birthday cake because it had a slightly politically incorrect theme, and we knew it was true when she invaded the House chamber to disrupt that body’s legislative deliberations and then proceeded to curse out one of its members for asking her to behave herself. And we also knew it was true when Peterson earned herself a summons for acting like an ass at a Baton Rouge casino after agreeing to a voluntary ban on her entry because she was a “problem” gambler.

It’s an extensive pattern of childish and stupid behavior on her part going back years, so if there was going to be someone who tried to start a race war on the floor of the Senate over what is essentially an administrative good-government bill, it would be Karen Carter Peterson.

And that’s what she did.

Long-simmering tensions surrounding the proposed city of St. George in East Baton Rouge Parish boiled over into the state Senate Wednesday, with the chair of the state Democratic party decrying the “racial implications” of the effort during debate over a proposal to create a transition district for the area.

State Sen. Karen Carter Peterson, D-New Orleans and head of the state’s Democrats, accused Republicans of trying to “blindside” Baton Rouge leaders with changes to a bill being considered on the Senate floor.

She also railed against the effort to create the city of St. George as “inherently wrong” and inefficient.

“It’ll be a God damn shame if this bill passes,” Peterson said.

The effort to create the city of St. George has been around in Baton Rouge for years but is expected to finally make it to the ballot for a vote this October. The movement is a divisive one in Baton Rouge, eliciting fierce debate in recent years. Baton Rouge businessman Eddie Rispone, a Republican candidate for governor, is one high-profile supporter of the movement.

Peterson said St. George is part of an ongoing effort to undermine the leadership of Broome, an African American woman, even after she passed a recent tax proposal for roads that helps the proposed area of St. George.

“There are some racial implications in this instrument,” Peterson said. “It is a hard fact. This is not my perspective, it is not my opinion, it is real.”

No – it is your opinion, Karen. There are black people in what’s going to be St. George – and if the migration patterns of the Baton Rouge area hold true, if the city incorporates within a generation there will be lots more of them thanks to black middle class folks preferring to escape the poor management and social pathologies increasingly taking hold inside the Baton Rouge city limits. That’s been true of Ascension and Livingston Parishes, which have seen growth in their minority populations alongside growth in per capita income – because quality of life is something black people like to pursue the same way white people do.

And quality of life is what’s driving St. George. Not race. It might be a sacrament of the Louisiana Democrat Party that Peterson chairs to demand race as the prerequisite to any public policy consideration, but real people don’t waste their whole lives worrying about that and it’s not what drives the St. George movement.

But what will drive the St. George movement from now on is Karen Carter Peterson. The people in that area are going to hear about what she said yesterday and they’re going to want to work even harder to have a city of their own that she can’t stop.

If she was an adult she would have understood that by opening her fat mouth in an attempt to defend Sharon Weston Broome she would all but insure Broome’s job would get harder. But she’s not an adult, and she proved it yesterday.