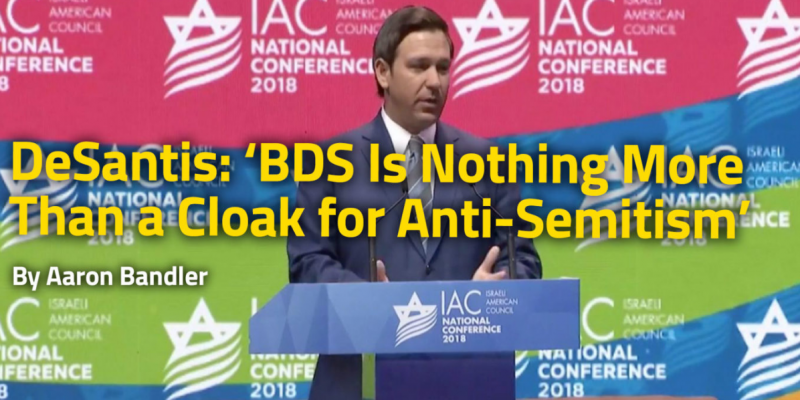 Republican Gov. Ron DeSantis of Florida is holding his Florida Cabinet meeting next month at the U.S. Embassy in Jerusalem, coinciding with a signing ceremony for a new law prohibiting anti-Semitism in the state.

On Monday, the Florida Senate unanimously approved House Bill 741 with all 39 members on the floor joining as co-sponsors. It was approved by the House one month earlier by a vote of 114 to zero. The bill requires public schools to treat anti-Semitism as discrimination, and anti-Semitic speech and acts as acts of racism.

DeSantis’s trip is slated over Memorial Day weekend from May 25-31.

GOP State Chairman Sen. Joe Gruters, R-Sarasota, who sponsored SB 1272, cited both attacks as reasons for the bill. He said, “Anti-Semitism is on the rise, and we have the ability to do something about it. No one is born with hate in their heart.”

The 19-year-old Poway synagogue gunman came out of 13 years of public school education, he noted, which reveals that “our education system has failed.”

“If we don’t do something now,” Gruters warned, “it will only get worse. I believe when the history books are written, it will be known that on this day, in this chamber, and at this moment, we made a statement against hatred.”

HB 741 amends the Florida Educational Equality Act by adding religion to the list of prohibited discrimination categories and adopts a 2017 definition of anti-Semitism. The definition was encoded by the Miami-Dade County city of Bal Harbour and endorsed by the U.S. State Department.

The bill was submitted in response to the Boycott, Divestment and Sanctions (BDS) movement, which he and DeSantis argue is nothing other than anti-Semitic.

The bill defines the BDS movement as a terrorist group no different than the KKK or ISIS.

It also amends Florida’s hate crime statute to specifically include anti-Semitism, which it defines “as a perception of the Jewish people, which may be expressed as hatred toward Jewish people.” Anti-Semitism includes:

Senate Minority Leader Audrey Gibson, D-Jacksonville, was the only lawmaker to vote against the bill when it was in committee. Within two days after massive public criticism she reversed her opinion.

Sen. Annette Taddeo, D-Miami, said the bill represents the concept of mitzvah, which in Hebrew means a moral deed as commandment of faith.

This is a revised version of a story first published on Watchdog.org.