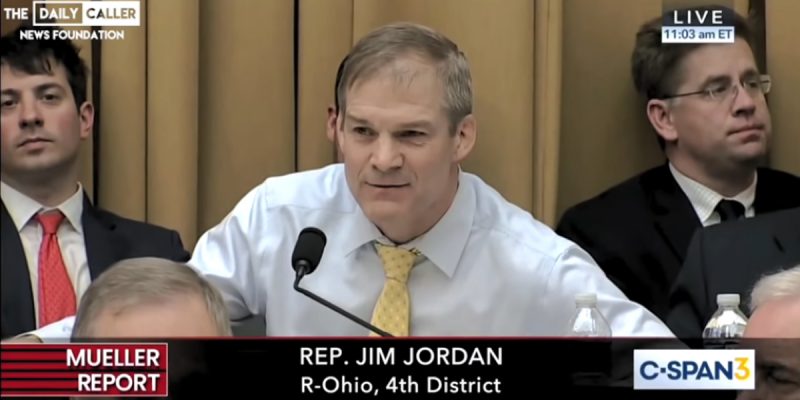 Kevin Boyd has a post up from earlier today on Rep. Mike Johnson’s rather scathing – but in Johnson’s typically nice and polite way – rebuke of the House Democrats racing to find Attorney General William Barr in contempt of Congress for refusing to break the law and issue them an unredacted copy of the Mueller report.

But I’d be remiss if I didn’t also give Rep. Jim Jordan, the head of the Freedom Caucus, his due – because Jordan was also pretty devastating to the House Judiciary Committee chair Jared Nadler, who has to be the least impressive human being ever to hold so high a position in this country, for the latter’s treatment of Barr and the circumstances surrounding that report.

Jordan lays out precisely how absurd this whole thing is, particularly when he notes that much of the redacted material Nadler is demanding be made public is grand jury testimony, which is by law held secret. To unredact that material and put the entire Mueller report out to the public would make Barr liable for criminal penalties under federal law.

And as has been said repeatedly since Barr began his interactions with Congress over the release of the Mueller report, the entire unredacted report is available for members of Congress to read in a secure facility at their pleasure – and none of the Democrats have bothered to take Barr up on his offer.

So what are they complaining about?

Well, obviously they want to keep the Trump-Russia narrative alive in every way they can, no matter how attenuated it might be, and more importantly as Jordan notes (and as I wrote in The American Spectator on Monday) they’ve got to demonize and discredit Barr before he fully gets rolling on his investigations of the origins of the Trump-Russia hoax, because therein is disaster for the Democrat Party.

In any event, this goes about five and a half minutes and it’s well worth your time…