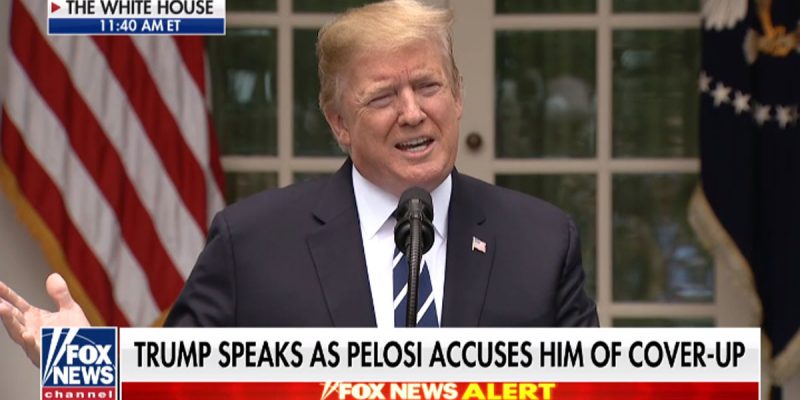 Clearly some members of the House majority think impeachment of Donald Trump is a winning political strategy. Otherwise the leadership of the Democrats’ caucus would be far more successful in tamping down the hysteria within their number, and that is most certainly not happening.

A rapid-fire string of developments has congressional Democrats putting increased pressure on party brass to launch impeachment proceedings against President Trump, with one rank-and-file lawmaker reportedly saying the president is “raping the country” and others indicating it’s only a matter of time before leadership changes course on the politically fraught issue.

Amid the internal tensions, Speaker Nancy Pelosi called a special meeting of House Democrats for Wednesday morning, where the impeachment issue and other battles are expected to be discussed.

Prior meetings involving Pelosi and top Democrats held Monday evening escalated into heated exchanges, with the party torn over how to address Trump controversies — most recently, the decision to block the former White House counsel from testifying.

Jazz Shaw of Hot Air says the “raping the country” moron is Steve Cohen, the fried-chicken-munching leftist from Memphis who routinely beclowns himself in front of the country. You’d be tempted to ignore the rantings of the Cohens of the world – except there are so many of them now, they might be the majority of the Democrats’ caucus.

And Shaw offered the obvious take coming out of that meeting…

Is it just me, or does anyone else picture Donald Trump sitting in the West Wing, rubbing his hands and just daring Pelosi to try it? If she really does start these proceedings, I’ll take a bite out of my fedora if Trump doesn’t tweet some variation of the phrase “bring it on.”

She may still stand her ground, but I’m getting the sense that Pelosi is getting ready to cave. As I mentioned yesterday, the Speaker is no doubt aware that any impeachment effort is going to fail in the end and it might just hand Donald Trump a second term while derailing the entire Democratic agenda until the next election. But if the drumbeats against her grow too loud, she could wind up losing the gavel at the hands of her own caucus. Not an enviable position for the top Democrat to be in, but hey… she asked for the job.

And of course Shaw was correct. Right after the Impeachment Caucus meeting, Pelosi and Chuck Schumer were scheduled to sit down with Trump on the question of the $2 trillion infrastructure bill they’d agreed in principle to pursue – and Trump decided he’d spring a trap on Pelosi…

President Trump on Wednesday demanded Democrats end what he called their “phony investigations” before he’ll negotiate with them on issues like infrastructure, as he delivered a fiery statement from the Rose Garden after cutting a meeting short with House Speaker Nancy Pelosi and Senate Democratic Leader Chuck Schumer.

The president had met for mere minutes with the two Democratic leaders in a session scheduled to discuss a possible bipartisan infrastructure package. But moments before that sit-down, Pelosi accused Trump of having “engaged in a cover-up” regarding the Russia probe.

Trump suggested the comments, and the numerous investigations into him, prevented them from negotiating.

“You can’t do it under these circumstances,” Trump said. “Get these phony investigations over with.”

The president said he wanted to pursue an infrastructure proposal, but “instead of walking in happily into a meeting, I walk in to look at people that have just said that I was doing a cover-up.”

One source told Fox News Trump walked into the Cabinet Room and immediately made his comments to the Democrats in the room. Then, as Pelosi began talking, Trump turned on his heel and walked back to the Oval Office.

Schumer, back at the Capitol, said Trump’s decision to bolt the meeting and address the press in the Rose Garden was hardly spontaneous. Speaking alongside Pelosi, he called it a “pre-planned excuse” — citing the ready-made sign about the Russia probe that Trump had at the podium.

“We are interested in doing infrastructure,” Schumer said. “It’s clear the president isn’t. He is looking for every excuse.”

In later tweets, the president said, “So sad that Nancy Pelosi and Chuck Schumer will never be able to see or understand the great promise of our Country.” He also said, “Nancy, thank you so much for your prayers, I know you truly mean it!”

In the Rose Garden, the president stood at a podium displaying a sign that said “no collusion, no obstruction.” He also lashed out at media for their coverage of the Russia probe.

“This whole thing was a takedown attempt at the president of the United States, and honestly you ought to be ashamed of yourselves for the way you reported so dishonestly,” he said.

What Pelosi and Schumer don’t seem to understand, or perhaps they do understand it and they’re powerless to do anything about it, is that while Trump wants an infrastructure bill he’s got a major problem with his own party in that regard. Republicans on Capitol Hill aren’t going to mobilize behind a bipartisan infrastructure bill which is sure to include all kinds of Green New Deal-style trash projects the Democrats will insist upon, especially when the Democrats are also going to insist on soaking the rich and the business community to pay for them. There isn’t a way forward on an infrastructure bill while Pelosi is the House Speaker and Schumer has enough votes in the Senate for a filibuster.

So for Trump, the way to get an infrastructure bill is first to get working majorities in both the House and Senate in January of 2021 after he’s re-elected. Then he can work with the congressional GOP on something that includes lots of public-private partnerships, budget prioritization and intergovernmental pay-fors rather than tax increases, block grants and the like – and sticks to actual infrastructure like roads, bridges, airports and maybe rural broadband instead of a fresh round of Solyndras and public employee union payoffs.

How best to do that?

Easy – you paint the Democrats as incapable of governing, using something the public is already at least suspicious of.

And there is the impeachment mess, front and center.

By not tamping down the Steve Cohens and Jared Nadlers of the world, Pelosi has given Trump the bargaining chip that it’s time to drop all the idiotic investigations and govern like adults if she wants to do business with him and have something to show for the last two years. And Trump is obviously playing it – he’s going to message that he wants to build that bridge in your town, but before he’s got any chance to do that your Democrat congressman has to lose re-election so Nancy Pelosi doesn’t run the House anymore.

You can’t give an operator like Trump that much rope to hang you with. He will. And pushing impeachment against a public which is decidedly opposed to it and in any event will not result in Trump’s removal only insures that (1) nothing will get done in this congress and (2) it’s going to be Pelosi’s fault.

Most of this is just basic politics. It’s striking that the majority of the Democrats’ caucus on Capitol Hill can’t see it.

Interested in more national news? We've got you covered! See More National News
Previous Article Louisiana graduates enrolled in college is at all-time high
Next Article How Much Of A Scumbag Is Michael Avenatti? This Much