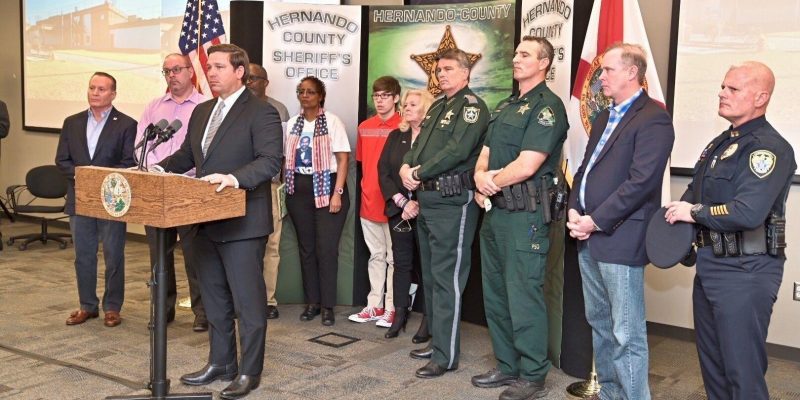 The Florida Legislature passed a bill Saturday that is expected to be signed into law by Republican Gov. Ron DeSantis that will ban “Sanctuary Cities” in Florida– and require local jails and prisons to detain illegal aliens charged or convicted of a crime for 48 hours past their release dates. The additional hours will give federal Immigration & Customs Enforcement [ICE] agents more time to pick them up, and process them for deportation.

The law also gives the governor authority to initiate “judicial proceedings” against local officials who do not cooperate with federal immigration authorities, endorse “sanctuary city policies” or implement “sanctuary jurisdictions.”

“Sanctuary cities” are self-proclaimed jurisdictions whose mayors and city councils have directed their local police to not work with or assisting federal immigration enforcement efforts. People who are in the U.S. illegally, including criminals, are protected from being deported, even though by doing so is against the law.

The bills, SB 168 and HR 527, passed in their respective chambers and prohibit state, city, and county “law enforcement agencies from having policies that impede communication or information sharing with ICE [Immigration and Customs Enforcement] and gives them a procedure to follow when someone who was arrested cannot provide proof of citizenship or legal residency or is subject to an immigration detainer.”

The American Civil Liberties Union (ACLU) is expected to challenge the law in court, arguing Florida doesn’t have any sanctuary cities. But according to Breitbart News, three counties are actively not enforcing the law and refusing to cooperate with ICE.

Alachua County still refuses to turn illegal aliens over to ICE even after a foreign national is accused of a crime. West Palm Beach County currently bans local officials from aiding ICE with investigations into criminal illegal aliens. And Miami-Dade County, a former sanctuary city, only reversed its policies after receiving threats from President Donald Trump’s administration.

After the Legislature passed the measure, DeSantis tweeted:

I thank the Florida Legislature for presenting me with a bill that upholds the rule of law and addresses sanctuary cities and counties in Florida. We are a stronger state when we protect our residents, foster safe communities and respect the work of law enforcement.

“People in our country illegally who commit crimes must not be released back into our communities where they harm others,” Pinellas County Sheriff Bob Gualtieri said in the statement. “The Warrant Service Officer program allows sheriffs to lawfully help ICE keep criminal illegal aliens in jail and off the street by serving ICE arrest warrants. The WSO program helps enforce the rule of law and keeps our communities safe.”

With more than 4.1 million illegal aliens, legal immigrants, and foreign-born naturalized citizens, Florida comes in fourth behind California, Texas, and New York with the largest foreign-born populations in the U.S.

California, a sanctuary state, has almost as many foreign-born residents as New York, Texas, and Florida combined, with more than 10.5 million illegal aliens, legal residents, and foreign-born naturalized citizens living in the state, according to Breitbart News.