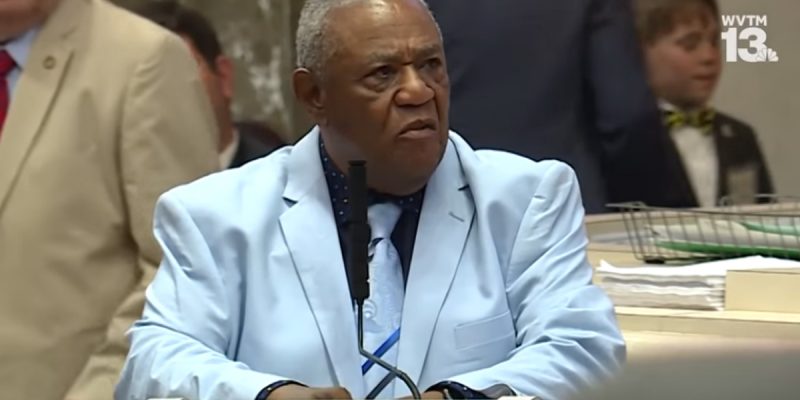 Turnabout, it seems, is fair play. And that’s likely to be proven in Alabama next year.

Why do we say this? Well, today’s announcement by John Rogers, the abjectly insane state representative from Birmingham who has been all over the news in recent days for loopy statements about abortion and accusations that Donald Trump, Jr. is “retarded,” that he’s going to run a primary challenge against that state’s U.S. Senator Doug Jones is quite possibly a textbook example of turnabout biting the Democrats.

You remember this guy, right?

And then it got worse…

And then today it descended into sublime chaos…

Alabama State Rep. John Rogers (D-Birmingham) announced a U.S. Senate campaign, challenging Sen. Doug Jones (D-Ala.) in the Democratic primary for 2020. Jones was Rogers’ personal attorney. The state representative has become notorious for defending abortion, saying of unwanted babies “kill them now or kill them later.” He dehumanized unwanted babies, suggesting that their lives would not be worth living and that they would end up in the “electric chair.”

Surely there will be another half-million in pledges for Rogers from Republican donors, because who wants to run against Jones when this nincompoop is available to drag down the Democrats’ slate of candidates?

Rogers first made a splash when he suggested that it was more humane to kill unwanted unborn babies in the womb than to let them live, have them turn into criminals, and be executed.

“It ought to be a woman’s choice,” he said of abortion. “Some kids are unwanted. So you kill them now or you kill them later. You bring them into the world unwanted, unloved, then send them to the electric chair.”

His comments triggered loud backlash, including from Sen. Jones. Jones condemned the remarks as “outrageous.”

“That is one of the problems with discussing these types of issues, people get emotional and people tend not to respect each other’s opinions as much, and you end up with comments like this. It is very, very unfortunate and I condemn it in the strongest possible terms,” Jones concluded.

Yet on Monday, Rogers claimed that Jones called him up after the comments, telling him that the state representative was right about abortion.

“Well, he called me twice. He told me, ‘John, I know you’re right but I got to come out against you,'” Rogers told Talk 99.5 radio host Matt Murphy. He then told the U.S. senator that was acceptable. “I said, ‘Okay,’ I said, ‘If it’s going to help your campaign, do that.’ That’s the kind of guy I am.”

In a second call, Jones yelled at Rogers, the state representative said.

In a statement to PJ Media, the sitting senator denied having told Rogers he was correct.

“Look, we are just going to have to agree to disagree on this,” Jones told PJ Media in a statement. “I made my position clear. I thought his remarks were appalling and I told him that I strongly disagreed with him. There is already too much division in our politics and I won’t add to it here. With that, that’s all I’m going to say on this matter.”

“Don’t nobody call me on the phone to tell me to be quiet. I don’t care if you’re the president or you[‘re] the senator … the last person that ever chastised me was my mother and my father. And they both passed,” the state representative declared. He said he told Jones “to go where the sun [doesn’t] shine.”

Let’s remember that Jones, who is about as close to a post turtle as there is in the U.S. Senate, only won that 2017 special election because the Republican nominee, Roy Moore, turned out to be thoroughly and completely unelectable in a general election thanks to a flurry of accusations that he had pursued too-young girls while a 30-something bachelor before getting married to his current wife of long standing. Moore’s campaign was a mess even beyond those accusations, which were clearly excessive in most respects, and Jones was able to win a race no Democrat had an opportunity to.

But Moore, who had built a reputation as an uncompromising conservative who wouldn’t be corrupted by the D.C. swamp, had been able to defeat a pair of more-electable Republicans – including then-incumbent Luther Strange, who had ascended to the Senate from Attorney General via a gubernatorial appointment following Jeff Sessions’ appointment as U.S. Attorney General – in the state GOP primary.

And that might be the exact same situation the Democrats could find themselves in next year. Because Rogers, while being clearly nuts and offensive to any decent folks, has the benefit of demographics on his side. Jones won the 2017 race against Moore with black voters being 30 percent of the turnout (out of 1.35 million voters), and got some 96 percent of that black vote per exit polls – meaning that some 388,000 of Jones’ 674,000 votes were black votes. We also know that lots of Jones’ vote in that 2017 election came from Republican and Independent voters who wouldn’t be voting in a Democrat primary – so while in Alabama party affiliation isn’t included in information collected during voter registration it’s a pretty good bet that most of the voters in an Alabama Democrat primary are going to be black.

And if Rogers can make the race a straight black-vs-white identity politics contest, that’s precisely how he can win.

The Republican side of that field isn’t firmed up by any means yet, though former Auburn, Ole Miss, Texas Tech and Cincinnati football coach Tommy Tuberville’s reported entry into the race could make things interesting. But it really doesn’t matter – even Moore couldn’t lose the race if Rogers is the Democrat emerging from the primary.

And for all the Democrats who’ll doubtless be screaming about Rogers getting into the race, you can bet there will be just as many Republicans begging him to stay in it. He’s too perfect an opponent, no matter who the GOP nominates.