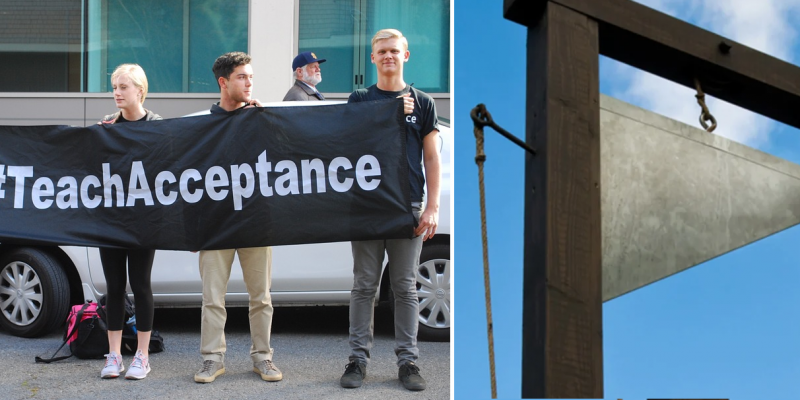 A radical cell on a college campus with historic ties to groups that have called for the deaths of tens of millions is now messaging about the return of the guillotine for all “traitors.”

The doctrinaire group has recently messaged that not a single one of their board members deviate from defined parameters of sexual behavior. The campus cabal has made efforts to enforce their beliefs via changes to university curriculum that favors their agenda.

Members have been arrested several times attempting to block the protected free speech rights of individuals on campus, including students and non-student visitors.

Yet it’s a recognized student organization at Texas State University.

“We are students organizing in our universities, colleges, and high schools to fight for the immediate needs of workers and students while building our capacity to fight for more radical and structural changes,” a free plug on the university’s website states.

According to conservative campus free speech watchdog Campus Reform, the chapter of YDSA recently messaged that all of their executive board members fit into the spectrum of Lesbian, Gay, Bisexual, or Transgender (LGBT) activity. In other words, they brag about there being no straight people on their leadership board. The young communists even had a clever acronym for LGBT, as Campus Reform reported:

The Young Democratic Socialists of America (YDSA) chapter at Texas State University boasted on Twitter about not having any straight members on its E-Board and Coordinating Committee after calling to “guillotine bourgeoisie traitors.”

The YDSA chapter of Texas State University published a “happy pride month” post on its Twitter account Monday, along with an alternative acronym for LGBT, “Let’s Guillotine Bourgeoisie Traitors.”

In the following post, the chapter also gave a “shout out” to the fact that the group’s E-board and Coordinating Committee “has literally no straight people on it.”

No university entity is calling for the removal of this proudly exclusive Socialist organization from campus. But on the other end of the spectrum, conservative organization Turning Point USA was a hair’s breadth away from being denied recognition as a campus group during the spring semester.

According to the campus newspaper, the University Star, the center-right conservative student government organization approved legislation to have the Turning Point USA removed from campus on the grounds that it “promotes hate speech and endangers the safety of students and faculty.” The resolution was vetoed by the student government president in late April. This drew the attention of Gov. Greg Abbott who questioned via Twitter whether Texas State should be taxpayer-financed if it is to discriminate in such a way.

“YDSA fights for democratic socialism through active campaigns to improve the lives of working people,” the national organization’s website reads. But it apparently does nothing to further dialogue between socialism and capitalism.