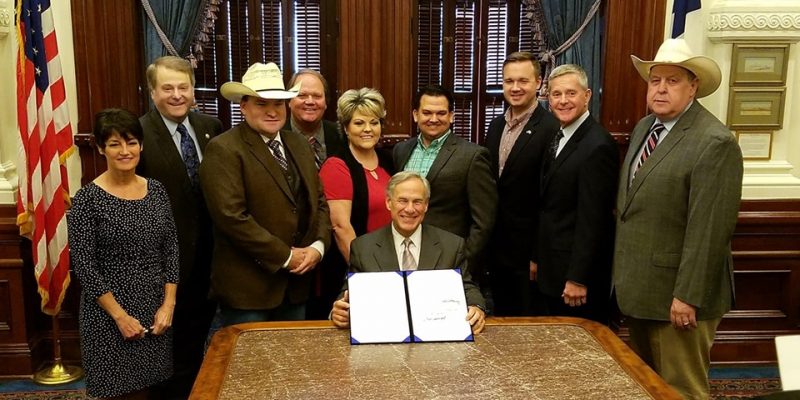 Originally, residents in only the 10 most populous counties in Texas had the chance to vote on whether they could be annexed by a city.

Now all 254 counties are covered by a law to end forced annexation as HB 347 was signed by Gov. Greg Abbott last week. His signature gave preference to the House plan over the Senate plan as a similar Senate bill was vetoed (see analysis below). There was not much fanfare, though observers have referred to it as one of the most significant bills of the session.

The original law created two “tiers,” which are now done away with. Counties in the first tier, with 500,000 population or less, were largely unaffected and could still be easily annexed by a city or other taxing entity, though residents had the power to “opt-in” to the second tier via an election. A handful of counties opted in with overwhelming majorities in favor. Only Texas’ 10 largest counties were automatically included in the second tier where the elections were mandatory unless the targeted land was uninhabited or only sparsely populated.

HB 347, by Phil King, gives all property owners, regardless of county population, a vote on proposed annexation by a nearby city — but only as long as the geographic area being targeted for annexation has at least 200 residents.

Municipal lobbying groups opposed the bill strongly, and Austin Mayor Steve Adler lumped this bill in with others as part of a “war on cities.”

An amendment postponing the law from going into effect in Cameron County passed.

From the hip: Abbott’s signature on the House bill gave support to one of two plans presented to him. The Senate plan, SB 746, was also sent to the Governor’s desk, but was vetoed. It would have carried a relaxed petition requirement for a county to be taken from one tier to the other, but was in most respects similar to the House bill. Interestingly, the companion bill, HB 22479, was eligible for consideration for a floor vote but never quite made it that far. In the waning days of the legislative session, given the risk of breakdowns regarding other important measures (school finance as one glaring example) that this was one of those situations where the two chambers, rather than duke it out over the (relatively minor) details, agreed to send each others’ bills to the Governor’s desk allowing him to decide.

Interested in more news from Texas? We've got you covered! See More Texas News
Previous Article Martiny And The Video Poker People Fouled Up The Fantasy Sports Bill Yesterday
Next Article The Infrastructure Bill Has Some Good Points To It, But Once Again The Senate Fouls It Up