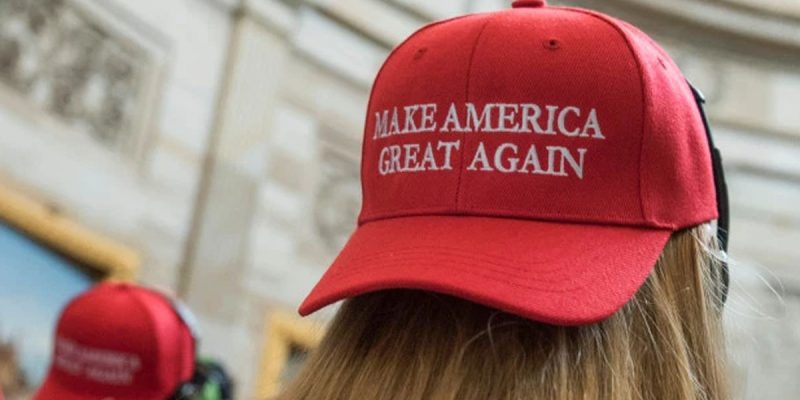 Cutting through the fog of the 24 hour “news” cycle, the 2020 presidential election is really a simple affair. In fact it has already resolved itself into a conflict between three philosophies that would guide the future of the American people for decades to come.

The clear alternatives offered to voters are captured by political slogans; “Make America Great Again,” “Make America America Again” and “Democratic Socialism.” That’s it, three choices, each leading to different conclusions and each offering different outcomes to our citizens.

So if you will indulge me I will attempt to define these positions through my personal political lens.

This was the campaign slogan that helped elect President Trump and that will be displayed prominently in his re-election campaign. In order to understand its significance we must flash back to the political history of our nation since perhaps the end of the Presidency of Ronald Reagan. These were years of declining American prosperity and international prominence. It all culminated in the Presidency of Barack Obama. His eight years were best understood when he started his tenure with an apology tour of the world. I never did understand what we were apologizing for, as after all had it not been for America we would all be speaking German or Russian, but I suppose that it all sprouted from the belief of the American Left that we are an evil people for being so prosperous at the expense of other countries. A belief grounded in a One World philosophy, a belief of universal sharing of wealth and abandonment of the principles of personal agency that made America the powerhouse of the world.

President Trump brought a new vision, a vision that American prosperity was in free fall because of the political actions or inactions of the last decades. A vision in stark contrast to that of President Obama. A vision that is rightly recognized as a threat to the American Left. His successes have shown the fallacies of decades of liberal policies and promise to end their supremacy in American thought. The result has been the rabid reaction of Democrat politicians and their media allies against the Trump Presidency in advance of the 2020 cycle.

President Trump would make America great again by strong economic and foreign policies that would overthrow years of weakness. The goals that he made more than clear include a stronger military, a foreign policy based upon assertive diplomacy, a willingness to negotiate with foreign enemies but a refusal to buy their appeasement, a systemic unraveling of bureaucratic control over our people, a vision of economic success resulting from reducing taxes, a reduction in social dependence upon government, a goal to bring home expatriated manufacturing, a plan to become energy self-sufficient, and a fundamental strategy to increase American worker prosperity by limiting competition from illegal immigration.

In a short few years America foreign policy and national prosperity have seen remarkable gains from this massive change in direction of economic/political philosophy. In effect these principles unwound decades of government centralization, philosophical swings toward left wing ideals, and belief in policies that would have led to that One World. In effect they focus on increasing America’s prosperity that was being sacrificed on the altar of some form of utopian vision. President Trump’s promise to make America Great Again through his vision was clearly defined and despite his somewhat peculiar personality traits he has not deviated from those promises.

This slogan, co-opted from another candidate by Vice President Biden for the 2020 election, is based upon a philosophy that, though undefined by him, is as clear as can be. The interpretation can be nothing else than a veiled attempt to link his candidacy to the policies of President Obama and his predecessors. In effect this slogan assumes that the track that we are currently on under President Trump is a bad thing.

In order to accept this logic one would have to believe that the decline of US influence and a weak economy are the best we can hope for. Perhaps the best image of that belief was when President Obama, in attacking then candidate Trump, rhetorically asked how he planned to improve the economy and that he didn’t have a magic wand that would bring business back to America. In effect he was describing his vision of a new normal conceived out of his domestic and international policies, policies in which he visualized America as just another weak country among a world full of weak countries.

Very specifically, particularly for the 2020 election cycle, that is what “Make America America” entails. An acceptance of big government, weak military, policies of appeasement, and an assumption that slow growth, high taxes, and massive social structures are the best we can hope for. In effect it marks the end of the American Dream.

Of course candidate Biden and the other so called moderate Democrat 2020 candidates won’t explain those outcomes. Their goal is to latch onto the popularity of the last President and to use the dual tactics of fear and jealousy of those who have more than others.

The latest catch phrase, especially among young voters, is purposefully not defined by proponents. It is not defined because in effect America is a Democratic Socialist state now. Starting in the late 19th century American liberal policies have had one driving force, turn the nation into a liberal socialist democracy. Our national policies are a reflection of a century or more of “Progressivism” which in effect has the very same socialist underpinnings that are seen in the Left’s much-revered European policies.

One could believe from the rhetoric that the Democrat Party’s goal for 2020 and beyond is to make America just a more socialist country, but there is a much more sinister issue at play. Despite what the media and so many others like to opine on, when dissecting the policies of the most extreme Democrat candidates what one finds are not an increase in European style socialism. No, they advocate a full-blown socialist system, a system in which freedom – as defined in the Bill of Rights – is sacrificed as government controls all. Socialism is a fundamentally unsustainable economic model that requires a very strong government structure to keep the whole thing afloat. And history has shown that this miscreant system has a relatively short life expectancy. But that is the unspoken goal of the far Left.

Deception and subversion are the underpinnings of those promoting “Democratic Socialism.”  Naiveté is the best descriptor of those who believe it offers a better life than that currently enjoyed in the most prosperous major country in history.

These three slogans clearly lay out the alternatives in the choice that Americans will make on election day. For the next many months we will be assaulted by proponents of all three positions but in summary the options are clear. “Make America Great Again” assures a continuation of policies that promise a better future by strengthening America by unwinding failed policies of past decades. Policies whose outcomes are marked by a decline in American influence and prosperity.

“Make America America Again” promises that we will return to those very same policies that President Trump would steer us away from. Pretty simple choice. If you liked international and domestic weakness in the name of playing fair with the rest of the world this is the option for you. But be prepared for the results, lowering prosperity and an absolute requirement of growing international appeasement.

Finally “Democratic Socialism” offers some a vision of European socialist states that of late have turned away from the very socialism that extreme Democrat candidates are espousing. And in fact we have seen the result in our own hemisphere. In Venezuela the government has become dictatorial as it tries to support an economic system that by natural laws cannot survive on its own promised virtues. The socialism being offered by Democrats is assurance of a forfeiture of American freedoms.

Perhaps it is a blessing that the three choices are abundantly clear. There can be no voter who doesn’t understand what their vote promises in 2020.

Interested in more national news? We've got you covered! See More National News
Previous Article SICK: California school has “condom race” for 10-year-old girls to learn how to use them the fastest
Next Article Remembering a Miracle: Scalise Reflects on Surviving Shooting