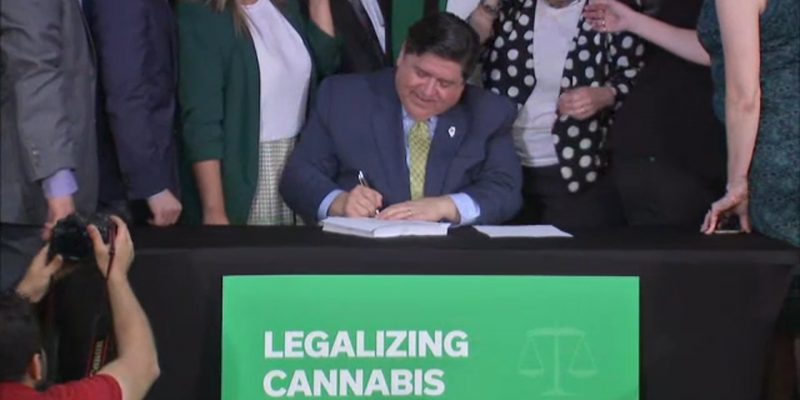 Governor J.B. Pritzker (D) on Tuesday signed HB 1438, a bill legalizing the adult-use of marijuana, making Illinois the first state to do so through the legislative process rather a voter referendum.

In addition to legalizing cannabis use for adults over 21, the new law establishes a tax and regulatory system on all sales. Tax revenues will be used to expunge roughly 800,000 past convictions for minor marijuana offenses and also go toward drug enforcement, treatment and mental health services. Any surplus goes into the state’s general fund.

Governor Pritzker was excited about delivering on a campaign promise saying,

“The war on cannabis has destroyed families, filled prisons with nonviolent offenders, and disproportionately disrupted black and brown communities. Law enforcement across the nation has spent billions of dollars to enforce the criminalization of cannabis, yet its consumption remains widespread.”

Rep. Kelly Cassidy (D), a cosponsor of the bill, praised its passage saying,

“It’s time we hit the reset button on the War on Drugs. We have an opportunity today to set the gold standard for a regulated market that centers on equity and repair.”

Steve Hawkins, the Executive Director of Marijuana Policy Project, a group that helped draft the bill said it will “help correct the injustices of prohibition”.

The Governor held a ceremonial signing located in Chicago’s West Side, a symbolic choice to highlight the fact that the new policy will benefit poor, black neighborhoods.

“Today we’ve given hundreds of thousands of people the chance for a better life,” Governor Pritzker declared.

A limited number of dispensaries will be allowed to apply for the required license with a cap in place until a review of the initial program roll-out is conducted.

Illinois is the 11th state to legalize recreational marijuana.